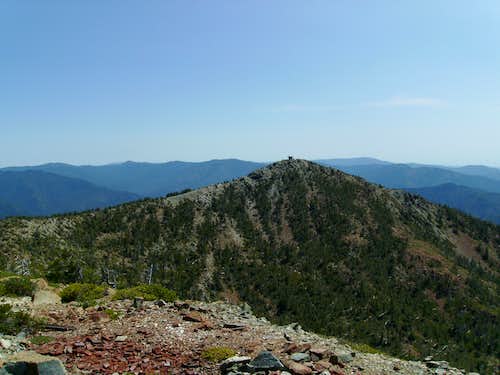 The westernmost Siskiyou peaks over a mile in elevation, Ship Mountain can be seen from as far as 15 miles off the coast. These four peaks tower over their surrounding terrain, none of the hills to the west come within 2000 feet of their height. With the coast such a short distance away (18 miles) and the sharp relief, the peaks receive a lot of precipitation most of it falling as snow. Most years the peaks glisten white from late November to early May. The four white triangles do resemble the sails of a ship when viewed from the ocean.


The best views in Del Norte county can be seen from the top of any of theses peaks. A small sliver of the ocean can be seen from numerous Siskiyou peaks but from here you are greeted with a 180 degree panorama of the coast. To the east lie the jagged granite and serpentine spires of the Siskiyou wilderness, and on clear days Mount Shasta is visible. 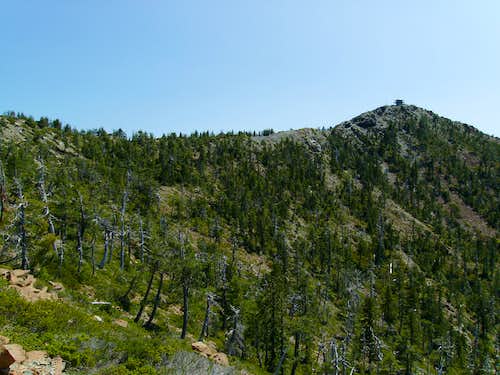 The four peaks are known individually as the Four Brothers.

From north to south

No. 1 Elevation 5282 The small and stagnant ship mountain lake sits in a cirque at the base of this peak.

No. 2 Elevation 5301 Accessible by a short scramble from the 3rd brother

No. 3 Elevation 5311 Contains ruins from an old lookout tower, can be accessed by a difficult to find trail.

No. 4 Elevation 5304 Contains a newly constructed staffed lookout tower. A road goes all the way to the summit, however it is not wise to drive it (more on that later) 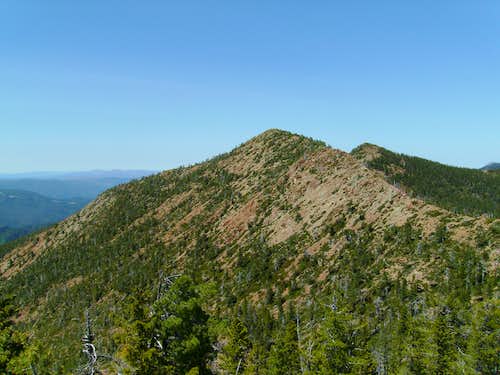 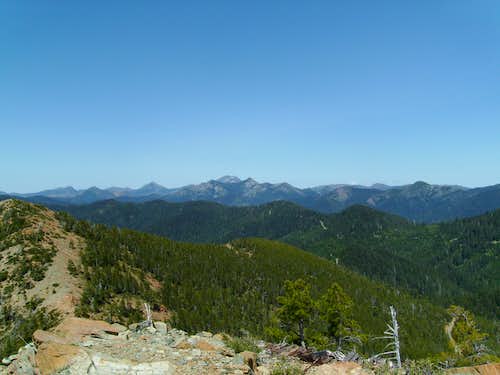 There are two main routes for accessing the peaks, both are about the same distance and require 7 miles on well graded dirt roads suitable for passenger cars.

1. Heading north from Crescent City on US 199 turn just past Hiouchi on South Fork road. After 15 miles you hit the community of big flat and the road turns to gravel. You are now on Forest route 16N02. Pass the turnoff to Musclat lake, and continue on for 7 miles. On your left is a turn off to the lookout.

2. Heading north from Crescent City on US 199 turn onto Little Jones Creek road after 30 miles. Drive 11 miles until the road turns to dirt. Head straight at the turn off to doe flat for another 6 miles . On your right is the turn off to the lookout.

Once on the lookout access road continue up for several hundred yards to a large parking area. DO NOT DRIVE PAST THIS POINT. The lookout is staffed most of the year and so there is already a vehicle on top. The summit area does not have enough room for two vehicles and if you go further you will have to back down a steep rocky road on an exposed ridge-line.

From here you can walk the remaining hundred yards to the summit of the fourth brother. The lookout man is very friendly and has been doing this job almost as long as I've been alive. I've been up here numerous times spaced years apart and each time he gave me the same tour, pointing out Mount Shasta and other landmarks I wouldn't be able to decipher without his aid.

If you plan to summit Ship mountain and not one of the individual brothers then your goal is the next peak, in the line (No. 3). There is a well graded trail to its summit but finding where it starts is impossible. Instead follow the ridge north from the parking area, and eventually you will hit the trail.

The next “brother” (No. 2) is a short scramble from the last. A faint use trail can be found here and there.

Scrambling to the first brother is a bit more complicated. The final peak is on a different ridge line that the other three and is separated from its brothers by the cirque containing ship mountain lake. Pick your route carefully trying to avoid the loose rock over the lake. 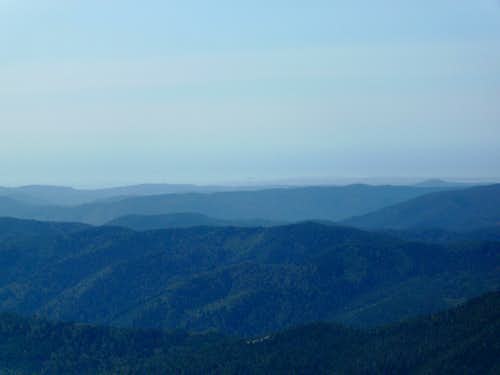 View of the Pacific on a hazy day

The roads on both sides close around November and stay closed until the snow melts out. If you want to camp outside a designated campground you will need a California campfire permit. 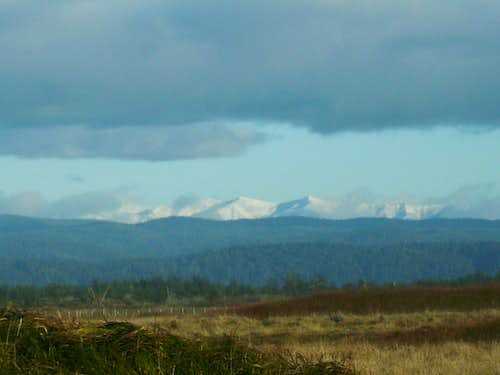 US 199 has several good campgrounds near Gasquet. I would assume camping near the staffed lookout is not allowed but anywhere else in the national forest should be OK. 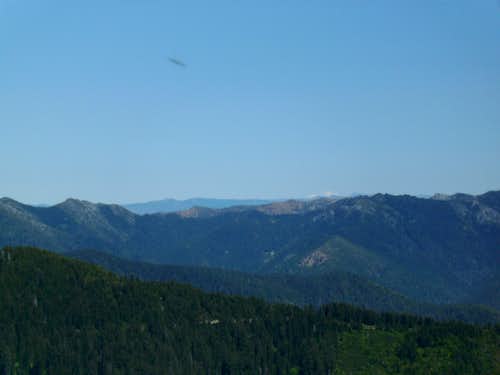 Mt Shasta in the distance

Info on the new Lookout