The Romariswandköpfe from the east

To the south east lies the Großglockner, the highest mountain of Austria,
but from the summit you won't see much of it, as it is all but hidden by the Glocknerwand, which is almost as high. Still, no matter what route you choose, you'll have plenty of viewing opportunities along the way. Johannisberg (and, in the distance, the Großes Wiesbachhorn) from near the Schneewinkelscharte on the NW ridge of the Romariswandkopf
The slightly lower north west summit is 3491m high, the main one 3511m. The German word "Kopf" means head, hence, the name stands for "Head of the Romariswand", which makes sense as the summit is the culmination of the "Romariswand", the big south ridge of the mountain. The plural of "Kopf" is "Köpfe", and the mountain is sometimes called "Romariswandköpfe", emphasizing that it has more than one summit. 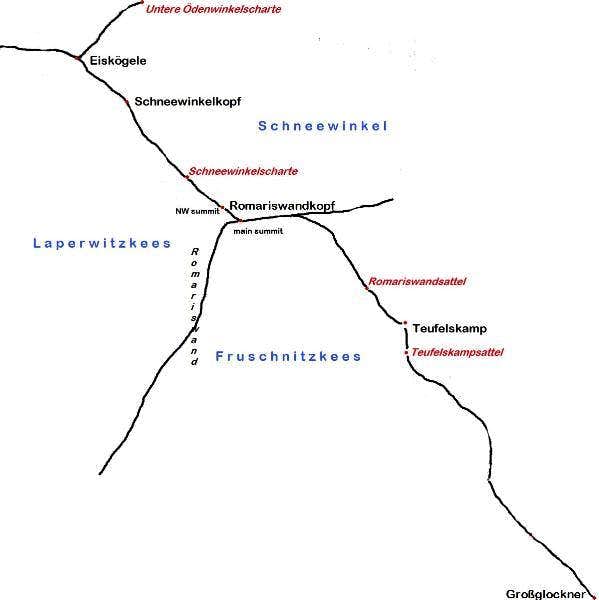 There are three ridges leading to the summit: to the north west, to the south and to the east. After about 500m east, the east ridge starts to drop quite quickly to the Oberster Pasterzenboden glacier. At the same point, another much longer ridge extends south east to the Romariswandsattel (3426m), the Teufelskamp (3511m) and Teufelskampsattel (3503m) and beyond, eventually culminating in the Großglockner. As the Romariswandsattel is the lowest point on this ridge, the Romariswandkopf has a prominence of only 85m.

The south ridge is called the Romariswand. From the east, this ridge is not all that impressive, but the western slopes are pretty steep.

To the north and east lies the big Oberster Pasterzenboden, the catchment area of the large Pasterze glacier. The area north of the Romariskopf, while still part of the Oberster Pasterzenboden, has a separate name, the Schneewinkel, which literally means Snow Corner.
To the south and south east lies the Fruschnitzkees (kees=glacier), which is relatively flat in its upper ranges.
Finally, to the west (and far below) lies the Laperwitzkees.

The two best starting points for climbing the Romariswandkopf are the two closest mountain huts, the Stüdlhütte and the Oberwalderhütte.

To the south lies the Stüdlhütte (2802m) (47.0548,12.6811), a fine mountain hut. I especially liked the all you can eat style buffet, as I was very hungry when I got there! It is usually a bit crowded, because it lies so conveniently close to the Großglockner. In fact, that's why it was built there in the first place.
The nearest road ends at the Lucknerhaus, in the Ködnitz valley to the south. It takes about 3 hours to walk from there to the Stüdlhütte.
The Lucknerhaus can be reached by bus or by car. For public transport, go to ÖBB and search for the destination Lucknerhaus. By car, from the road between Mittersill and Lienz, take the turn off to Kals am Großglockner and drive up the Ködnitztal to the end of the road (toll).

Note that the high alpine Glocknerstraße can be closed at any time of the year due to bad weather, although in summer that doesn't happen very often, and it's closed in the winter season from early November until early May. Prayer flags on the summit - there is no cross
From the Stüdlhütte, the normal route to the summit goes north over the Teischnitzkees alongside the Luisengrat (as it happens, this is also the start of the very popular route to the Stüdlgrat ascent of the Großglockner, so you won't be alone).
Around 3200m or so, leave the trail to the Stüdlgrat and head NW, to the Gramulsattel (47.075,12.675) and over to the Fruschnitzkees.
Now head NNE across this glacier to the Romariswandsattel. On, or shortly before this saddle, turn west, and follow either the east ridge or, a bit easier, the glacier just south of it. The last part to the summit has no glacier anymore. Be careful when you reach the main summit, it drops steeply to the other side!
If there is enough snow, it's possible to ski down to the south straight from the summit.

The first ascent route went over the Gramulsattel as well, but instead of heading NNE from there, the party went directly north across the Fruschnitzkees to the south ridge, and along this ridge to the summit. They descended via the Romariswandsattel, as described above. From the Oberwalderhütte, the best way to the summit is via the NW ridge. To get there, skirt the southern slopes of the Johannisberg, avoiding crevasses, over the Schneewinkelkees glacier to the Schneewinkelscharte. Getting on the NW ridge at the Schneewinkelscharte
From there it's a nice scramble (UIAA II), very exposed, over the NW summit and down again, and finally to the main summit. There are a few anchors in place along the route, and a short fixed rope. However, when I climbed there in August 2011 I wasn't too impressed with the look of that rope.
It probably will hold a fall, but I would rather not try to find out. A short steel cable would be an improvement.

The easiest way to get from the Oberwalderhütte to the Stüdlhütte combines these two routes: ascend over the NW ridge, descend along the normal route over the Fruschnitzkees. This makes for a great day tour, taking about 7 hours. In fact, if the weather isn't good enough to follow this route, there is no real alternative route.
(If the weather is bad and you still want to get from the Oberwalderhütte to the Stüdlhütte without delay, you'll have to go down to the Franz-Josefshöhe, drive all the way around the mountains to the Lucknerhaus and walk up to the Stüdlhütte from there. And if there is more than a little bit of snow, the road from Franz-Josefshöhe may in fact be closed.)

In spring, when the crevasses are still mostly full of snow, a better alternative from the Oberwalderhütte may be to go over the heavily crevassed Teufelskampkees glacier, east of the Teufelskamp, to the Romariswandsattel. However, if there isn't too much snow, the NW-ridge is safer.

There are two seasons: In summer, hikers and climbers roam the area, while during spring time it's skiers and ski mountaineers.
The huts open sometime in spring and close by the end of summer or early fall. When the huts are closed, there is still the winter room, but of course you'll have to bring your own supplies.

The mountain lies within the boundaries of the Hohe Tauern National Park. Access is free, but the usual conditions apply: don't take anything but pictures, leave nothing but footprints. Camping is not allowed, but if you put up a tent somewhere high and pack it up the next day, it's usually condoned. Stüdlhütte
The two nearest mountain huts are the Oberwalderhütte and the Stüdlhütte. During the summer season, both these huts are very nice. Outside the season, both have a winter room.
If the Hofmannshütte (2444m) (47.0859,12.7380) is reopened again, it could make quite a convenient place to stay as well, especially in spring in combination with an ascent or descent over the Teufelskampkees. Glocknerhaus
Slightly further away, there are several places to stay on or near Franz-Josefshöhe (47.075,12.751). Before going to the Oberwalderhütte, we stayed at the Glocknerhaus (2132m) (47.0697,12.7683), which was originally built as a mountain hut, and it still is, but it has evolved over time to include an excellent restaurant as well.

In the surrounding valleys, there are also lots of accommodation options. The main nearby villages are Kals and Heiligenblut. View over the northern Glockner Group from near the Schneewinkelscharte