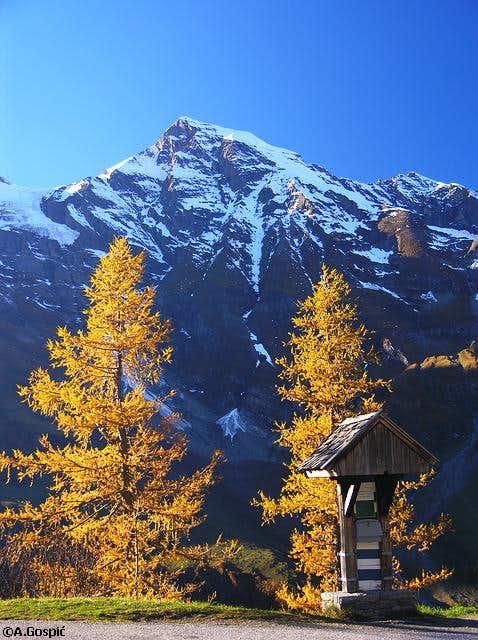 Grosses Wiesbachhorn is an impressive mountain. Its proportions are perfect, and none of the surrounding peaks rivals it in height. Alpine authors End and Peterka describe it as the "rival of the Grossglockner" in their guidebook about Glockner- and Granatspitz group. The southeast face falls off 2418 meters - the biggest difference in height between summit and valley in the eastern Alps! It has been mistaken for the highest mountain in the Hohe Tauern for a long time in mountaineering history.

The first climb was done by two farmers from Fusch named Zanker and Zorner in the 18th century via the southeast-route. First winter climb by Th. Oberwalder via the southwest face on march 2, 1906. 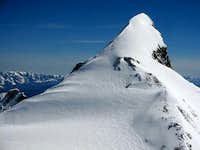 a winter's view of Kaindlgrat

The mountain is very popular among alpinists and especially suitable for beginners because it is rather easy to climb on the normal route called "Kaindlgrat" (UIAA grade I, 35-degree steep ice/snow - if there is any ice left). Being #2 in Glockner Group it is a "big one" though. If fitness and conditions allow I recommend climbing the Hintere Bratschenkopf in addition.

In older maps, the height is reported with 3570m. 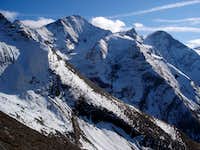 Mountaineering history was written in the Northwest face of the Wiesbachhorn during its first climb on July 15th 1924: climbing together with Willo Welzenbach, the leading Fritz Rigele used ice screws for the first time ever (not actually screws, but roughly 20 cm long ice-nails). They were in fact not used for belaying, but for moving forward. Unfortunately this is real history now: the famous ice face has completely melted away in recent years and can only be climbed in spring if snow conditions are good.

A picture of the route on can be seen here

link: description in German at www.bergsteigen.at

Toni Schmid, leader of the first ascent party of Matterhorn North face fell to his death here in the early thirties of the last century. Miracoulosly his climbing partner Ernst Krebs survived the immense fall. He recovered and later won a gold medal in wildwater canoeing on the 1936 olympics.

By train:
The nearest train station is Zell am See. From there, take the Bus to Kaprun and then on to the Kesselfall-Alpenhaus (1033 m).
Federal Austrian Railway: timetable query [german]

By car:
From Germany (Munich area) take the Autobahn A8 (Munich - Salzburg), exit at Traunstein/Siegsdorf and continue via Inzell, Schneizlreuth, Steinpass, Lofer, Saalfelden and Zell am See to Kaprun.

You can also exit the Inntalautobahn at Kufstein-Süd and continue via Ellmau, St. Johann, Kitzbühel, Pass Thurn, Mittersill and Niedernsill to Kaprun.

From Kaprun, the road leads up into the Kapruner Valley to the Kesselfall-Alpenhaus. Leave your car on the public parking lot, which is to your right at the point from where private cars are not allowed on the road anymore.

At this point, you're almost there:

From the Kesselfall-Alpenhaus, take the bus to the Restaurant "Heidnische Kirche" (2040 m). There are actually two busses interrupted by an elevator. These buses run only in the summer season from mid-May to mid-October. Details on www.tauerntouristik.at. The fee is € 16,00. The reservoirs of the hydroelectric power company are a big tourist attraction.

The restaurant at the reservoir is where the walk to the Heinrich-Schwaiger-Haus begins.

The only nearby hut is the Heinrich-Schwaiger-Haus (2802 m). After a 3-year overall renovation the Heinrich-Schwaiger-haus has opened again on June 27th 2012. It has room to sleep for 57 guests. It is open to the public from end of June to end of September. A warden is present. WC, separate ladies/gentleman bathrooms with cold water.

Outside that time, an always-open winter-room with room to sleep for 6 persons is available in front of the hut; it offers a gas-heater, a wood-heater and a gas-cooker. According to Ivonas trip report the cooker did not work in October 2008, so you should not rely on it.

Especially during high season, from mid-July through September, making a reservation at the Heinrich-Schwaiger-Haus, the base for an ascent on the normal route, is more than just a good idea (this means it is mandatory if you can't live with having to sleep outside or in the winter room and are not a member of the German Alpine Association DAV).

here you can find an article in the magazine of the german alpine club (DAV-Panorama 3/2002, of course in German language) about the Heinrich-Schwaiger-Haus and its history and mountains

If you want to climb the mountain outside the opening season of the hut, another option is at Heidnische Kirche restaurant at Mooserboden reservoir lake. Ivona found there in October 2008 a very comfortable winter room with hot water, electricity, gas cooker and a nice bathroom.

If you want to climb Wiesbachhorn via the firn ridge of Kaindlgrat, it is advisable not to go too late in the summer season because if snow has melted the route loses much of its attractiveness. So a good time is shortly after the opening of the hut mid-June to mid-July - and perhaps again in September if there is fresh snow 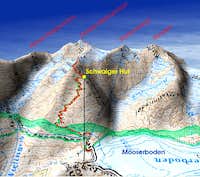 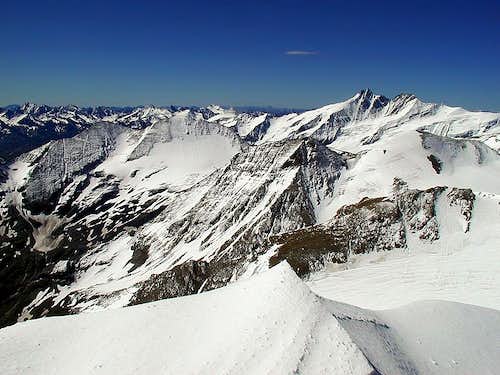