But besides the mountain Grossglockner itself there are many other attractions for tourists, hikers and climbers in his area:

History of alpinism in the eastern alps started mainly at Grossglockner and its group.
In order to avoid double info I will concentrate here on Information that is not already on the Grossglockner page.

The Group lies between the Granatspitz Group west, the Goldberg Group east and the Schober Group south. To the north the Salzach valley separates it from the Kitzbühel Alps and the Salzburg slate Alps.
In politic manner the Group is part of the Austrian states (“Bundeslaender) of Salzburg (full north side), Tyrol (south west side) and Carinthia (south east side). The three states do not meet at Grossglockner (because Glockner ridge spreads into the south side) but at Eiskoegele (3438 m)

„Official“ boundaries are:
- the river Salzach
- the valley of Rauris and the Seidlwinkltal to the Hochtor (highpoint of the pay road)
- the Tauernbach creek to Heiligenblut, the River Möll,
- the Leiterbach creek and the Moosbach creek to the Peischlachtoerl pass
- the Peischlachbach creek to Kals, the Kalser Bach river, the Dorfertal valley, Kalser Tauern pass
- the Stubachtal valley 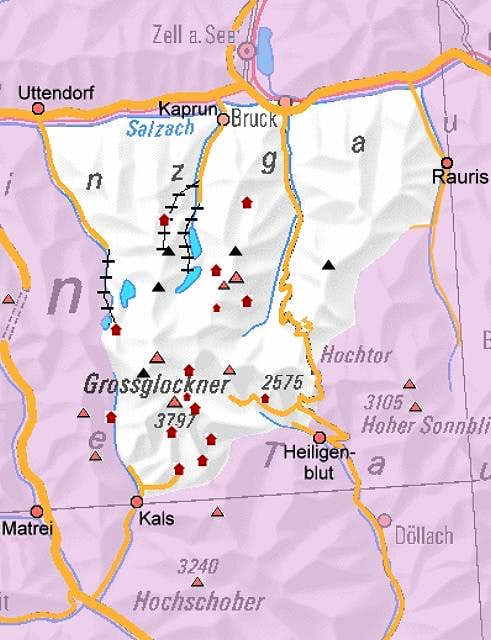