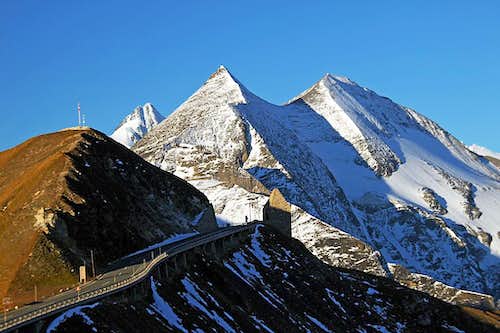 Fuscherkarkopf rises in the central group of Hohe Tauern and is not one of the most important mountains. But it offers various mountaineering possibilities and an excellent view over Pasterze glacier on Grossglockner (here is an example). In summer it is quite often ascended because of Grossglockner panorama. Its northern face was once popular, offering an ice tour for beginners, but in the last years not much ice is left there. In spring, when conditions are good, adventurous skiers can still do the north slope.

The first ascent was done by Georg Maier of Fusch , before 1865. The mountain is named by the Fuschertal (valley), lying north-east below the summit. Through this valley a strong stream of tourists runs, they are of course travelling by the famous Grossglockner panoramic road over Hochtor, 2575 m, taking pictures of high glacial mountains. Seen from there, Fuscherkarkopf together with its neighbour Sinwelleck, 3261 m, makes a famous pair, showing its up to 50 degrees steep northern face. From all other sides Fuscherkarkopf is not so picturesque. It is actually the highest point of the part of main Hohe Tauern ridge, going from Pasterze glacier to Hochtor in a W-E direction. The mountain sends a distinctive ridge towards the NW, which is in summer used for ascent, and from its main summit and the NW fore-summit two side ridges go towards the south, finishing on the lowest part of Pasterze.

And finally, as already two of our members suggested to mention: 'German speaking alpinists often call the mountain Fuscher Kar Kopf with the short cut "FKK", what is normally used in German for "Freikoerperkultur" = nudism. This joke has granted the mountain additional popularity... '

From the summit of Fuscherkarkopf (and also already from the routes on it) most impressive is of course the view on Grossglockner's north face and the huge Pasterze glacier flowing beneath it. You can see every detail of those ridges, couloirs and glaciated flanks. More towards the NW there is the upper glaciated plateau of Pasterze and several summits rising out of it. Towards the N and NE Mittere and Grosse Baerenkopf are closing passages towards the glacial world of the second giant of Grossglockner Group - Grosses Wiesbachhorn. Its sharp peak can be nicely seen, rising towards the sky. Finally, the eastern and southern horizon are boiling of more distant peaks of the neighbouring groups - Goldberg group and Hochschober Group, namely.

The vast majority of visitors come to Fuscherkarkopf from the south. From the road over Hochtor (Zell am See - Heiligenblut) the Grossglockner panorama road goes also up to Pasterze glacier. It finishes on a big parking place on altitude of cca 2370 m, at Franz-Josefs Haus. 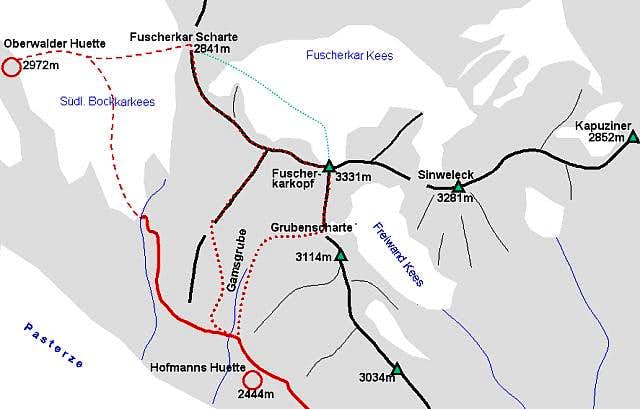 1. In summer, one of the normal ascents goes over the NW ridge (up to II. degree UIAA). From the parking place we go by the broad Gamsgrubenweg (promenade path in summer) towards the north-west. Passing the Hofmanns Huette we turn a bit more nortwards and ascend on the Southern Bockkarkees (glacier) in the direction towards Oberwalder Huette. Instead of turning left to the hut, we go right (eastwards) on the Fuscherkarscharte, 2835 m. Here the NW ridge begins - it leads us over the fore summit directly to the main summit. Exposed, easy climb on the ridge. 4 hours.

2. Southern ridge. From above the Hofmanns Huette there's also the direct option, which once went through Gamsgrube. This is a shallow valley, rich with flowers, and thus protected by law. Now the route goes along the ridge, reaching the Northwest fore-summit (3252 m). On the ridge there are some steep rocks and also a few places are protected by cables. On the fore-summit you meet the #1 route, turn right and reach the main summit ain an easy, but quite exposed climb. The difficulty of this route is approximately the same as #1. 3.5 hours.

3. In spring, when tour skiing, we continue from the Fuscherkarscharte (saddle) further towards the east, then ascending constantly over the northern face until it gets steep (50 degrees). Here we turn up directly and reach the summit. Early in the morning take care also on the Gamsgrubenweg. In winter and spring it is far from being the promenade path. It stays long in shadow, often it is icy and requires crampons and ice axe.

4. An easy climb of UIAA II degree also reaches the top from the east, from the notch between Sinwelleck and Fuscherkarkopf.

The road to Pasterze glacier has to be paid.

Please consider also this very important contribution of Mathias Zehring: The high valley "Gamsgrube" south of the Fuscherkarkopf is by law not allowed to enter without permission of the government of Carinthia. Therefore the routes through the Gamsgrube are illegal. The reason are the very seldom - perhaps unique - plants there in a biotope built of sand caused by rotten rocks (Kalkglimmerschiefer), that can be damaged by footprints.

Avalanches from the N wall

The best summer and autumn months would be July to October. The best months for skiing would be April to May.

Below it is an interesting comparaison how the north face glacier has deteriorated in only 20 years.

For the Fuscherkarkopf you can use many mountain huts along the Grossglockner panoramic road and Pasterze glacier. Also tourist capabilities of Heiligenblut are useful. Thanks to Mathias Zehring all these are excellently described on the excellent Grossglockner page and I will not repeat them here. Most useful huts are:

Because Grossglockner is so close, see all available data (webcams, weather), which are mentioned there (link). Thanks again to Mathias Zehring!