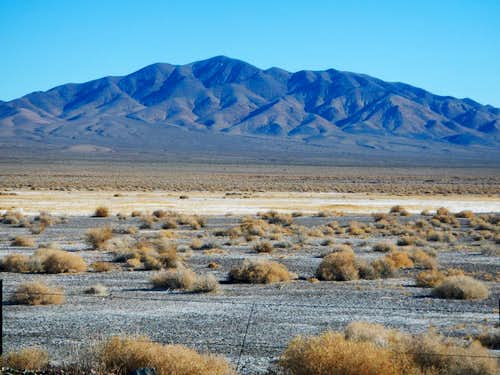 Shadow Mountain is located on the border between California and Nevada, in the northern Mojave Desert.  This peak is not to be confused with the Shadow Mountains of the southwestern Mojave.  It's situated between Telescope Peak to the west and Mount Charleston to the east, however smaller less-frequented desert ranges surround the immediate area. It's nearest neighbor is Eagle Mountain to the southwest.

Shadow Mountain is a highly eroded pile of broken rocks, weathered by countless ages. In fact, it has no sharp defining features whatsoever. All sides display gentle slopes and ridges divided by equally gentle washes. Perhaps this uniformity is what makes the peak attractive. And yet from any road, it's still very far away.  Shadow Mountain has a slight mystique and very few people have stood at the summit.  You will have to explore on foot to gain knowledge of this peak. 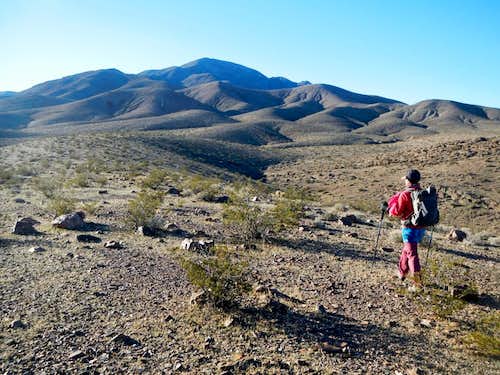 Shadow Mountain is at the northern terminus of the Resting Spring Range which divides the Amargosa River valley to the west from the Pahrump Valley and Chigago Valley to the east. This Resting Spring Mountains were named by early settlers following the Old Spanish Trail. Their wagon trains were headed west for the California Gold Rush, but they would stop at a nearby spring to water and recuperate their animals before the harsh crossing of Death Valley. 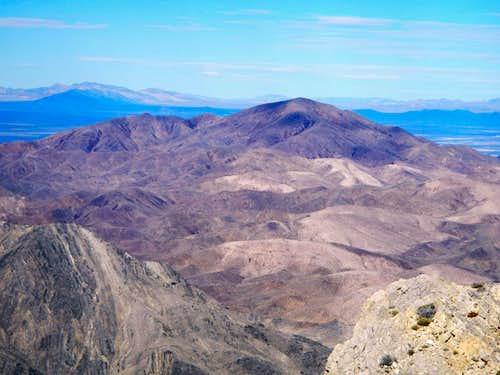 Shadow Mountain is the third highest peak in the range and second most prominent. Previously known as Quartz Mountain, this peak sees less than one ascent per year on average. There are no roads or continuous trails on the peak. The extremely arid nature of this portion of the Mojave fosters sparse vegetation, making cross country travel easy, if not slightly dull. The highest point of the Resting Spring Mountains is Stewart Point. 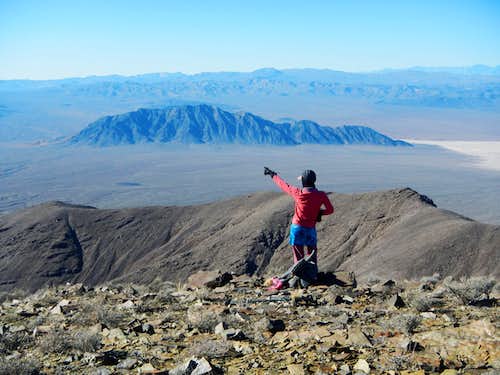 Eagle Mountain Below
In 1994 the entire Resting Spring Range within the California boundary, including Shadow Mountain, a total of 76,312 acres, was turned into a protected wilderness area. Currently the portion of the range which extends into Nevada is part of a wilderness study and could also be protected soon. 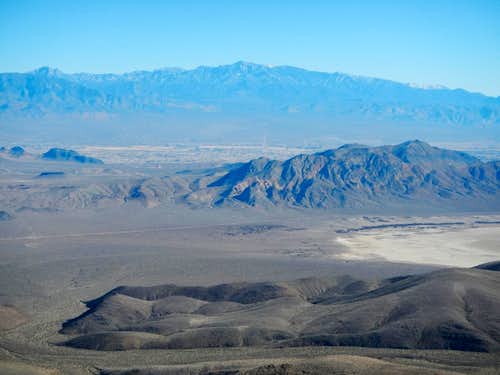 Mount Charleston to the East

There is no exact route for this peak since the terrain is easy and open. You really can't go wrong. Basically park as close as you can to it and then walk across open desert and follow ridges up.  For once, you can make up your own route. 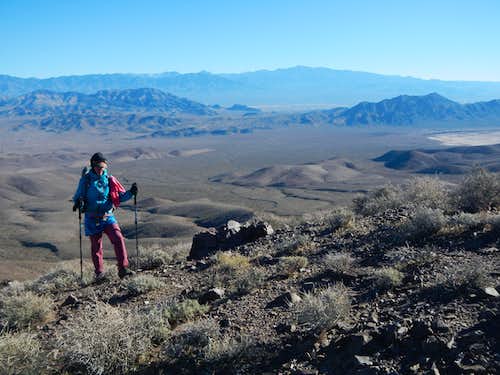 High on Shadow
Having said that, most parties choose to park on Bell Vista Road between the town of Pahrump and Death Valley Junction. This is as close as you can get by car and will make for a 9 mile round-trip hike with 2600 feet of gain. From the highway, aim for the north ridge and then follow that up to the summit. 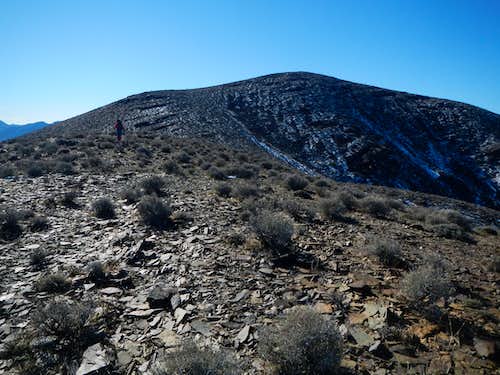 Along The North Ridge

Alternatively you could make a longer approach from the southwest and Eagle Mountain, which should prove equally simple. 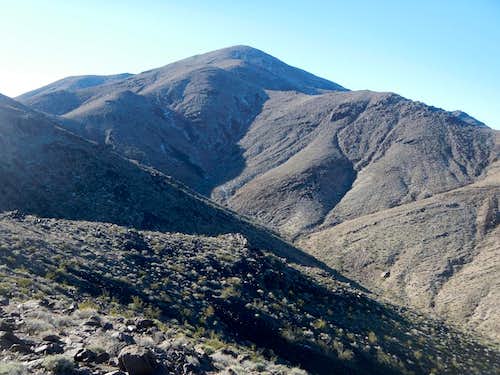