Stevens Peak anchors the far east end of the Tatoosh Range, a mini-range in the south end of Mt. Rain-Here National Park. Stevens is seldom climbed, as it's rather far to get to with a somewhat problematic approach, especially when compared to to the ridiculously easy access of the Castle-Pinnacle Plummer area of the Tatoosh. Even Mssr. Beckey writes "Allow a full day."

Stevens is about 1 mile east of Unicorn, and that offers a decent approach. It's quite possible to get the trifecta of Unicorn, Boundary and Stevens in one day, or Unicorn and Stevens, or just Stevens. Read below for the beta.

From Portland:
Take Interstate 5 to exit 68. Turn east onto US highway 12 and continue for 30 miles to Morton and state highway 7. Take highway 7 North to a junction in the small town of Elbe. Turn right and follow this road through Ashford into Rainier National Park. There are signs for Mt. Rainier National Park at nearly every junction.

From Seattle:
To reach the West entrance by Longmire, take highway 7 from Tacoma 35 miles South to Elbe. At the junction, follow the signs to Mt. Rainier National Park and drive East about 15 miles to the park entrance.

Once inside the park, follow the main road to Longmire and continue East past the turn off to Paradise and onto Steven's Canyon Road. Unicorn Peak is in the Tatoosh Range south of Mt. Rainier. The standard route begins at the Snow Lake trailhead on Stevens Canyon Road. about 3 miles east of Reflection Lakes.

A $15 fee or park pass is required to enter Mt. Rain-Here National Park. Once inside the park, you do not need to pay to climb in the Tatoosh. Camping is regulated, but there are several pay and free sites to choose from in the park.

Camping in Mt. Rainier National Park is regulated by the National Park Service. There are many campgrounds within park boundaries - some pay, some free. There are also limited backcountry camping permits available.

Wilderness Camping:
The most convenient place to camp is at the Snow Lake camp. This campground consists of two primitive campsites located near the outlet on the North end of Snow Lake. These sites share a pit toilet and a bear pole. If the Snow Lake camp is booked, there are a handful of other trailside campgrounds in the area. You can also obtain a permit for backcountry and alpine camping. Permits for all wilderness camping are free and can be obtained at any ranger station during the summer. During the winter, the Longmire Museum is the only place open and they will set you up with a permit. More information on wilderness camping

Car Camping:
Mount Rainier National Park has 6 car-camping areas with a total of 600 sites that are open during the summer months. Sunshine Point campground is the only car-campground open year round. Fees to use these facilities are from $9 to $15 per night. Click here for more information on car camping in the area.

Eric's Basecamp has a nice trip report, maps and photos of a complete Tatoosh Traverse, including Stevens. Check it out:

There are two main ways to get to Stevens. One, if you only want to climb Stevens, is from a traversing hike into the Maple Creek drainage. The other is from the Unicorn Summit.

Via Maple Creek
Start up the normal Unicorn Route. Go past Snow Lake, and ascend several hundred feet through a snow gully (talus in late season). At the top of the gully, check your altimeter. At about elevation 5,600 feet, traverse E about 1/2 mile. Your goal is the bottom of the steep buttress that projects NE from the summit of Unicorn. (You may be tempted to cut up directly from Snow Lake via some rock gullies. While shorter, this gets into some very exposed, poor quality, wet fourth class rock and is highly NOT recommended!)

Once you are at the bottom of the buttress, continue your traverse at a constant elevation for about another quarter-mile. This should get you to a small notch where you can descend a few hundred feet into the Maple Creek drainage. We climbed this in mid July on a typical snow year, and there was plenty of snow in the gully. An ice ax is recommended, as the angle approached 35° near the top. Ascend the Maple Creek drainage to the large flat pass area between Boundary and Stevens peak.

From the Summit of Unicorn
The best bet is Beckey's suggestion. From the summit of Unicorn, go south along the ridge about 100 meters to a small notch. Start heading down left (E) off of the ridge. When you drop about 200 feet, you should come to a bit more of a rock drop off. Move south along the edge of this rock band and look for a lower angle spot that you can easily get through. This should be third class with no rapelling required. If it looks too steep or too run out to easily down climb, you're in the wrong spot - keep looking.
Printing out the gallery photo with the route drawn on it should help significantly, hint hint. See next image for redlined route, click to view full size. (photo credit Charles Reneau) 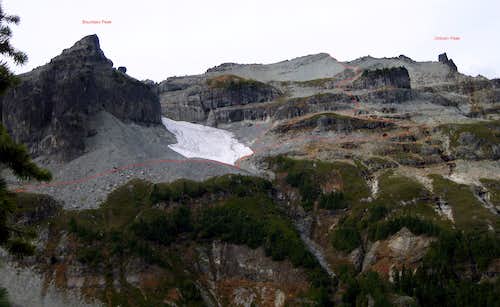 (If you are going for the three peak day of adding Boundary Peak as well, I recommend you retrace your steps to near the Unicorn summit and descend as described in the previous paragraph. While you're backtracking a bit, you will save time and preserve some fragile alpine flora from needless trampling.)

Once you get through this upper rock band, began traversing to the south,
trying to maintain a fairly constant elevation. In earlier to middle season this should be on moderate snow slopes and a bit of scree. This should lead you in about 1 mile to the large flat pass area between Boundary and Stevens peak.

Ascending to the summit from the Boundary/Stevens pass
This is an easy third class stroll, provided you make the right route choice in one key spot. From the flat pass, start heading up towards the Stevens summit. Stay to the right initially and you will avoid a small cliff band. On the lower west facing slope of Stevens is a large area of really lousy rock. You can fourth class up through it, but there is big-time rock fall potential, and it would be sort of tricky to down climb, especially in a group of more than two people. The route we took to get through this was to head straight up to the ridge line to a low point. The skips the entire fourth class action and puts you on the ridge with easy walking to the summit. Time from the pass to the summit, approximately 1 hour. (See attached photo, "X'd" out area is the Zone of Lousy Rock)

Descent
To return to the Snow Lake trailhead, retrace your steps to the broad pass
area. Head north down into the Maple Creek drainage, which is a beautiful long snow gully - great glissading! (From the pass, approach the drainage on the far left (W) side, as there are some short cliffs to the right (E))
Descend about 600 feet to approximately 5,400 feet, and look to your left for a short 200 foot or so ascent through shrubbery that leads to a low pass. Ascend to the pass. At the top of the pass, contour west for about 1/4 mile, trying to maintain a constant elevation. This should bring you to the base of the large buttress that comes off the Unicorn summit block, and to the top of a ridge that overlooks Snow Lake. Head north down this ridge about a quarter-mile.

Look down into your left, and you should see a large forest of slide alder.
This is the downhill epic bushwhack that gets you back to Snow Lake.

Warning: do not try to head straight down to snow lake before you get to the slide alder patch, or you will get cliffed out!

Descend approximately 600 vertical feet through the slide alder, playing Tarzan is you go, until you get to the camping area on the north end of Snow Lake. This is actually a lot more fun than it sounds, as going down through the downward sloping alder branches is vastly easier then going up against them.

Pick up the main trail from the west side of the lake and return about 1 mile to the cars.

One can avoid going up through the nasty rock area entirely by traversing through steep meadows from the Boundary-Stevens saddle. Stay at about the same elevation as the saddle until you make it below the last rock formation and then gradually start to traverse upwards. Don't stay too close to the rock wall as it gets steep -- but just a bit below. On reaching the next ridgeline after the rock formation, turn left and scramble upwards wherever is easiest to the ridge and head from there to the summit.

Looks like your topo coordinates are off and have this peak in the Goat Rocks instead of the Tatoosh.

Brian, you are correct, I don't know where I got those coordinates from 10 years or so ago when I posted this. I just corrected them, and they should draw up properly now. Thank you for suggesting this change.