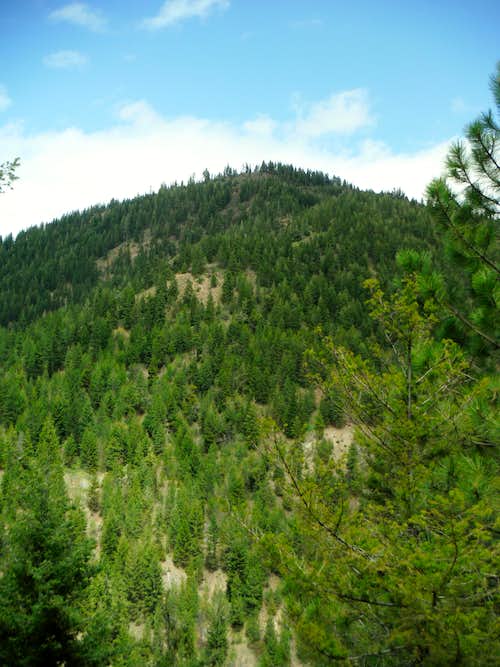 Tiptop as viewed from Forest 7201.

Tiptop, a summit located north of Blewett Pass is most famous for being ranked #94 on the Wenatchee Back Court List. Tiptop has over 1000 feet of prominence and stands out to the north and east of many of the other mountains in the region. Of all the summits, this is one of the few summits that in summer and early fall can be driven to provided you have a steady vehicle with 4 wheel drive and high clearance highly recommend. Just a seven mile drive up Forest Road 7201 roughly 20 miles north of Blewett Pass will take pretty much right to summit. On the summit light a communication tower. Views are decent on the summit especially toward the east to the Wenatchee region. There are though just to the south and west of the true summit excellent views of both the Teanaway Region and the Enchantments. 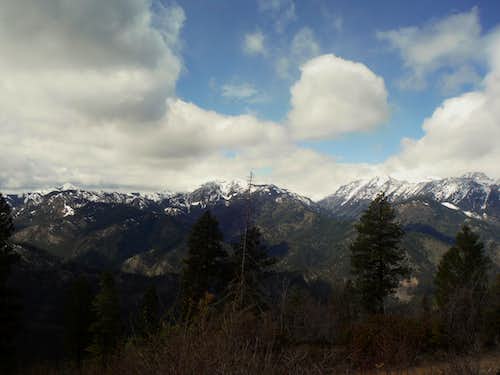 Tiptop as viewed from Forest 7201.

If you are not a fan of driving up a mountain and you want to experience this mountain through hiking and snowshoeing from the road 2 miles (Forest Road 7204) to the south there are two good off-trail hiking and snowshoeing routes to the summit. There is no formal trail but in winter an off-trail snowshoe to the summit of Tiptop will involve a seven mile, 2900 foot elevation gain hike to the summit. In spring this hike can be shortened as the road becomes more drivable due to snowmelt. If possible one can drive all the way to the gap between Windmill Point and Tiptop and taking an abandoned forest road to the base of Tiptop and then bushwhack and climb up (part of the area has a good bootpath) all the way to the higher forest road (Forest Road 7201) and take that all of the way to the summit. This was the way that I took to the summit. 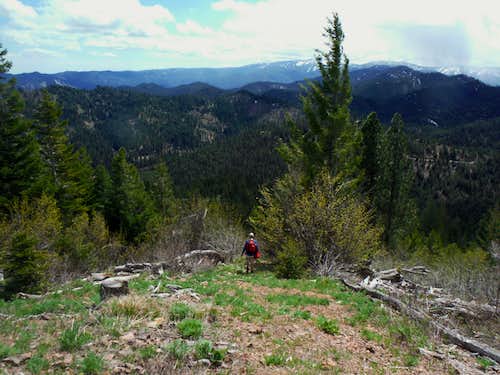 VIA DRIVING TO THE SUMMIT: From 15 miles north of Blewett Pass on Route 97 Take Forest Road 7200 for 1.5 miles. Make a right onto Forest Road 7201. Stay on the road for 7 miles until it reaches the summit. High clearance vehicles recommended. Road only open in summer and fall before the snows come in.

VIA THE WINTER SNOWSHOE ROUTE: From 12 miles north of Blewett Pass on Route 97 head east on to Forest Road 7201. This road to be hard to so look for the short jersey wall marking Ruby Creek. There will be a pull out on the side. Park there and start your climb

VIA THE SPRING HIKING/BUSHWHACK ROUTE: From 12 miles north of Blewett Pass on Route 97 head east on to Forest Road 7201. This road to be hard to so look for the short jersey wall marking Ruby Creek. Go 4.4 miles on the road. You will hit various turnoffs along the way. The hardest one to figure out will be at 3.4 miles where you will run into a Y intersection. Veer to the left and stay on the road until you run into a 5 way intersection on a gap between Windmill Point and Tiptop. From there park your car and take the spring route to the summit.

There is no red tape on this mountain as of right now on all options heading to the summit except that the road will be gated at certain times of the year due to snowfall.

Tiptop is a great summit to climb when bad weather is hit the western crest of the Cascades but not hitting the eastern side as strongly. Often one can be standing on the summit of Tiptop and be staring at bad weather hitting the Teanaway and Enchantment to the east and Mission Ridge to the south and not be affected from it. I had this experience personally when I visited the mountain on 5/3/14.

Fall in spring tend to be the best times to visit this summit. There are please of fall colors on this side of the Cascades due to some of the aspen are here. I did not see any western larches though they are found in this general region of the Cascades. In spring flowers such as balsamroot and indian paintbrush come out making an hike up Tiptop a rewarding one.

Tiptop makes a good winter snowshoe using either Forest Road 7201 (longer) or going off-trail from Forest Road 7204 (steeper). Most prefer to take the steeper Forest Road 7204 route because it is shorter. Tiptop though is not ideal in summer at all. Summers in the eastern Cascades tend to be hot and dry and the forest in the region have been ravaged by serious wildfires in the past couple of years.

Another Trip Report in Spring