Grindstone Mountain, located in the Alpine Lakes Wilderness just north of the Enchantments is a real gem of a mountain to go for. Ranked #20 on the Wenatchee Mountain Backcourt 100 list this mountain is a real treat for anyone who tries this mountain. Depending on the season this mountain can offer a long snowclimb, a great summer scramble or a fall masterpiece of some of the best foliage in the state. When I was up there in late August 2010 it was berry season and the berries were as good as any other mountain in the Cascades. From what I saw I probably would have been better if I had waited just four weeks, because the fall colors here would be mindblowing between the few larches and the berry bushes.

The impressive north face of Grindstone Mountain (7533 feet) as viewed from the vicinity of Ladies Pass, July 22, 2013. Mount Stuart is peaking up behind. 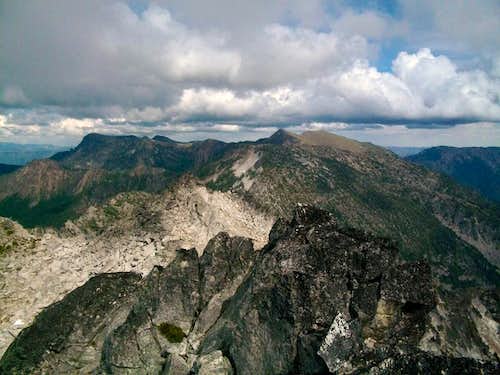 View of Big Lou and Big Jim from the summit of Grindstone
The views from Grindstone are simply breathtaking. The Enchantments lies to the south while to the north lies the Chiwaukum Range, and Ladies Peak and to the east eventually you will see the Washington desert land. To the west lies Eightmile and many other mountains that I will be able to name and will probably be climbing in the future. It was a little cloudy when I was there but I am sure you would be able to see Rainier and one of the northern volcanoes from this viewpoint. 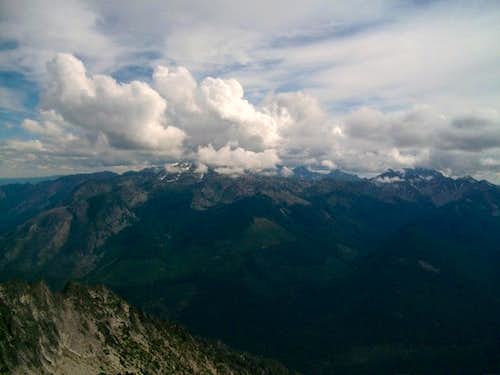 The Enchantments from Grindstone 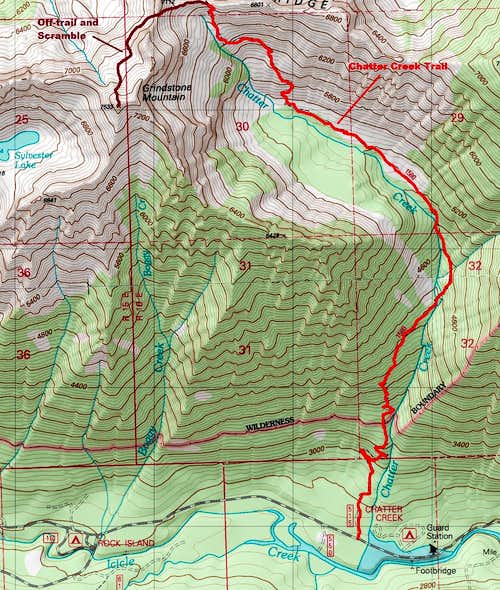 Map of the Route
The prominent summer route is by the Chatter Creek Trailhead. It is the preferred route because the Chatter Creek Trail go up to 6800 feet on Grindstone before going over a pass. The trail as of 2010 is a little brushy but easy to follow. It does have a short catwalk style section but most experienced hikers and climber will do very well here. Once up to the second to last major switchback you want to then head left into the heather and scree field and aim for a boulder which lies between the western and eastern high-point. You should hit the ridge just right of the boulder. 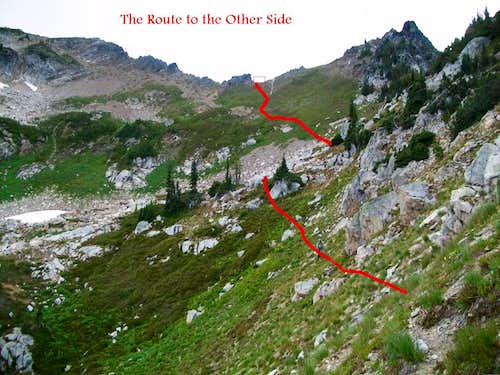 The route up!
Descend 200 feet on the other side and then cut left bypassing a large false summit of Grindstone and crossing a scree field. Once past the scree field look up to what looks like the highest point on your left and start your scramble towards it. If your scramble is beyond low class 3 you are heading to the wrong highpoint. Continue going up the Class 2 to 2+ boulder scramble up a gully to attain the ridge. The final summit will have small cairn and a summit register on it. Total Distance from the trailhead is 10.5 miles. 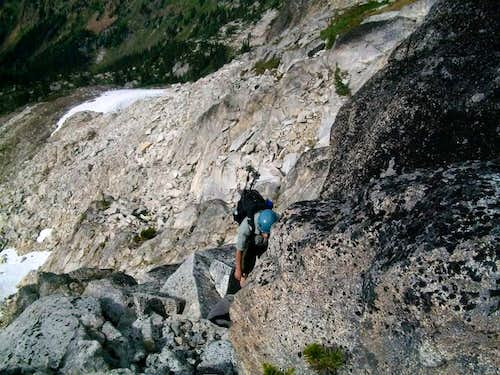 Don on the scramble 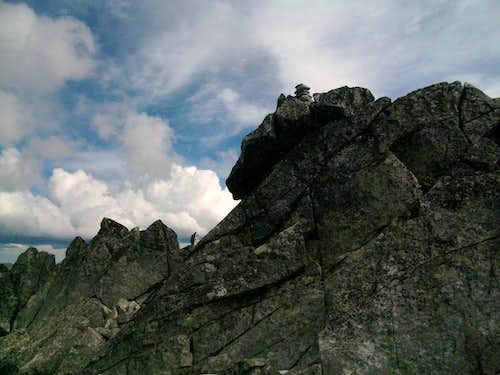 Another trip report via WTA