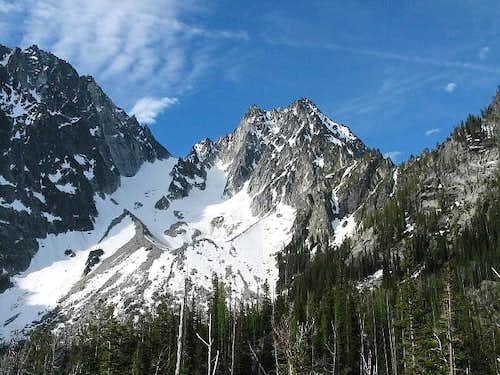 From the NE
Colchuck on the right 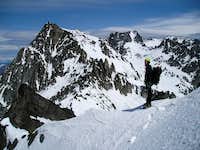 From the SW
Colchuck on the left

Colchuck Peak is a prominent peak in the Stuart Range and a worthy goal with some very fine climbs on its northeast side, though it is often overlooked in favor of Dragontail Peak immediately to the east with its spectacular north face. The easiest routes are scrambles from the south and / or the Colchuck Col at the top of the Colchuck Glacier to the east. There are several high points with the western most being the true summit. 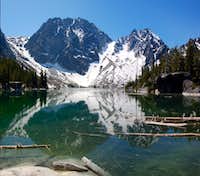 From the south, the peak may be approached via the Ingalls Creek Trail either from its trailhead accessed from US Highway 2, or via Longs Pass - Ingalls Way Trail - accessed from the end of the Teanaway Road south from Cle Elum, WA. This is certainly the long way to the peak - about 11 miles via the Ingalls Creek Trail and up Porcupine Creek or between 7 and 9 miles via Longs Pass and up Porcupine Creek.

Enough to circle the mountain and tie it in a bow. Day use does not normally require a permit, but camping is heavily restricted. The permit process is complicated - visit this link for details: 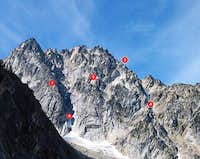 1) East Route (Beckey), scramble. A short scramble from the Colchuck Col which can be attained via talus slopes from the south or via Colchuck Glacier from the north.

This route is commonly called the Colchuck Glacier Route because most parties attain the col from this direction.

2) Northwest Route, scramble. From Mountaineer Creek to the northwest of the mountain one climbs more or less straight up the northwest side of the peak with a detour to the left around the prominent rock band. There may be steep snow early in the season.

3) North Buttress, Grade II, Class 3 & 4 if one climbs west of the crest as suggested by Beckey, but with some very nice easy class 5 climbing directly on the crest. The buttress is attained from the south end of Colchuck Lake via a shallow gully leading to a col or notch low on the peak.

4) North Buttress Couloir, Grade II, snow to 45 degrees, Class 3 & 4 or easy Class 5 upon joining the North Buttress Route. The couloir is entered at the lower end of Colchuck Glacier.

5) Northeast Face, Grade II, Class 5.2. The route is not well defined, but seems to go more or less directly up the face on a series of chimneys and ledges.

6) Northeast Couloir, Grade II or III. This is a very steep couloir beginning about a third of the way up Colchuck Glacier. The entry and the exit can be quite difficult with snow or ice up to 60 degrees. It is recommended as a winter route only.

7) Northeast Buttress, Grade III or IV, Class 5.8. This 18-pitch route requiring about 10 hours from the lake to the summit ascends the prominent northeast buttress near its crest. 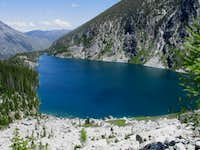 See Red Tape and this link for details: