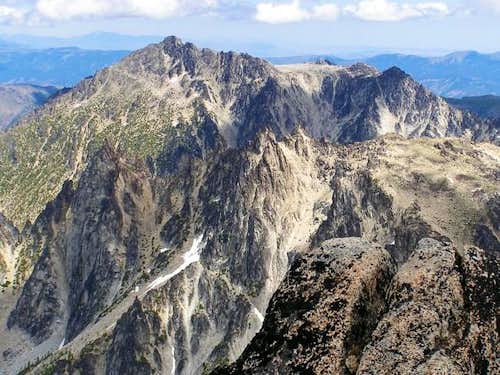 Recent Trip Reports and pics from NWHikers:
August 26, 2007 Report Check out the delicious picture of Coney Lake that is included in this one. 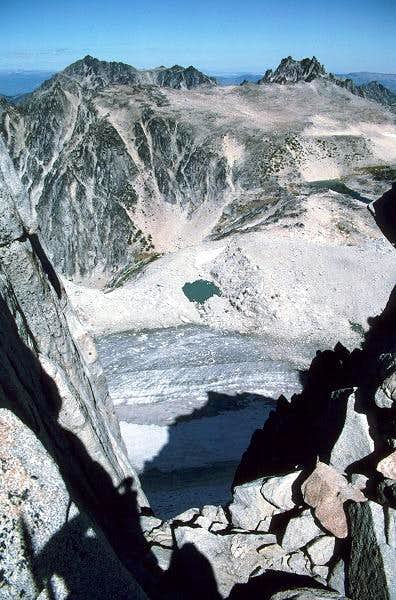 Cannon Mountain is listed in the top 100 Peaks of Washington State as #38 at 8638 feet. It may be the most unknown mountain of this stature in the Enchantment region and probably the most neglected. Jeff Smoot calls it "a big but relatively inconspicuous peak hidden at the western edge of the Lost World Plateau." He goes on to say that "although it is one of the major peaks of the region, rising higher than its cross canyon neighbor, Cashmere Mountain, it is concealed from nearly every lowland vantage." "When you see it from the proper perspective, such as from Icicle ridge or the Lake Caroline trail, it is quite a big mountain and somewhat appealing as a climbing objective"

There are no trails to it and getting to it involves cross country travel. To those who are seeking to climb all of the top 100 Peaks in the state, it is one that they inevitably will find their way to. Aesthetically, it isn't in the same league with Cashmere Mountain across the Mountaineer Creek valley nor the north faces of Colchuck or Dragontail Peaks, but it can be part of some cross country "fun". 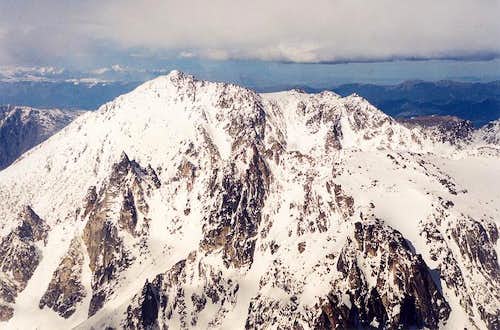 From Seattle there are 2 routes you could take. First, you can get on I-90 and head east over Snoqualmie Pass to Cle Elum, taking the exit to Wenatchee & Blewett Pass via 970 and then US highway 97. Highway 97 takes you over Blewett pass to a junction with U.S. 2. Turn left towards Leavenworth. Go through Leavenworth (you pass the Leavenworth ranger station on this road) until you come to the last road before you start to enter Tumwater canyon and turn left on Icicle road, going four miles until you pass the Snow Creek Trailhead parking area on the left.

Continue on past this parking area until you come to a turn off for Bridge Creek campground (left turn only) and FS road #7601, crossing a bridge over the Icicle River and continue onward almost 4 miles until the road ends at the Stuart Lake / Colchuck trailhead parking area. Northwest Forest Service pass required.

The second way to get to the same Icicle Creek TH from Seattle or Everett area is to take US 2 over Steven's Pass to Leavenworth. When you come out of the canyon, turn right on the Icicle Creek road and drive as before.

First, you need a NW Forests pass to park at the trailhead. You can purchase one at the Ranger station in Leavenworth or at either one of the sporting goods stores. It is $5 a day or $30 per year. The Enchantment core area is a whole different kind of problem as you need a special permit to camp overnight in the Enchantment core area. Also, be certain to make sure your car doesn't appear to have anything valuable visible as break-ins have occurred at this trailhead. Day permits are available at the Stuart Lake TH if you don't plan to camp out and these permits are free.

For much of the needed information, click on Leavenworth Ranger station above (underlined) Now, having shared that, take the time to check out the following:
Here is an excellent website story by Sarah Boomer that gives some background to the permit system that is in effect in the Enchantments and is a fun read as well. Her explanation of the permit system, done lottery style, is as good a description as you can get. 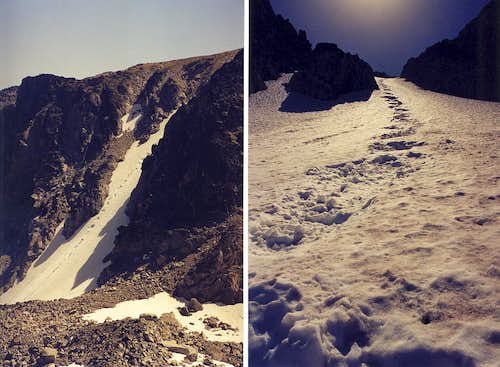 Generally the earliest would be late May (avalanche danger in high snow years) but normally by late June through late October (depending of course on the weather) all the routes into the Cannon Mtn area are feasible. The North Couloir variation route that is off of Northwest ridge route, gives the possibility of an early-season hike/climb depending on if any avalanche danger is present.


Jeff Howbert's excellent resource of the Back Court 100
Cannon Mtn. comes in at number 4 on this list. Check it out (has a couple of trip reports on Cannon that you can access)

Car camping at Eight mile campground on the way up the Icicle Creek road as well as Bridge Creek campground located on the turnoff on FS road 7601, just prior to crossing the bridge.. You can camp at Coney Lake, Shields Lake and other places in the Enchantment area and campsites are plentiful near Shields Lake (as are the mosquitoes. Enchantment permits required of course to camp in the area (see red tape). I have slept in my vehicle at the Trailhead on more than one occasion although I have seen people stealth camp at the Trailhead as well. One thing worth mentioning is that above 5000 feet, in the Enchantment region, campfires are strictly prohibited. 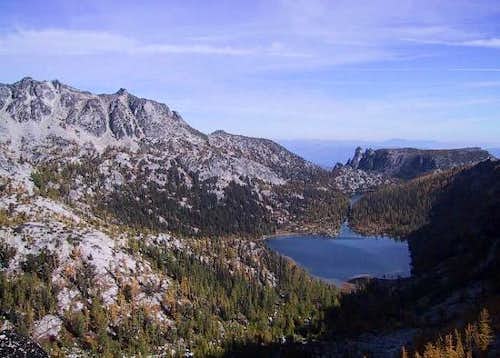 No actual trail goes to Cannon Mtn. but two trails that do exist can put you at Prussik Pass and Shield's Lake. Both of these trails are very well described at the Prusik Pass route at the left of this page (under routes)

Cannon Mountain is different from most of the mountains and peaks in the Enchantment area because it is one that really doesn't exist on a trail system. It is a cross country scramble that can be approached from several different routes.

Climbing Cannon mtn. itself poses no technical problems, getting to Cannon is what requires the most effort. Cannon can be approached from the normal Enchantment area by going cross country from near the southern end of Shields Lake by climbing up towards the west. No technical difficulty and I'd rate this as class 2. (see map) My first climb of Cannon was via this route. The area prior to the summit is called the Druid plateau and is one of the more interesting areas to explore in this area. At one point, there is a nice overlook of Coney Lake, a small lake that some summers doesn't see the snowmelt off of it as it is shielded from the sun much of the day. Another approach is to approach via cross country travel to Coney Lake. I camped at Coney Lake one night and found it to be one of the loneliest places in the Enchantment region. An old fire ring was present but it looked like the lake hadn't seen anyone for at least a couple of years. From Coney Lake, you ascend a gully on the SW part of the lake, and depending on the time of the season, this gully can contain snow. This route brings you onto the Druid plateau, east of the summit of Cannon Mtn.

For additional photos and information on the Enchantment area, see my McClellan Peak page

An interesting article on the Enchantments and how some of the area got named, click here.
If you have information about this mountain or photographs that could be added, I would appreciate your participation. Please add it in this section.

I have been adding additional stories and information at Trip Reports at my McClellan Peak page (also an Enchantment area peak) and if you'll click on the following Trip Report you will be taken there.

In the November issue of Rock and Ice magazine (#119), just inside the back cover was a picture of Prusik Peak. Some route descriptions were included but most stunning was the picture of Prusik. In the recent issue, January's #121), a reader wrote in to voice objection to the fact that the magazine had focused on the Enchantment area (meaning Prusik in this case) and was concerned about the fact that not enough was said about the permit system and the heavy impact that this area is subject to. Overuse was the concern, too many people. Here's my 2 cents on that. The majority of people now coming into this area (wasn't always this way) understand the LNT ethic. You have to earn your way up to the Enchantments, you pay for it one upward step at a time. You are entitled but do be legal and get the required permit(s) and follow the rules of this fragile high country. It is there for all of us to enjoy so we need to take proper care of it. Here is a pic I took of Prussik that is from the same spot as the Rock and Ice photo.

Here is a letter from Rock and Ice Magazine that you might find interesting:

Crowds in the Cascades
"While few would deny Prusik Peak (Famous Faces, No. 119) as the quintessential alpine objective, particularly given the outstanding photo by Cliff Leight, the last thing the Alpine Lakes Wilderness Area needs is even more attention and use -- legal or otherwise. It was regretful that the article did not do more to emphasize the absolute necessity for permits before entering this area, even for a day hike. It, along with many other Cascade gems, is heavily impacted by the hordes of Seattle and the surrounding megalopolis stretching, by the way, from Bellingham almost to Portland.Overuse is the same old problem that no one seems courageous enough to address effectively -- too many people. Gotta have those votes, or subscribers, or customers or whatever. "
Mike Endres / Fairbanks AK

This page was organically created by SP member Dean. All the current content is his creation, but future updates and changes will be done by me. Thanks Dean for all your hard work on Summitpost!