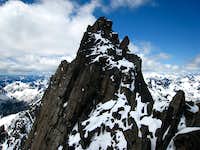 Argonaut Peak is a large bastion of clean granite in the Stuart Range located inside of the Alpine Lakes Wilderness, ranked #65 on Washington Top 100 (#66 on Bulgar List), ranked #20 on Washington's Steepest, and has 733 feet of prominence.

This peak offers many moderate climbing choices in both the spring and summer. Argonaut often gets overlooked by its slightly larger neighbors to the northeast, Dragontail and Colchuck, and the largest peak in the range, Mount Stuart. The advantage of this is no crowds and a real wilderness experience for the few climbers that attempt it every year.

The moderate rock routes on Argonaut have been well documented in the Cascade Alpine Guide. However, it is winter and spring climbing that I feel Argonaut holds its greatest potential. It seems climbing Argonaut early season offers some good potential for first ascents.

The first ascent of Argonaut Peak was in September of 1955 by Lex Maxwell, Bob McCall, and Bill Prater.

Argonaut Peak has three separate summits. The southeast spire is the lowest of the three but is the most technical. The central spire is slightly shorter than the main summit. The west spire, the main summit, is the tallest of the three and features a large block tipped on its side with a small cave between them. The west spire requires a short section of nonexposed class 4 climbing to reach its highest point, after the third class ridge traversing to get to it.

South Route - A loose rock class 3 gully reported to be very unpleasant. Tops out on the ridgeline between the central and main summits.

Direct West Ridge - A variation that climbs the steep rock on the edge of the south face. Class 5.6.

North Face - A moderately long but complex series of steps, gullies, and ramps ascending the face near the central buttress on the north face. 4th Class

Northeast Buttress - A long rock climb that features mostly scrambling on the lower section that finishes on a steep dihedral offering four pitches of good climbing with optional aid. II 5.8 A1

East Gully - A prominent 45 to 50-degree snow gully accessed from the basin just southeast of the ridgeline connecting Colchuck and Argonaut. A single dihedral pitch offers access to the summit ridge. Best in early season. II 5.6

Southeast Ridge - This route is reported to be very good, topping out on the southeast spire. 8 pitches of solid rock including two single, or 1 double rope rappel into the notch. II 5.6

The approach depends on what side of the peak you are climbing.

For northern routes, the preferred method is via the Stuart Lake Trailhead through Leavenworth. Access to the slopes is gained via the east fork of Mountaineer Creek.

You can either approach in via Beverly Creek or Ingalls Pass. From Beverly Creek it is 15 miles round trip with 7,400 feet of elevation gain. Ingalls Creek is 15.25 miles with 7,500' elevation gain making it barely the harder alternative. Hike 2.5 miles up Beverly Creek to a pass. Hike down the left side of Fourth Creek. At the valley floor cross Ingalls creek. Most of the year the creek is flowing swiftly, walk upstream (left) to find a log crossing which should only be about 300 or so feet of walking. 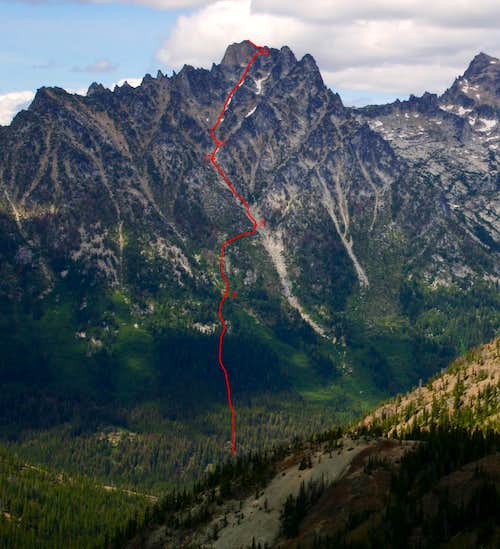 Start ascending the south slope of Argonaut after going about 100 feet or so east to find a game trail. The game trail may be difficult to find but is not too bad without it. Cross under a rib at around 5,800 feet and arrive in the main gully at about 6,000 feet. Ascend the gully until nearly reaching the summit. Scramble right to attain the crux gully. It's a bit stiff for a class 4 section, so some may want a rope. Head to the right at the overhang to prevent having to do class 5 moves, you should see a hidden foot hold on the right side of the mini rib. After the crux you arrive onto the east ridge and scramble your way to the summit. Pass left or under a large rock followed by a class 3 scramble to reach the summit.

Colchuck and Dragontail from the summit

Descend the same way you came up. There is a rappel sling for the short class 4 section. 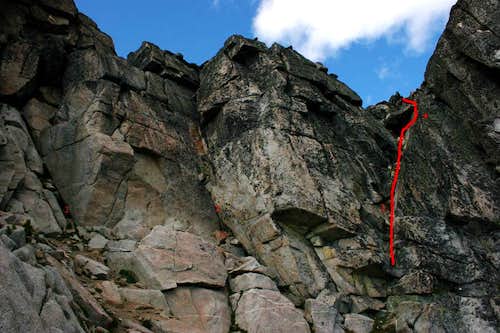 Class 4 Crux on the South Route

While this peak is typically climbed in a day, there are a few places for camping. On the south side you do not need a permit and can camp along Ingalls creek. The north side of the mountain however is in a section called "The Enchantments" where they require somewhat difficult to get permits and are limited due to the area being very popular. More information about this can be found on the forest service website: http://www.fs.usda.gov/detail/okawen/passes-permits/recreation/?cid=fsbdev3_053607

Finding a camping spot in the Enchantments becomes difficult in the fall due to the golden larches luring folks from all around. Winning a permit in the lottery becomes harder and costs money.

All year-round. Dry rock climbing is best from July through October. Mixed alpine climbing is good from January through June.

For current weather information on Argonaut Peak check in with the Noaa Forecast.

Check in with the forest service website for more information on the current road conditions (see road "9737 North Fork Teanaway").

Here is a list of pretty much everything that you will want/need for this climb. Keep in mind, this list only applies to the standard route. Any other route will most likely require more gear and technical training.

Mandatory Gear for the Climb:

I traversed from Sherpa on 7/9/14, and it is indeed long, with non-trivial route-finding; most of it is also not especially fun. You can often trade off between 4th or low 5th-class climbing along the crest and krummholtz-whacking to the south, though I think you're forced to do at least a bit of both. On the good side, the east sides of most towers are easier than the west, so you probably won't cliff out by staying close to the crest.