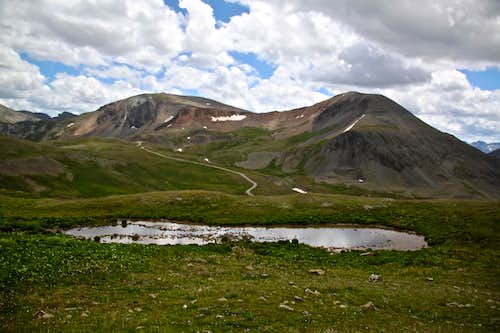 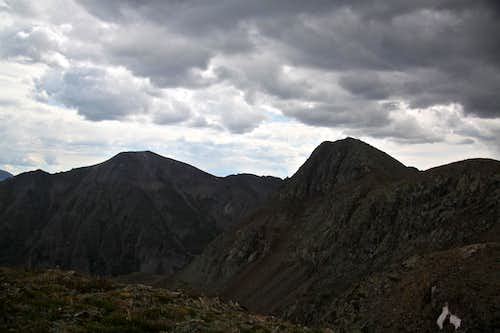 UN 13535 on the right and Handies Peak on the left
Unnamed 13535 is a fun summit located on the south side of Cinnamon Pass, deep within San Juan Mountain range. It does not make it into bicentennial peaks (= highest 200 in Colorado), but it is easily accessible during the summer months. It combines really well with Cinnamon Mountain A.
Cinnamon Pass is a high mountain pass, accessible by high clearance 4WD vehicles. Elevation: 12,620 feet
The saddle above Cinnamon Pass (between Cinnamon Mountain A and Unnamed 13535) is at 13,020 feet elevation.

Guide to the Colorado Mountains with Robert Ormes again does not provide much information: "Cinnamon Mountain (13,328') and its higher neighbor, Peak 13,535' a mile southeast, are easy hikes from Cinnamon Pass. To loop Animas Forks, travel south off Peak 13,535" to the trail in Grouse Gulch, and follow it west 2 miles to the road".
Colorado Rank: 232
Parent Lineage: Line Parent: American Peak
Proximate Parent: Jones Mountain
Class: 2
Nearby Mountains: 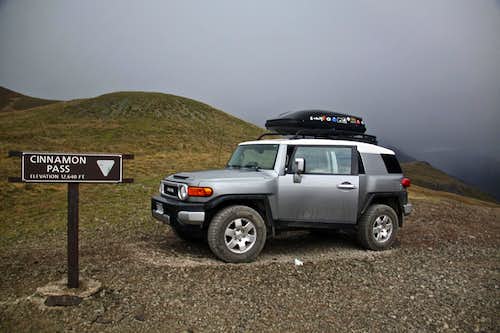 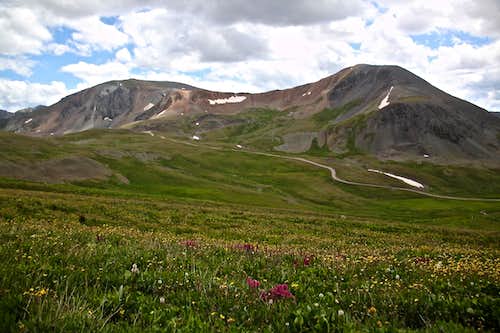 Cinnamon Mnt. and UN 13535 from north side of Cinnamon Pass
Cinnamon Pass Trail Little History: The Utes used this pass road before white exploration of the area. Then, in the early 1860s, Charles Baker used the pass on his journey into the San Juan Mountain when he reported finding gold, triggering a minor gold rush. In 1873, The Hayden Survey Party crossed the pass. In 1877, Enos Hotchkiss constructed the first wagon road over the pass. It was an important freight road for a period but was not maintained after the ore in the area declined.
Description: Today Cinnamon Pass Trail is a seasonal, moderately difficult 4WD road. It is a part of the very popular Alpine Loop. The other half of the loop is Engineer Pass Trail. You can access Cinnamon Pass Road either from Lake City, or from Silverton. You can also access it from Ouray over Engineer Pass, but it does take longer than driving Million Dollar Highway over Red Mountain Pass to Silverton. The scenery varies from the rugged alpine environment and barren talus slopes  near the summit to the wild flower covered valleys and rushing streams. You will pass by Animas Forks ghost town. At either end of the route are wonderful historic town.
From Silverton: Drive through Silverton in its main street northeast out of town. Bear rich onto Colorado 110. Pass a campground on your right, and Hillside cemetery on your left. Continue on paved road until it changes into a good dirt road. The route follows the Animas River and it passes through numerous mines. At 4.2 miles drive across the bridge spanning Cunnigham Creek. At 7.8 mile point is the town site of Eureka, this is where the road closes in the winter. There is a campground in Eureka and a cabin (available for hire and popular with ice climbers in the winter).
Pass Sunnyside Mill on your right and follow the more narrow road up and above Animas River. About 4 miles from Eureka is a public restroom on your left and right above it the road is signed for Cinnamon Pass. (To the right would be the ghost town of Animas Forks). The road here becomes steeper and bumpy. 4WD and high clearance is needed at this point. Engineer Pass Rd. will continue straight and you will take a sharp turn right and uphill, well signed for Cinnamon Pass. The roughest section of the road is just above Animas Forks for about 1/2 mile. It is roughly 2 more miles from Animas Forks to the top of Cinnamon Pass. The road winds along the southern slopes of "Animas Forks Mountain". If you don't have 4WD, you can just park close to Animas Forks ghost town and hike up.
From Lake City: Dive on Colorado 149 and follow signs for Alpine Loop past San Cristobal Lake. At 14 miles pass the intersection County 35 to Sherman townsite (up to here snowplowed in the winter). Continue on main road towards Cinnamon Pass. At 18 miles pass Grizzly Gulch - a popular TH for three 14ers: Sunshine, Redcloud and Handies. At 21 miles there is a turn off for American Basin. It is another 2.2 miles from here to the summit of Cinnamon Pass.

As any mountain there are many ways to get up it.
The easiest approach is from Cinnamon Pass, elevation 12,620 feet. Hike up the trail on the south side of the pass, not marked, but easily identified towards the saddle between Cinnamon Mountain and Unnamed 13,535. The saddle is at 13,020 feet. Turn east at the saddle and ascend mostly grassy slopes towards the sub peak of Unnamed 13,535. From the sub peak you can admire great views of fourteener Handies Peak. Continue easy walking along the ridge, which turn south and then again east to the actual summit of Unnamed 13,535. There is a small cairn with a glass register.
Another approach would be via Grouse Gulch from the road towards ghost town of Animas Forks. There is a packed trail leading along a creek to an unnamed lake and from here you can ascend southeast ridge of UN 13,535.
Remember, you will be spending a lot of time hiking above the tree line. Watch for the weather.

Driving scenic Alpine Loop is free. There are enough parking places at the summit of Cinnamon Pass and a sign. Expect a lot of traffic of different off road vehicles during the peak summer months. Hiking is free.

Summer is the easiest since you can drive to the top of Cinnamon Pass. Autumn, winter and spring provide a more difficult access, and you have to travel through avalanche prone terrain. Check avalanche conditions prior venturing out there in the winter - Northern San Juan Avalanche Information Center.

Primitive camping is available along the Cinnamon Road at various turn offs. You can sleep at the top of the pass - flat parking makes sleeping in a car comfortable. There is a small unnamed lake just north of the pass (? 100 feet) you could easily pitch a tent over there and watch a sunrise over Handies.
Developed campgrounds are closer to towns - Eureka Campground on Silverton site.