This page was transferred to me by SP user Miztflip who is credited for some of the text and formatting here. I would like to send a Thank You for transferring this page to me. 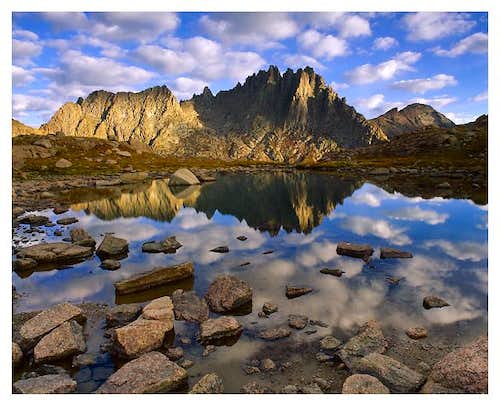 Jagged Mountain lies in the heart of Colorado's remote Weminuche Wilderness Area of the San Juans. It is the 94th highest peak in Colorado and provides one of the most difficult standard routes on a large peak. Jagged is not easily viewed by anyone other than those willing to get off the road and start hiking. The true summit was not reached until August, 1933 by an SJM group led by Dwight Lavender. This party climbed from the Sunlight Creek Drainage to the south of the peak and found their way to the summit. It was not until a year later, that another party found upon their descent, that the North Face provided a much more logical route to the summit. It is this route today that provides the only reasonable access to Jagged's summit.

The standard North Face route does not offer a good look at the mountain until one has traveled 2.5 hours on the Durango-Silverton Narrow Gauge Railroad followed by a 9 mile, 5208 foot hike to Jagged Pass. It is then that one can finally marvel at this complex series of towers. Despite the fact that one is only about 1/2 mile and 850 feet from the summit, it is at Jagged Pass that the climb actually starts. Most well equipped and experienced parties will take at least 5 hours RT from Jagged Pass.

Jagged is made up of relatively solid granite for the area and offers an excellent semi-technical route to its summit. However, identifiying the true summit and finding the actual route are a challenge in themselves. The route is made more interesting by the large number of gravel ledges and amount of intricate route finding that one must overcome in order to reach the summit. It must also be noted that the standard North Face route is the only resonable route to the summit however adventurous parties can surely take other routes.

The North Face route is rated at mostly class 3-4 with one or two low 5th class sections. These ratings however do not convey the seriousness of this route. The exposure paired with the large amounts of loose gravel make the smallest slip or stumble deadly from beginning to end and anything off route will prove much more difficult. Most parties will choose to take a rope if for nothing more than rappelling for a more rapid and safe descent.

For those mountaineers on a quest to climb the Centennials, or the Highest 100 peaks in Colorado, Jagged Mountain is one of the three hardest along with Teakettle Mountain and Dallas Peak. These three peaks offer a fantastic capstone trio requiring low 5th class climbing to reach their summits. The Centennials are a great way to progress your climbing abilities since you can finish on a peak like Jagged Mountain and start on one of the simple peaks that are not much more than a high elevation hike.

One final thing to mention about Jagged Mountain is that it saw it's first known and documented calendar winter ascent in March 2016. 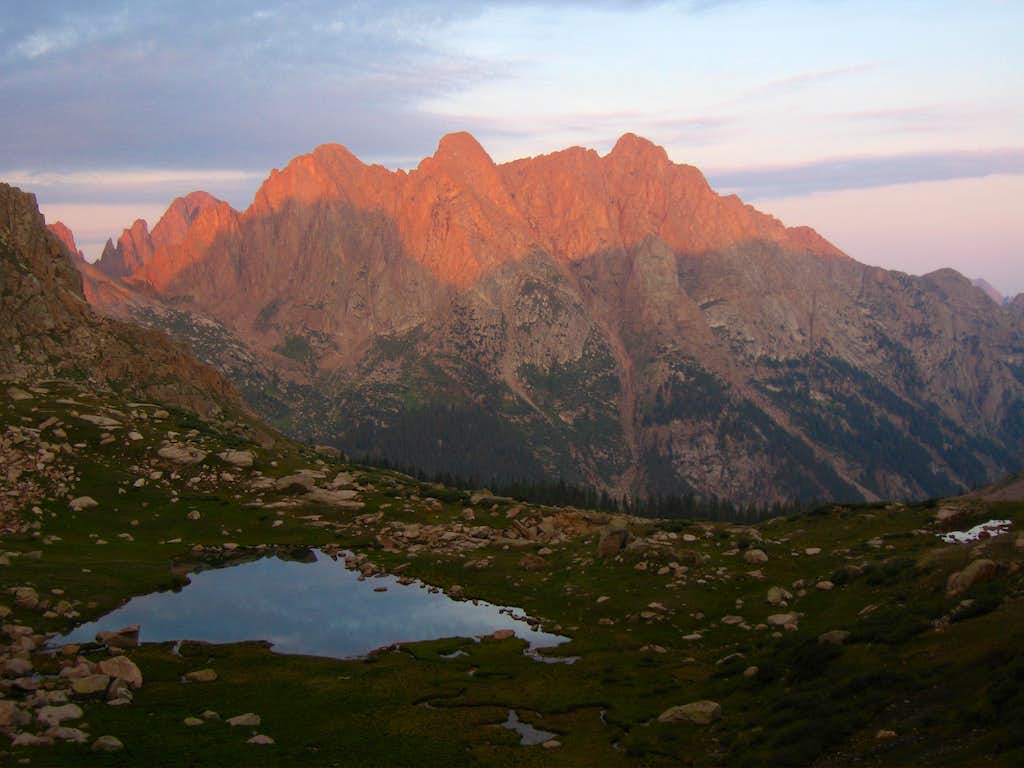 The Needleton TH is the shortest and most used starting point for climbing Jagged. It is located at 8212 feet along the Animas River and requires a 2.5 hour train ride to get to. See the D&S Railroad section for train details. The route does not head up the popular Needle Creek Trail which heads to Chicago Basin but instead goes up the Noname Creek Drainage (about 1.5 miles up the Animas River from Needleton). There is some bushwhacking as you head along the Animas River and over Water Tank Hill but once you reach the mouth of Noname Creek there is a trail along its left side. Make sure you do not get suckered into following the creek. This trail ascends the bench well above and left of Noname Creek. Although this trail is not maintained, it's in excellent shape for the most part. Route finding was difficult in places, but a sharp eye and good sense of direction make it a bit easier. The route from this TH consists of about 9 miles and 5200 feet of hiking one way followed by 0.5 mile and 844 feet of climbing to reach the summit. Most parties will take at least 3 days for this climb.

This approach follows a similar route but substitutes the train ride with an additional RT total of 20 miles and 1600 feet of hiking. This TH is accessible from US 550 at 7.7 miles south of Coal Bank Pass or about 25 miles north of Durango. To be honest, the train ride is worth it!

This TH is also accessible by car and provides access to Jagged via the Vallecito River and North Sunlight creek drainage just north of Jagged. Although this approach avoids the train ridge it does entail 31 miles and 5960 feet of hiking round-trip from the trailhead to the basin just east of Jagged Pass.

The Beartown TH is an alternate for an approach to Jagged via the North Sunlight creek drainage. At 23 miles and over 7800 vertical feet in gain, it is shorter but more strenuous than the Vallecito approach however simply getting here could be the most difficult part of a trip and surely be an adventure in and of itself. A high clearance four wheel drive vehicle is required for this long and rough road. From Silverton, drive north out of town on CO 110 and drive along the Animas River on this good dirt road for 4.2 miles. Once you get to Howardsville, turn right onto the Cunningham Creek Road (FS 589) and go 1.7 miles. Head left onto the Stony Pass Road (FS 737). After 4.2 miles on this rough road you will reach the summit of Stony Pass. A commanding view of Rio Grande Pyramid can be seen from here. Start descending the other side and continue 6.5 more miles on what is now the Rio Grande Reservoir Road (FS 520) and finally, turn right onto the Beartown Road. Going 5.6 more miles on this exceedingly rough road, passing one difficult ford of the Rio Grande River and the ghost town of Beartown, gets you to the Beartown Trailhead.

The most expedient and practical way to climb Jagged is via the Needleton TH and Noname Creek drainage. The railroad is privately owned and is typically accessed in Durango. As of the summer 2013, the cost of the train is $85 and it's the same whether you get dropped off in Needleton, Elk Park or take the full round trip to Silverton or not. See the schedule for the train below.

Note: This is the updated schedule for the 2015 summer season.

See this site for more information about scheduling and rates for the train. 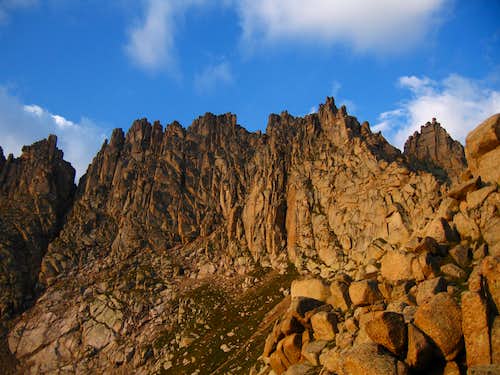 Established in 1975 and expanded in 1980 and in 1993, the Weminuche Wilderness is Colorado's largest and most spectacular wilderness encompassing portions of two national forests, the San Juan and Rio Grande. Containing almost 500,000 acres, the Weminuche is over twice the size of Colorado's second largest wilderness and contains almost 500 miles of hiking trails. The name comes from the Weminuche tribe of the Ute Indians and is pronounced Wem-in-ooch.

The Weminuche is king of the American high country. The average elevation of this wilderness is over 10,400 ft., making the San Juan Mountains of the Weminuche one of the highest mountain ranges in the continuous United States. The Continental Divide Trail runs through the wilderness from Stony Pass to Wolf Creek Pass for 80 miles and averages over 12,000 ft. Bring your backpack, your ice axe, your rope, and your camera as this is one of the finest wilderness areas in the country.

This wilderness is not for the inexperienced or the unprepared. High winds, extreme lightning, heavy snowfall (over 500 inches a year), extreme avalanche conditions in the winter, and rockfall can make this place a nightmare for those who take this wilderness lightly. Storms can come about suddenly and with little or no warning. Leave an itinerary with a responsible person and be prepared for any of these conditions even if the weather forecast seems favorable.

For a better wilderness experience, try to stay away from Chicago Basin. Chicago Basin is home to three of the Colorado 14ers and way too many people. Many of the animals especially the goats here are used to people and will ransack your camp. There are plenty of other places in the Weminuche for which to enjoy. Please have respect for this delicate environment. Pack your trash out and do not feed the animals!

The Western portion of the wilderness contains Colorado's most rugged, steep, and alpine peaks while the eastern portion contains miles of unspoiled peaks, rivers, lakes, alpine meadows, and some of the better forests in the state. Three peaks in the Weminuche rise over 14,000 feet however it's the 13ers that make this area so special. Many of the peaks contain technical routes while some require technical ascents. Some of the most difficult peaks to climb in Colorado can be found in this wilderness. Two great American Rivers, the Rio Grande and the San Juan, begin in these mountains.

Jagged is located fully in the Weminuche Wilderness area. No permits are required nor are there designated camping sites. Wilderness travel and camping regulations should be followed. The Forest service recommends that toilet paper be burned or packed out due to the animals digging it up and strewing it around. They also recommend that food and other items be hung due various animals in the area that might be interested. Keep in mind that there is one spot in the wilderness where rangers frequent and camping is not allowed. Chicago Basin and the area surrounding Twin Lakes is a "No Camping" zone and this is enforced. People wishing to camp while making an ascent of the Weminuche 14ers must do so at treeline, 1,400 feet down the trail below Twin Lakes. 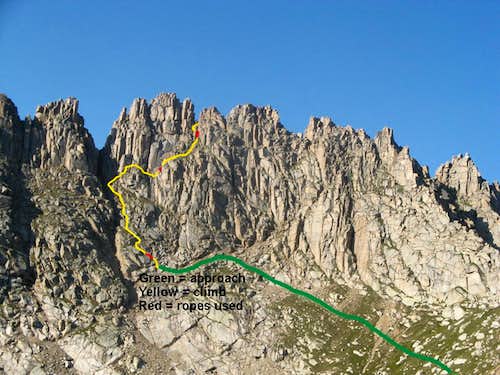 Jagged is best climbed between mid-June and late September. Snow can persist through July and may increase the difficulty of the climb. The other times may have lots of rain that will also make the route slick and more difficult. Also note the train only runs from early May through October. 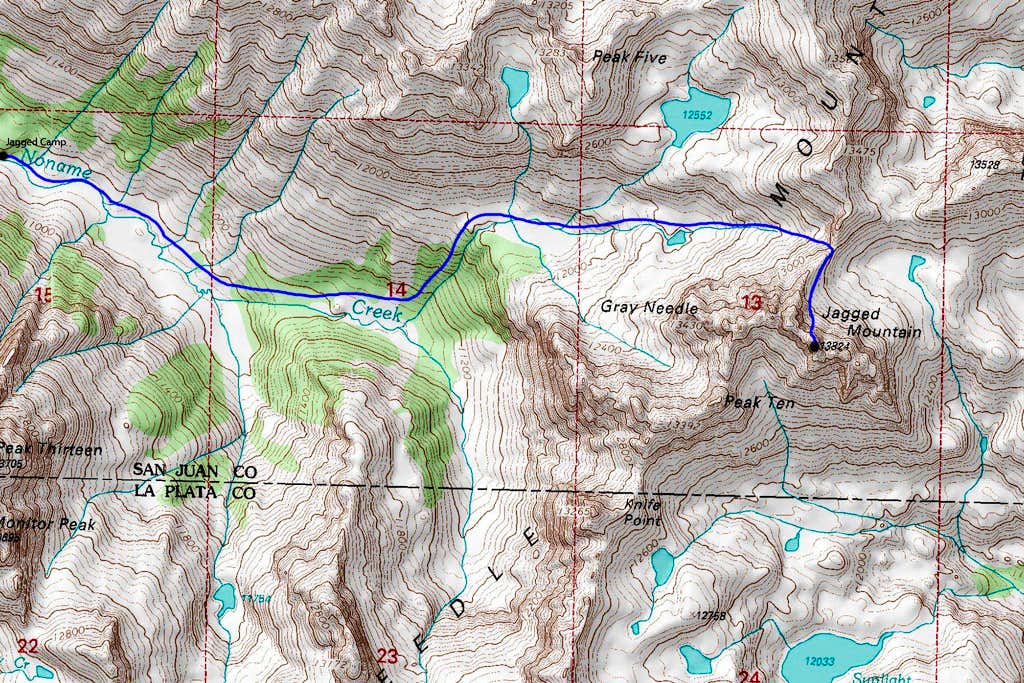 Another Awesome TR by Kevin Baker

TR by Scott and Amy