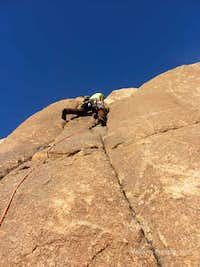 Dow Leading Toto Meets the Bighorn, 5.8
Oz is a pretty cool spot in Joshua Tree and you are almost guaranteed to have it to yourself, at least I always have. Munchkinland contains the closest objectives to the road in Oz: No Place Like Dome and Voodoo Dome. It is easy to climb most of the routes at both locations in a single day and they are each located less than a mile from where you park. Depending on temps (shade) would determine which dome is best to start. Voodoo gets pm sun, No Place Like Dome is mostly shaded all day. 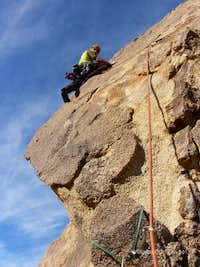 Dow Leading Walking the Dog, 5.9
The main attraction on Voodoo would be Hourglass (5.10c) and Walking the Dog (5.9). These are bolted routes located side by side on the upper southwest face. It takes a 5th class approach to reach them or to be more efficient, you can simply climb the Lollipop Guild (5.7) and traverse right at the end of it to reach the base of these upper level routes. Miramontes guide, the most comprehensive for the area, contains only five routes at Voodoo. However, there are quite a few unpublished routes on the north face on excellent dark varnished rock. There is a fixed rap (2017) at the top of the feature that raps the northwest face. Toto Meets the Bighorn (5.8) has its own rap. It is designed to drop you down the opposite side, but my 2nd did not want to clean the route and I easily rapped the route and could pull the rope no worries even though it is not set up to be pulled that direction. The published routes are quite warm unless climbing early in the am which makes this face more of a winter destination.

Miramontes guide calls this a one mile hike and that seemed accurate. From the 29 Palms National Park entrance, drive several miles looking for a small gravel pullout with a nature placard on the right. I am not talking about the full on trail-head on the right with ample parking but rather a small 2 or 3 vehicle pull out on the right. From there you can see the boulder choked canyon which is Munchkinland. No Place Like Dome sits on the left side of the wash as it bends right. Just follow a wash heading into the canyon southwest from the parking area. You should be able to match up No Place Like Dome with a photo I provided once you enter the canyon. Voodoo Dome or at least the routes on Voodoo Dome are not visible from the approach. Head up the first gully on the right as you enter the canyon on approach (well before you reach No Place Like Dome). Follow the narrow wash up the hill and turn left at a significant boulder (spaceship size). Voodoo is the large objective up on the left side, first one you come to. Circumvent the northwest side to a col and descend to the southwest wall. Lollipop starts right below the col and is easily spotted via its bolts and photo provided.

Routes Listed Left to Right as you face the Southwest Wall


Separate Features to the East of the Main Wall