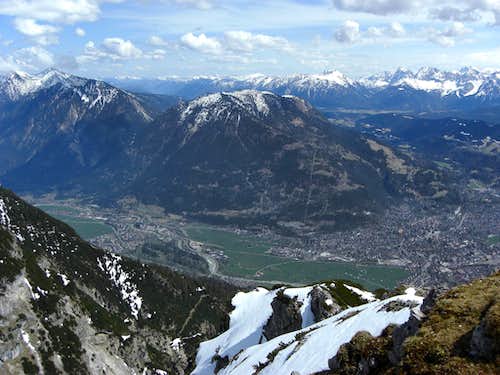 First of all - as this is an English speaking (and writing) community:

Standing high above Garmisch-Partenkirchen, Wank is, despite of the minor height, a remarkable mountain. In former times Wank was named “Eckenberg” (Edge Mountain) because it stands so impressive at the edge of Garmisch-Partenkirchen valley. It is a good viewpoint, too: you can study the huge western rockfaces of Karwendel ranges, e.g. Soiernspitze, Wörner, Tiefkarspitze and Westliche Karwendelspitze. The northern rockfaces of Wetterstein range from Innere Wettersteinspitze in the east to Zugspitze in the west are standing in front of Wank. With most summits of Estergebirge in the north and some Ammergau mountains in the west the 360 degree view is completed.

Wank belongs to the Estergebirge and is one of the southernmost summits of this small part of the Northern Limestone Alps. With routes coming up from the south, north and east you can combine a trip to Wank summit to a nice loop. Especially the southern route is full of vista points for the surrounding mountains and can be recommended.

Wank is a mountain with a cablecar leading to its top, which can be a sort of huge setback. There is an alpine club hut on the top, too. And yes, it can be crowded and noisy. But the good news is:

1. the cablecar does not run all year round - because they have removed some ski-lifts and you will have no more downhill skiers up there;

2. Wank consists of three different summits (Wank, Ameisberg - which, funnily enough, means Ant Mountain - and Roßwank), some equiped with wooden sun loungers - so crowds tend to disperse (or queue up at the counter of the hut for the next Weißbier.....).

The easy accessibility of the summit makes Wank a prime target for paragliders.

In winter Wank is a short and easy ski hike especially in times with high avalanche danger because it is nearly avalanche save. NEARLY !!

Wank is not a very demanding mountain and - maybe - most people will think it not worth climbing. But imagine one of those rather “special” weekend days: you went to bed very late and in the morning you don´ t want to get up and at 10 a.m. the sun is shining and at 11.30 you think, shit, why was it that late last night and then - maybe - Wank can be an option to get out and up just for the fun of it............... 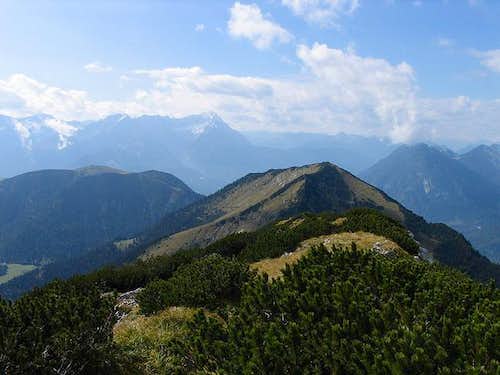 Wank (lower left) as seen from Bischof; Zugspitze in the background (pic of user Luidger)

Trailheads for Wank are

The railway München - Innsbruck gives access to the Loisach valley and the trailheads Farchant, Partenkirchen and Klais. There are railway stations at these villages. Kaltenburnn can only be reached by car or bus. 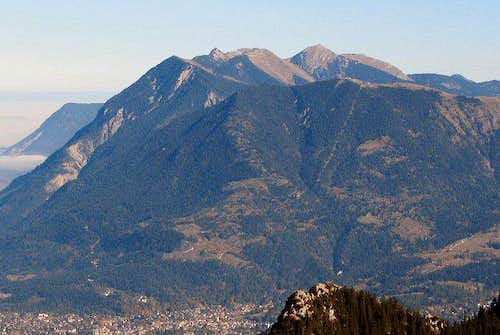 Wank in front of Estergebirge (pic of user Bryan Benn)

From Partenkirchen / Wankbahn
follow the forest road to Esterbergalm and proceed as described above. Alternatively follow the south slope trail to Eckenalm and in some zigzags up to Wank.

From Schlattan / Höfle
follow the trail up to the broad col between Roßwank and Rotenkopf. The trail goes up the east ridge to Roßwank and Wank.

From Wallgau / Klais
follow the forest roads and trails through long Finzbachtal to the west until you reach Esterbergalm. Proceed as described above (Farchant trailhead).

The ski route
follows the old downhill route: from Partenkirchen / parking area up the forest road to Esterbergalm. Follow the old downhill slopes up the northern side to Roßwank and Wank. Downhill like the ascent route. 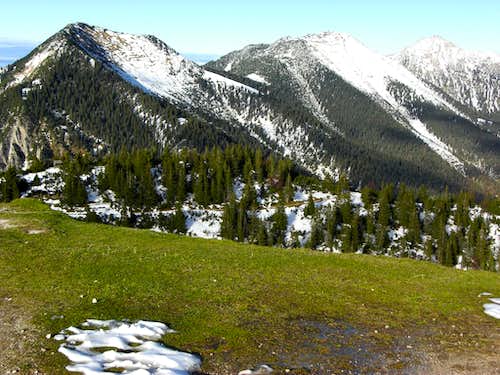 Estergebirge as seen from Wank summit (2009)

Besides that, there are, as far as I know, no further special restrictions for hikers, paragliders and mountainbikers.

Hotels, Bed & Breakfast, restaurants and campgrounds can be found mainly in the following villages: 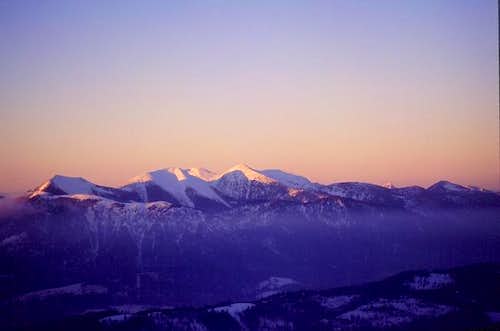 Wank (left) as seen from Schachen (pic of user Benno)

Wank is an all-season summit.

In spring, summer and autumn it is an easy (half – days) hike which requires only normal hiking gear.

In winter it is a ski hike for beginners but - as always on ski tours - don´t forget your avalanche gear. 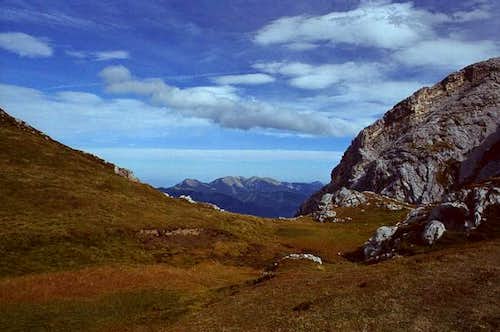 There is no special guide book available for Estergebirge. Nevertheless the Wank trails are described in many guidebooks covering the whole of the Bavarian Prealps. Just ask your Internet to get some ideas ….