This is the large flow in the center of the buttress that you see from the other Devil’s Gap climbs (Malignant Mushroom, Sunshine, etc.). The grade on this one seems a bit variable, when the upper pitch comes in fat it is reported to be a solid grade 4, but what appears to be more common is for the wind to form a maze of mushrooms and detached pillars, making it feel more like a techy 5+. Some photos of this climb make it look downright terrifying, our theory is that WI4+ is kind of like 5.9+, in that it’s likely to be several grades harder by modern standards.

Get to the South Ghost, Dow pretty much has this covered so I’m not going to rehash it, I feel like we’ve driven a slightly different way each time anyways.
From the parking lot hike south through the trees, the route should come into view shortly and there will likely be a trail.
As you near the climb itself a short ice curtain blocks your path, this could be an easy solo but most groups seem to walk around to the left and gear up at the base. 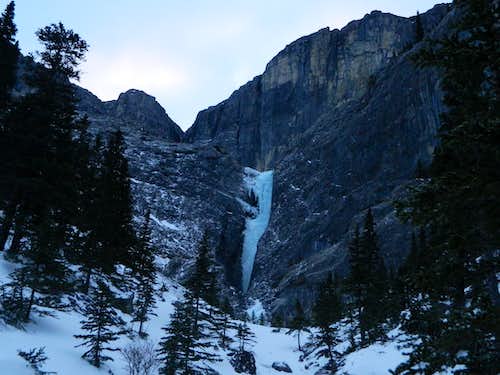 Pitch 2 (WI4-5) - Make your way up the remaining 35m to another bolt anchor, this pitch may or may not be protectable, but rest stances abound.

Descent - rappel the route, 70m doubles make it to the ground in one rap, 60s might do the same.

This climb is north facing, so it is not as susceptible to rotting out in the sun like Malignant and Sunshine, also, being that it is the Ghost, avalanche danger is pretty much nonexistent; so, November through March? A local is welcome to correct me on that one.

Weather in Cochrane (despite being about as far away as Canmore, this seems to be the nearest town aspect-wise, and we couldn't find a more precise forecast)
Gravsports - Will Gadd's site, often has recent route conditions info