Ancient Art is a four summitted tower in the Fisher Towers which are located between Moab and Cisco Utah.

In many areas of the United States or the World for that matter, Ancient Art might be considered a difficult summit. However, here in the Fisher Towers, it is the easiest of all the major summits to obtain (4-5 pitches; 5.11B or 5.9 A0), at least if the Corkscrew Summit is the one obtained.

The vast majority of climbers climbing Ancient Art climb the Corkscrew Summit, considered perhaps the most unusual summit in the world! The other three summits seem to have relatively few ascents. Here is a list of the first ascents of the three of the summits, plus a detached pinnacle:

The North Summit was first ascended (via the Hippie Route) in June 1967 by Herbie Hendricks and Dennis Willis.

The Corkscrew Summit was first ascended (via the Stolen Chimney Route) in April 1969 by Bill Roos and Paul Sibley.

The Middle Summit was first ascended (via the Purebred Route) in April 1971 by Harvey Carter, Dave Erickson and Ken Wyrick.

Kient Art Summit was first ascended (via the Adjacent Art Route) in April 1996 by Pete Takeda and Eric Kohl.

The major summits of the Fisher Towers themselves are some of the most spectacular and difficult peaks to climb in North America. Not only are the peaks difficult and spectacular, but these are among the most unusual and unique summits in the world. Also of interest are the smaller towers and canyons of Onion Creek. The whole area is a fantasy land of nature’s handiwork and even photos fail to capture the unusual beauty of the area. I can guarantee you will never see peaks like this anywhere in the world! Climbing the towers is mostly for experts only, but those who are not in to hard core climbing can still enjoy hiking the Fisher Towers trail, or enjoy hiking part way up some of the canyons along Onion Creek.

The Cutler Sandstone forms the sides of the Fisher Towers, which are capped with the Moenkopi Formation. Despite their rotten appearance, the Cutler Sandstone is probably the hardest sandstone in Utah and is pretty solid. The climbing can still be dangerous however, because it is often covered with a layer of loose mud all the way up and down the towers. The conglomerate below the towers is not solid at all and is best avoided at all cost. 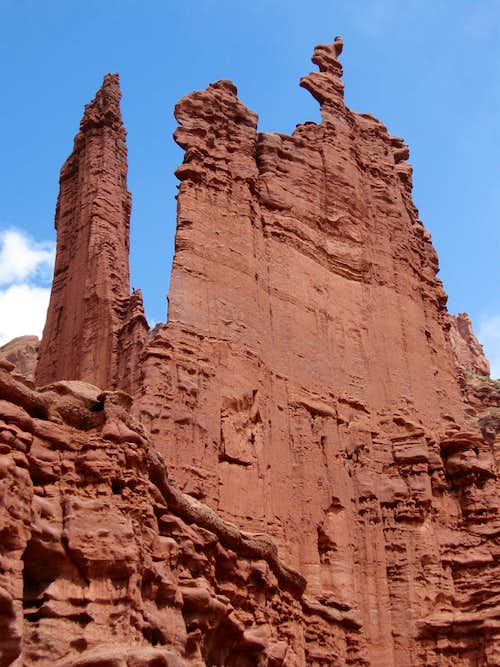 King Fisher (left) and Ancient Art (right) as viewed from the south.

The Fisher Towers Trail is marked in red. Ancient Art is #3. You can see the identity of the other towers by clicking on the map. 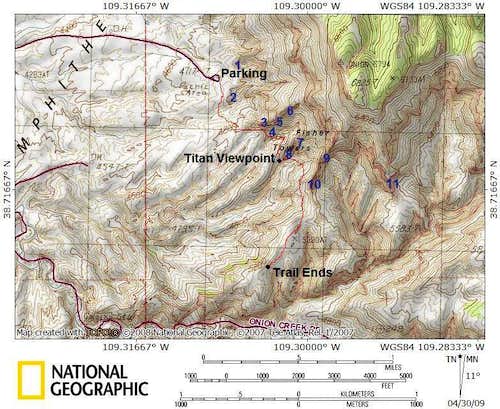 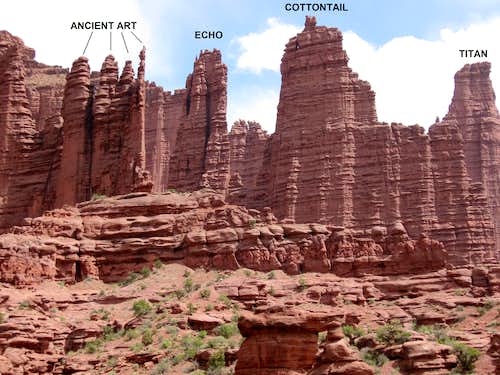 Ancient Art and some of the other Fisher Towers as viewed from near the trailhead.

This is a brief overview of all the known routes on Ancient Art, listed by chronological order in which they were first climbed. For details on all routes other than Stolen Chimney, please see the book Desert Rock III.

This route is rated 5.10+, is grade IV and six pitches. It ascends the north tower from the southeast side of Ancient Art. Pitch 4 is reported to be almost completely unprotected.

This route is by far the most popular route on Ancient Art and is rated 5.11a or 5.9 A0, is grade III and 4-5 pitches. It is a really fun climb, but can be crowded on weekends in the spring and fall. The route ascends the southeast side of Ancient Art and up the obvious chimney. 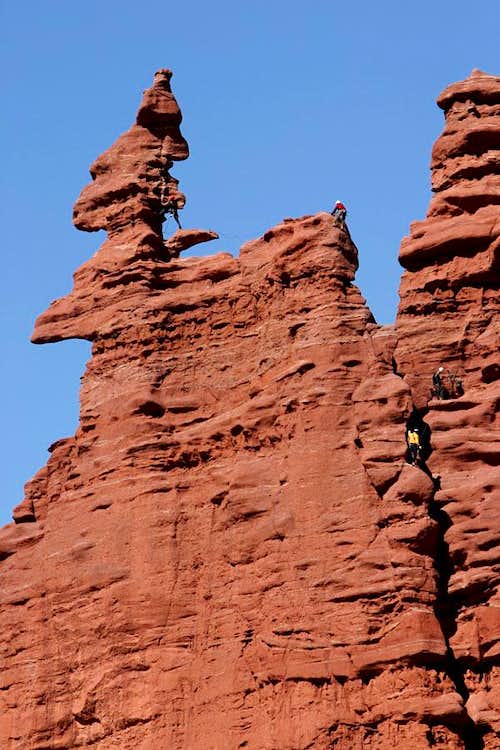 Climbers on Ancient Art. The upper part of P2 and all of P3 and P4 can all be seen. Anna K Dennis photo.

The Middle Summit is actually the highest summit on Ancient Art. The Purebread route is rated 5.10 A2, is grade IV and eight pitches. It climbs the west face of the Middle Summit and is mostly free aid with four aid bolts.

This variation of the Purebread Route climbs the first three pitches of the Corkscrew Summit and then traverses over to the Purebread route. The route is rated 5.10 A0, is grade III and four pitches.

This route variation climbs the first two pitches of the Corkscrew Summit before traversing over and to the top of the Middle Summit. The route is rated 5.10-, is grade II and requires one extra pitch.

This route climbs the minor summit due west of the Corkscrew Summit. It is rated 5.8 A3, is grade III and three pitches.

There is no red tape, but it is important to climb as low impact as possible. 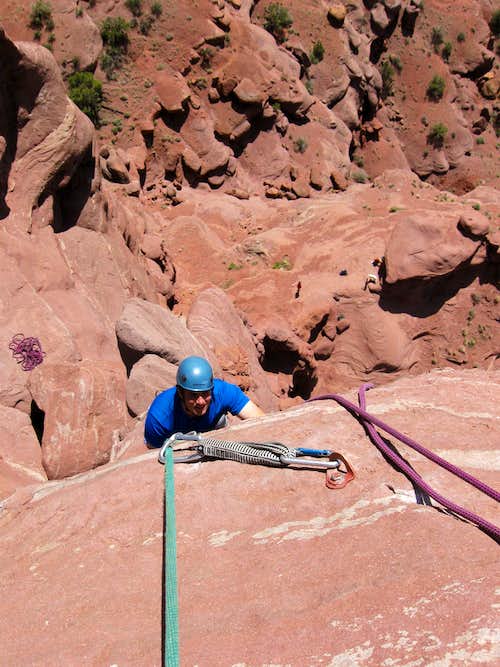 There is no red tape here. This is the top of P3 on the Stolen Chimney Route.

There is a campground near the trailhead and is available on a first come first serve basis. There is no water.

There are also several designated campsites along Onion Creek which is just south of Fisher Towers. Both camping areas have a small fee.

Spring or fall are the best times to climb, though they are also the most crowded. Winters are usually sunny, but can be surprisingly cold (nearby Cisco has recorded temps as low as -36F/-38C in winter). Summers are brutal in the afternoons with temps 100F (38C) or much higher; 110F (44C) is possible.

Since Ancient Art is so popular, this may be one of the Fisher Towers that might be worth climbing in the off season. As mentioned winters are usually sunny and in summer you could get a very early morning start. If you are climbing in the Spring or Fall, then climbing on a weekday might be a good idea. 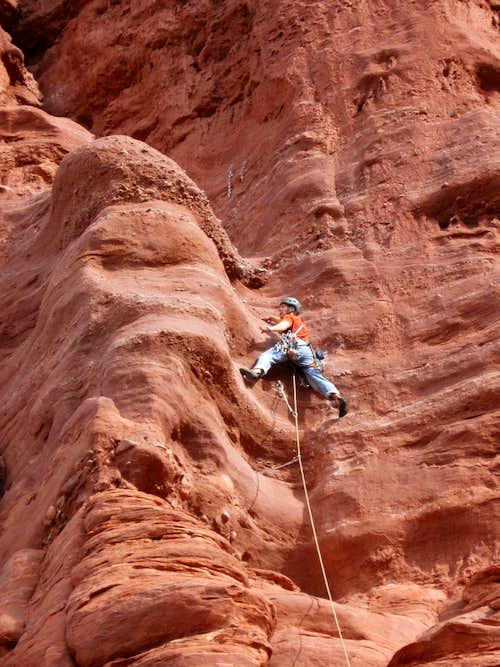 P1 on Stolen Chimney on the Ancient Art Tower in April. 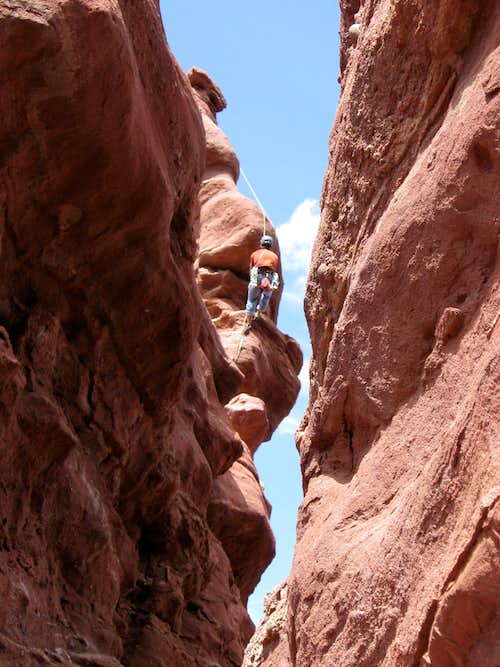 Good weather is normal, but it was really windy on our ascent. This is looking up to the summit while waiting for the other party to descend.