It is our wish to dedicate this page to the memory of our good friend Patrick Wang who perished in a tragic climbing accident on Mount Whitney in California on the very day we were climbing Jah Man. 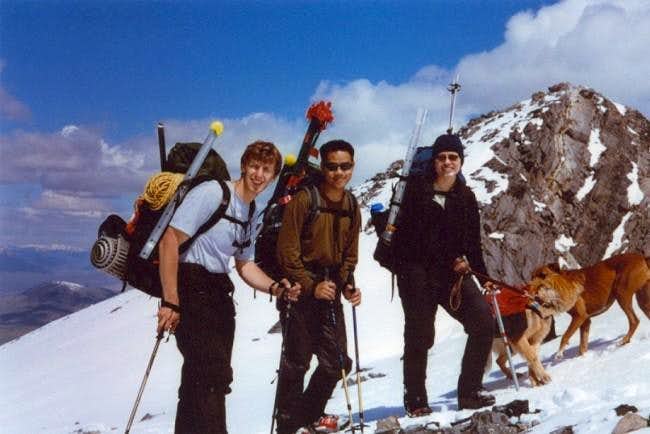 We met Patrick in the first mountaineering class we have ever taken. The class was a new experience for all of us. Little did we know that climbing would not only become our hobby but a way of life for all of us! Patrick loved the great outdoors and quickly fell in love with alpine climbing. He was always up for an adventure - be it small or big - if it involved being outdoors in the wilderness. We have subsequently climbed many peaks and routes together and have always enjoyed his cheerful company. Patrick's interests went beyond climbing. He was the lead guitarist for a local rock band (Spontaneous Woo) and volunteered much of his free time helping others learn mountaineering in the local climbing club (Mazamas of Portland). Patrick was also an avid photographer. Some of his outstanding work can be seen on his website.

The normally clear, blue skies of Utah desert we have come to love were so appropriately gray and subdued on that April 10th day - as if foreshadowing to us the news of this tragedy. It was our privilege to have known and climbed with Patrick. He will be very much missed by us and the scores of friends he effortlessly made during his all-too short life. May you rest in peace Patrick.

Sister Superior Group is a collection of spires located atop a talus cone in Castle Valley between The Priest (to the south) and The Convent Mesa immediately to the north. Sister Superior tower is the tallest and most prominent formation. When viewed from the south, Sister Superior is an impressive sight: tall (~325 feet according to Supertopo) and slender with a seemingly perfectly flat southwest face. From other angles the bulky North Sister (shorter but definitely not sleek) detracts slightly from Sister Superior’s beauty. Other towers in the group (according to Eric Bjornstad’s guidebook) include (from south to north): North Sister (blocky formation attached to Sister Superior near its base), Unknown Sister, Crazy Little Sister, Chimney Rock, Cubic Sister, and Baby Sister. The sandstone found here is of the same (high quality) flavor as that found on Castleton Tower and The Priest: Wingate Sandstone with its characteristic calcite coating. Summit elevation for Sister Superior estimated from USGS maps.

Castle Valley Preservation Initiative:
This pristine and one-of-a-kind chunk of land is not safe from development. Read more here and more importantly donate to the cause if you value your climbing in Castle Valley.

DON’T SPOIL THE SOIL!
Much of the SE Utah desert is home to Cryptobiotic Soil Crust. Watch where you step as this stuff is extremely sensitive and this “stuff” is also what’s keeping erosion at bay on hillsides. The NPS recommends using established trails, sandstone slabs, and/or sandy washes for your foot travel. For further information see the many links provided by Dr. Brian Jenkins: link 1, link 2, link 3, link 4, link 5, link 6.

From Moab in Utah, take US 191 north to its junction with Utah highway 128 (a.k.a. The River Road) on the northern outskirts of town. Turn right (east) onto River Road and follow it for 15.7 miles to the junction with Castle Valley Road (on right). Stay on River Road for another 0.8 miles until you reach an indistinct dirt road “forking off” on the right side (low angle turn). This dirt road is 100 – 200 yards before a small bridge (with guard rails) over a wash. Follow this dirt road (which itself follows the bottom of a wash) for 2.2 miles from the River Road. Quality of this road quickly deteriorates and the full 2.2 miles drive will require a high clearance vehicle. However, we were able to take a low clearance sedan for almost 2 miles (couple exposed rocks blocked further progress for us). The indistinct trailhead is located as the dirt road makes a wide right turn. Look for a mid-sized cairn on the left just past where the road crosses a decrepit fence. At this point, Sister Superior tower is almost directly to your left.

Making it to the trailhead is the crux of the approach. From the above-mentioned cairn, follow the well beaten climbers’ trail (please stay on trail – see the comment above regarding crypto. soil). The trail is nicely graded and very clear for the most part. It gently climbs up to a ridge/narrow mesa (note the cool-looking tower off to the left) which it then follows to the southwestern base of Sister Superior. Note that the trail becomes less distinct a few hundred feet below the base of the tower but if you’re careful, you’ll find the sporadic cairns marking easiest passage. Approach time varies depending on where you park (~1 hour for us where we parked ~2 miles from River Road). Other towers can easily be reached from the SW base of Sister Superior where the trail deposits you. For routes on the east face of Sister Superior, traverse the base south then east (rightwards). Watch your step over gravelly slabs.

Drive-In Update:
Courtesy of Dan Leonhard: For those planning a trip, a recent storm (as of Oct. 24, 2006) turned 95 percent of the roads/trails to washes. Road access was impossible for our passanger car and could be difficult for some high-clearnce vehicles. A cairn still marks the turnoff but keep a close eye because rubble is everywhere. The trail on the cone is still in good shape.

Sister Superior towers (much like The Priest, Castleton Tower, and The Rectory) lie on BLM land. There are currently no permits or fees required to hike in the area or park at the trailheads. Dogs are allowed in the backcountry here (pick up their turds!). Please practice zero-impact backcountry use.

Given the desert (albeit high desert) environment, the rock is climbable year-round. Keep in mind that winters can be wet and chilly and summers are no doubt unbearably hot. From personal (limited) experience, we encountered better weather in mid-winter than in the spring time (stormy!).

The BLM land in Castle Valley seems to lack strict restrictions. If you’re going to camp near the trailhead, please practice low impact backcountry behavior (technically not sure how legal it is). Additionally, good primitive camp sites can be found at the standard trailheads for Castleton Tower. Please be sensitive and don't trample the Cryptobiotic Soil Crust (see above information under Overview.

In addition, BLM operates a number of campgrounds along the River Road. These require registration and a fee. I don’t have the details yet (will try to get info. on these).

For most up to date climbing conditions, try calling the friendly folks at the local climbing climb shop, Pagan Mountaineering located in Moab, UT. Their number is 435-259-1117.

If a guidebook mentions Sister Superior, it definitely talks about Jah Man route. In terms of other details, see below.

(1) Eric Bjornstad’s Desert Rock III: Moab to Colorado National Monument describes multiple routes on Sister Superior in good detail including Jah Man (and Jah Man Direct variation a.k.a. Za Man) and Savior (with its own variation). It does not mention the bolted arête route to the right of Jah Man. In addition, Bjornstad describes summit routes for all seven of the principle spires in the group (two routes are listed on North Sister and Baby Sister; other formations have one route each described). Photo topos given for Jah Man and Za Man; photos of climbers on Baby Sister, Crazy Little Sister, and Unknown Sister are also shown.

(3) Cameron Burn’s Selected Climbs In The Desert Southwest lists only Jah Man and includes topo and photo topo. Burns’ description of the rack is kind of off!

(4) Stewart Green’s Rock Climbing Utah guidebook describes both Jah Man (with topo) and Savior (no topo) routes on Sister Superior. Green gives the 4th pitch thin hands crack a 5.10b/c rating (which we like ;)

(6) Sister Superior Group page on climbingmoab.com is a good reference for a handful of routes in The Group.

Vast majority of climbers who make the hike up to the Sister Superior group climb only its namesake formation and do so via the classic Jah Man route. This in fact (according to Bjornstad’s guidebook) was not the original ascent line on this tower (Savior Variation as it’s called today was). Eric Bjornstad’s guidebook gives descriptions for the largest number of routes in the group:

(3) Jah Man Direct a.k.a. Za Man is a variation to the first pitch of Jah Man and is rated at 5.10+. Both Bjornstad and Supertopo provide descriptions for this one. For photos of this variation see here and here.

(4) Unknown arête right of Jah Man has been bolted. Not sure if it tops out (possibly tops out via Jah Man top pitches?) but bolts can be seen up 2 or 3 pitches from the ground. Bolts look new and I’d guess it’s a modern sport route of some tremendous difficulty. Research climbing mags or seek beta on climbingmoab.com message boards.