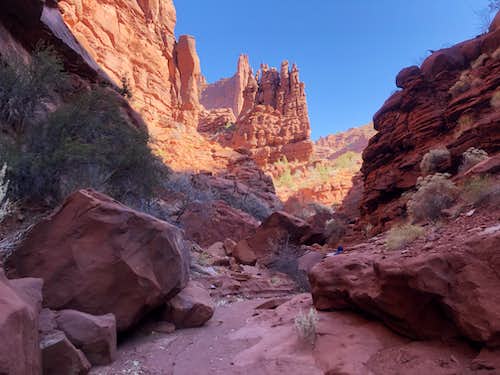 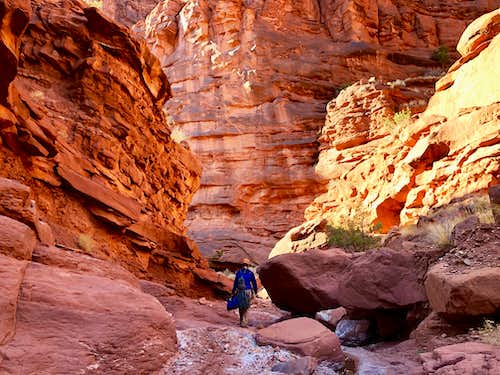 Merrymen Tower is five summit formation located in the an area called Mystery Towers. It is one of the easier climbs in this area, but do not be fooled - it is rated as 5.9 and there is a lot of exposure on less than optimal rock. The approach through a canyon and the scenery is absolutely fantastic. You can also check out nearby formations of Alien Towers.

The best description is in Rock Climbing Desert Rock III by Eric Bjornstad.

"I loved the approach to the Mystery Towers. I had seen them from the top of the Titan in the spring of 1962 and again in 1966, but I cound see no way to to to them even thought they were only a half a mile east of the Fisher Towers. Bill Forrest obtained a set of stereoscopic aerial photos. We were delighted to see that a side canyon lef from Onion Creek to the towers.

The high desert is unique and exotic. To someone from Europe or Japan, or from more temperate parts of the United States, the desert of Utah is as foreign as another planet. There are unusual land forms, not only towers but arches, buttes, mesas, and - most intriguing of all deep and narrow canyon that promise fabulous discovery." George Hurley

Absolutely agree with George Hurley. Even the approach is an adventure on its own.

The Tower is called Merrymen - after the group of outlaws who followed Robin Hood.

The route is called Robin Hood and is rated as 5.9. It is exposed and the rock quality is questionable (muddy section lower down, higher up it improved). Some sources add PG 13 rating, agree with that one. 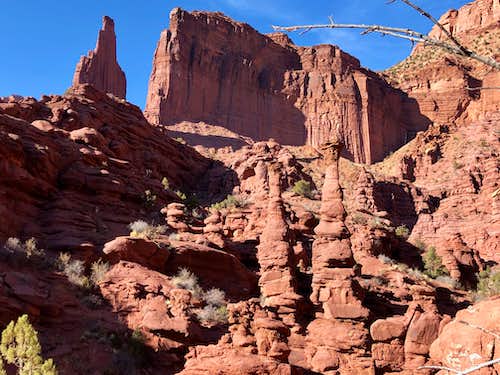 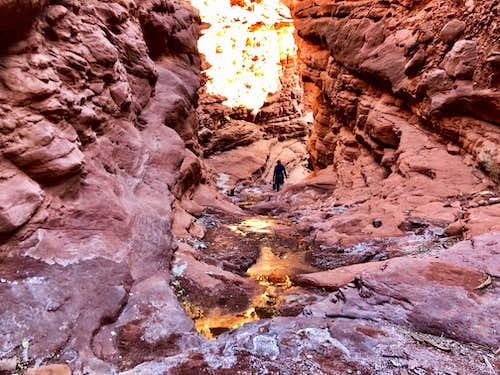 From Moab: from the junction of Hwy. 191 and Hwy 128, drive east 22 miles along the Colorado River on Highway 128. Turn left on well signed Onion Creek Road and drive about 4 miles on the road. The road is gravel and after about 1.5 miles there is a sign, 4 WD vehicles only. I would imagine Subaru would be just fine. The road crosses Onion Creek many times (per Desert Rock 16x). It is about 4 miles to a narrow a bridge spanning over deep gorge of Onion Creek at this section. Drive 0.3 miles more and there is a small pullout parking lot. Basically the first crossing of Onion Creek after the bridge is where you want to enter the approach canyon for Mystery Towers.

There used to campsite, but this was buldozed over. They do not want free campers up there.

The drive along Highway 128 is very scenic, so is the Onion Creek Drive.

Approach: follow the drainage (very little water), you walk on dry land as it enters a deepening canyon and it also narrows. The approach is very scenic, canyon adventure on its own. I think it is almost 4 miles in and ascend is about 900 feet. There are a few forks of the main canyon, but if you are not sure always turn right. Near the Merrymen Tower, you will encounter wet slab (we had it iced up) with fixed lines. We used it only as hand lines and even when little slippery, it was easy to get up. From this point, when you look up the canyon, Merrymen Tower is the obvious formation just straight ahead of you. Follow the canyon to the foot of the Merrymen and before the formation, scramble along its west side to the north end where the climb starts. There was no trail here. The mileage on Gaia link below is NOT accurate. I recorded it correctly to the tower and then we went to check out the Alien formation and here it turned off by mistake and restarted to record about 2/3 way down the canyon; 2 different starts because initially we could not find it, take the left line for the start as an accurate one). 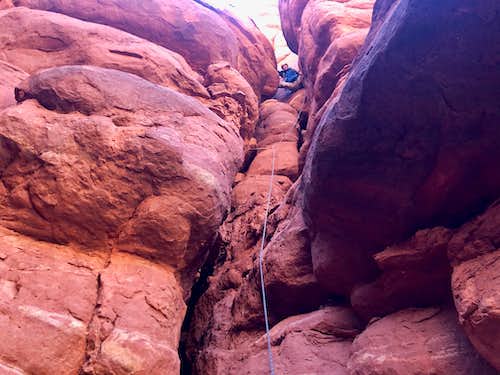 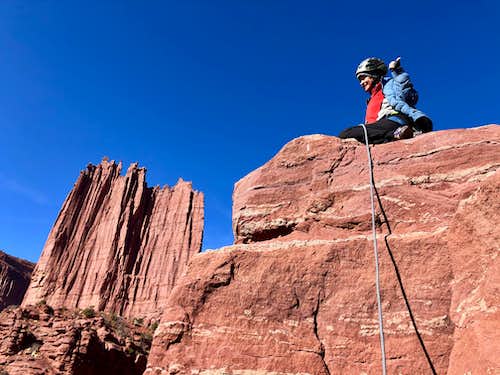 Pitch 1: The route starts in a wide chimney on the north end of the tower. The chimney is initially dirty, but about 1/2 way up the rock becomes slightly better with some embedded cobbles. The gear is sort of ok, with some runout sections. After about 10 meters move into another chimney (you are between 2 different Merrymen) - obvious when you are there - this one requires wide stemming and here are some of those cobbles I mentioned. When it appears then the chimney is ending, there is a short traverse to the right. The traverse moves you onto the west side of the formation. The first couple of moves onto the traverse are scary - dirty hand and foot holds and very exposed, but Desert Rock rates is only as 5.6. The later moves are easier and lead to a small ledge with a wide crack. Belay from here. Only about 35 meters long, but if you would climb higher there would be a lot of rope drag.

Pitch 2: Very short and much easier. Move right above you belay onto a saddle between Merrymen and traverse left to the rappel anchor (visible from you belay spot). Clip the rope into it and do a few short moves onto the summit block. You will have to down climb this section, but it felt relatively easy. The rock is better and there are hand and foot holds.

Descent: Rappel from the anchor on the west side of formation. The rappel anchor consisted of a rope wrapped around one of the Merrymen towers. It looked fine in November 2019, but always check it. On the rappel you have a choice to go over or under a large boulder - go over it, otherwise you risk your rope getting stuck. (We went under and eventually pulled the rope with some effort). We made it down with one 70 meter rope and had plenty left. I think 60 meter would be sufficient.

Gear: Rack of camalots from 0.75 to 5, double on 1 and 2. Slings. Extra webbing in case rappel anchor needs to be replaced. Cover your legs and arms for this one, otherwise you will be scraped all over (many awkward chimney moves).

There are no fees to hike, climb, park in the area. The Onion Creek Road is narrow and crosses many creek drainages, so high clearance and 4 WD are recommended.

Year round. Summer can be hot, winter can be cold. It rarely rains, but make sure that sandstone is dry. Probably spring and autumn are the best. Also pay attention for rain storms, the canyon would be a bad place in the case of flash flood.

There are two developed campgrounds at the start of Onion Creek Road: Upper and Lower Onion Creek.

There are very limited opportunities for free camping along Onion Creek Road. This road is narrow and winding, crossing Onion Creek many times. There is a danger of floods in many places and on higher grounds they closed up areas to free camping. We were able to drive very far (cca 3 miles past the start approach for Mystery Towers) and found a great spot to camp with a primitive fire pit.