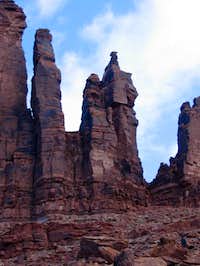 Like its immediate though slightly shorter neighbor the Lighthouse Tower, Dolomite Spire is a mid-sized desert tower located above the Big Bend area of the Colorado River 7 miles outside of Moab on the River Road (UT 128). It is located on a ridge that partially connects the Big Bend Butte (to the NW of Lighthouse) to the parent mesa (SE of Lighthouse). The tower is probably somewhere around 300 feet tall (on river side, 210 feet on “backside”) and is composed primarily of the relatively high quality Wingate sandstone – way better than Arches formations though probably not quite as solid as Castle Valley towers. DON’T SPOIL THE SOIL! Much of the SE Utah desert is home to Cryptobiotic Soil Crust. Watch where you step as this stuff is extremely sensitive and this “stuff” is also what’s keeping erosion at bay on hillsides. The NPS recommends using established trails, sandstone slabs, and/or sandy washes for your foot travel 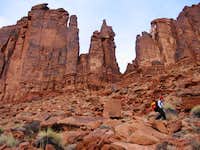 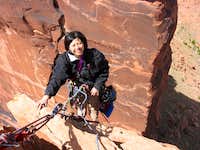 From The West (Moab, UT) Just beyond the northern outskirts of Moab, UT along US 191, make a right (NE) onto UT 128 (a.k.a. River Road). This is immediately before the bridge as you’re driving from Moab. Follow the River Road for 7 miles and park just after mile marker 7 – some pullouts on the right side of road and more on the left side. From The East (Colorado) From I70 in UT, take exit 212 and follow the frontage road through the ghost town of Cisco (~ 5.7 miles from the exit) on a SW heading. Turn left onto River Road (UT 128) and follow it past the turn off for Castle Valley Road (at 28 miles from exit) until just before mile marker 7. Park at one of the pullouts on either the river side of the road or the other side. The Hike Dolomite Spire (left) and Lighthouse Tower (right & shorter) are obvious from the River Road. There is a decent trail leaving the road roughly in line with Dolomite but it’s difficult to find right away from the road. So pick the easiest line and boulder hop your way to its base. Generally stay on boulders and wash bottoms to minimize trampling the crypto soil. Your goal is the notch just right of the base of Lighthouse Tower (notch separates tower from parent cliff to its right when viewed from River Road). Approach time is 45-60 minutes. A 30-foot 5.7 pitch needs to be done to access the other side of both towers via the notch. Alternatively, some guidebooks suggest hiking around the Big Bend Butte (left of Dolomite Spire when viewed from River Road) to access the backside routes on tower.

None. Dogs are allowed but please pick up their turds. Avoid trampling the crypto soil (see above) as much as possible. Please practice low impact backcountry behavior. 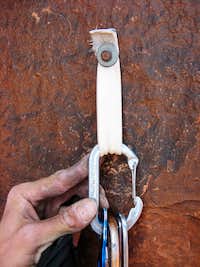 Good free camping can be had at the trailheads for The Priest and Castleton Tower. There are no water sources in the backcountry however. More specifically, good (primitive) campsites are available off of the dirt road near the trailheads for these towers. However, best campsites can be found along the second dirt road – i.e. from Castle Valley Road, pass the trailhead turn off road at 4.6 miles and take the second dirt road (also on left) few hundred yards further. Several hundred yards from Castle Valley Road look for campsites. 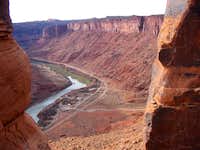 Year round. Winters can be wet sometimes and the area does get cold. Summers are oppresively hot no doubt. Also check: Moab Climate Summary Page.

(1) Kor Route TR by Brad is here. (2) Beta page for Dolomite Spire on mountainproject is here.