With a name like Ant Knolls, this little mountain caught my curiosity. Thanks to Eric Willhite, he had put together a trip report about his visit and it was his information that inspired me to check this one out. Check out the link I've placed at the bottom of this page, his information was extremely helpful and I recommend that you check out his offerings.

This one is tucked away in a spot that rarely attracts hikers although it is located just a bit off the Great Western trail and every year a lot of runners pass just underneath as they compete in the Wasatch 100 ultra marathon race. The road up to Pole Line Pass isn't one I'd recommend on a nice weekend as there are a ton of traffic on the dirt road that leads to the pass.

It is not high on the prominence list with just under 500 feet of prominence but its elevation is only 140 feet short of being a lofty ten thousand feet high. Still, it was one that was worthwhile thanks to the tremendous views in all directions and it was recommended by Eric for hiking with small children. One caution however, mountain bikes are very active on a portion of the trail and you need to pay attention to them so both hikers and bikers don't end up a tangled mess. The mountain bikers I met were very polite and we were able to share the trail in harmony.


Eric Willhite's directions worked great:
"There are 3 ways to get to Pole Line Pass but I only recomend one. Access via Wasatch Mountain State Park, highway 220 from the Parks Golf Course also called Snake Creek Road. The road isn't to bad at first but near the end it's a bit rough. Passenger cars do make it but need to take it slow."

Armed with that information, my wife and I drove through Midway to the Wasatch Mountain State Park and followed the Snake Creek road as it twisted and turned its way up to the 8900' level of Pole Line Pass. It is paved initially but turns to good "dirt" a couple miles past the golf course. With a speed limit of 25 mph, it takes time but as you travel on, it gets slower due to the road itself. I was happy to take my Tacoma and not my wifes Caravan. Yes, a passenger car could make it but you wouldn't catch me taking mine up there.

Maybe a Suburu Outback but make sure you have good tires. Mostly we saw lots of ATV's and motorcycles and although we did this on a Saturday, I'd really suggest a weekday as a better time to go after this one. Overall, the road is pretty decent but it would make more sense to do it on a weekday and avoid a lot of the traffic it gets. Parking at Pole Line Pass is generous and we found a spot near the trail itself. 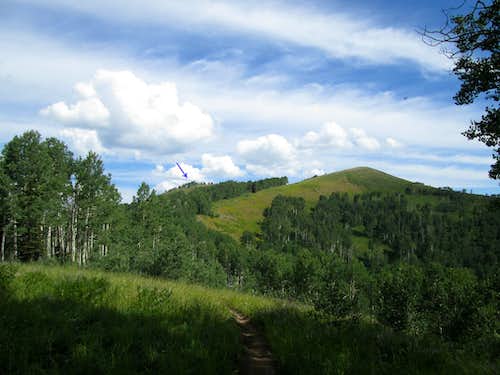 View of the terrain ahead


From Pole Line Pass, the Great Western trail heads north (#157) and it was in great shape. I encountered 5 mountain bikers on the first part (all coming downhill as I was hiking up) and later in the day two motorcyclists. I'm not sure if motorcycles should be on that trail but they seemed to think they were fine. A few switchbacks gets you to a saddle that then drops down to a fork.
Once you get to a fork (about 9/10's of a mile from the pass), the way to go is to the right. It is the Great Western Trail and from there you can see the way is a bit rockier for a bit as you gain elevation to where you contour around a false summit.

SP member Zeejay mentioned  that she did this from the Albion basin near the Catherine's pass TH so that is another way to access this one. See her climber's log entry for her comments.  Having no experience with this approach, I leave the map study up to you. 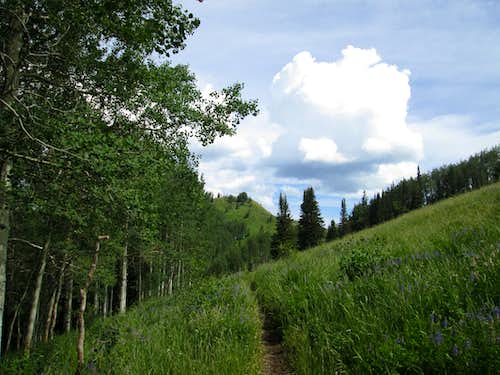 
None. Located in the Wasatch National Forest. For additional information, contact:

You could car camp at Pole Line Pass or at nearby Deer Creek Campground. Motels are available in nearby Heber City or any of the other towns like Provo or Salt Lake.

One of the key rewards for taking the effort to do this one are the nice views from its summit. Mt. Timpanogos, Mill Creek Peak, Box Elder Peak, American Fork Twin peaks, Sugarbush and Red Castle are all around you and a nice view down to Heber City and the Deer Creek reservoir and over to the 10,000 foot high Wasatch Plateau is also included. 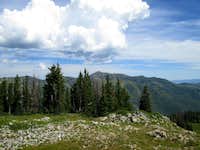 Eric has put together a lot of trip reports for peaks that often fly under the radar. I've used his information many times for finding a neat local hike and let me post a couple links: