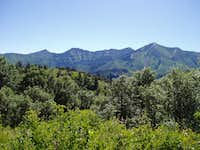 Shingle Mill is the first Peak as you go from left to right. Freedom Peak is the second peak.
This pyramid-shaped peak has not been officially named and as such it is not labeled on USGS maps, however locals know it as Shingle Mill and an effort is being made to have the name officially recognized. Read about the naming effort at deseretnews.com.

May 17, 2009 -- According to summitpost member Rockhop23 "The name 'Shingle Mill Peak' was officially recognized by the USGS in 2007. It should soon start appearing on maps."

As the crow flies Shingle Mill Peak is located only 0.6 miles (1 km) NxNE (23°) of Freedom Peak, in the Uinta National Forest, on the southern end of the Cascade Saddle. 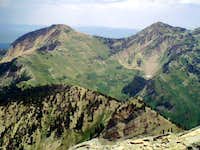 Shingle Mill, is the peak at the top/left, as seen from Cascade Mt. At the top/right is Freedom Peak. 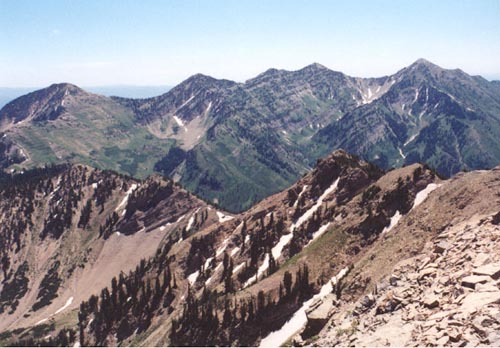 Shingle Mill, is the peak at the top/left, as seen from Cascade Mt. At the top/right is Provo Peak.
Shingle Mill is located in the backyard of Provo Utah. Provo is 42 miles south of Salt Lake City via I-15.

To reach the Dry Fork Trail use the Squaw Peak Trail (road). Squaw Peak Trail is accessed from Provo Canyon and Hwy 189. From Salt Lake City take I–15 South towards Provo. Continue on I-15 to the 800 North Orem exit. Follow 800 North east through Orem to Hwy 189 in Provo Canyon. Within two miles watch for a sign on the left indicating the Squaw Peak Trail. It begins as a paved road but turns into a rocky, washboarded, dirt, jeep trail soon after it forks and as such a high clearance vehicle is recommended. At the fork take the left path. Continue to the Dry Fork trailhead located immediately past the old Rock Canyon Campground (now closed). The trail is marked with a vertical, brown, Forest Service marker, and is located at 7,255 ft. There is no formal parking area, but there is room for one or two vehicles to park along the side of the road. Follow this trail 3.5 miles, due east, up through a beautiful aspen and pine forest to the Cascade Saddle at around 9650 ft.

For the Big Springs Trail, again take Hwy 189 up Provo Canyon, but rather than exiting at the Squaw Peak Trail continue east to Vivian Park, located approximately 2 miles further up the Provo Canyon. Vivian Park is located at the head of the Great Western Trail (road). Drive up the Great Western Trail about 4 miles south to the Big Springs Park. Park in the last (west most) parking lot. The trail to Cascade Saddle starts from the northwest corner of the parking lot. The trailhead has an elevation of 5130 ft. The distance from the parking lot to the Cascade saddle is just over 5 miles.

The Dry Fork Trail, and the Big Springs Trail intersect at the Cascade Saddle, the first coming from the west, and the second from the east. At the intersection, find a trail marked by cairns running south and generally following the man-made terraces horizontally across the face of Shingle Mill Peak. Within a mile or so the cairns guide you to to the saddle between Shingle Mill and Freedom Peaks. Ascend about 1/2 mile NE (35°) to the peak.

As long as you are there, you may want to summit Freedom Peak as well.

Since the Squaw Peak Trail is closed in the winter, as an alternative one may start at the Rock Canyon Trailhead (elevation 5138). This trail connects with the Dry Fork trailhead after 3.3 miles.

Shingle Mill is located in the Unita National Forest and as such one may camp pretty much anywhere. Use common sense and leave a reasonable distance between camp spots and water sources. On the Cascade Saddle there is a large plastic water collection tank providing water to campers (note the water looks stale and must be purified before drinking).