Timpanogos and its little brother Mahogany 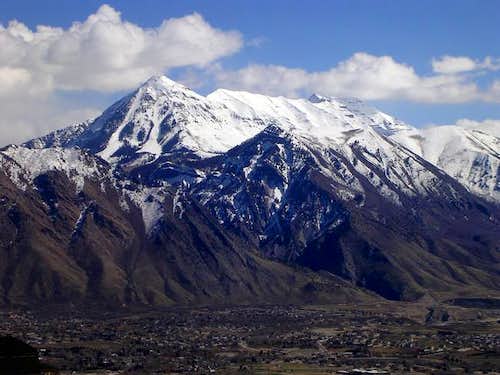 Utah County has some outstanding mountains. Mount Timpanogos, Mt. Nebo, Cascade Mountain, Provo Peak, Spanish Fork Peak are but a few I could mention. See list at the left. It also has an amazing amount of peaks that aren't well known except to the local population which has a chance to gaze at them everyday and often even these folks don't know the names of many of these peaks. Mahogany Mountain is one of those that everyone sees daily but for most, it just doesn't register or cause them to really look at it.

There is a very good reason why. Mahogany Mountain sits in the shadow (so to speak) of a giant mountain, Mount Timpanogos. Your eyes just automatically go to Timpanogos which soars 7000 feet above the valley floor. It is understandable then that it is relatively unknown, even most of the locals don't know its name. When I asked several people what the name of that peak was, their answer was mostly, "what peak?" But since this is the "hill" Jim first learned how to use a compass on, and because he notified me he can die happy if it's on SP, let me introduce you to a neat mountain that is just a hop, skip, and a jump from the spreading suburbia of Pleasant Grove, Mahogany Mountain. 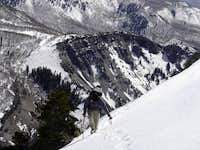 A taste of the good

Mahogany Mountain stands 9001 feet tall and if it were standing separate from Mt. Timpanogos, all by its lonesome somewhere, it would be a very noticed mountain. Interestingly enough, 9000 feet of elevation would make it one of the tallest peaks in Washington and Oregon. Well, at least it would be among the top 35 in each of those states, states that are known for their mountains. Well, actually it'd be the 16th highest peak in Washington and the 31st highest in Oregon and definitely it'd be the highest in Kansas and Nebraska. It is called mahogany because there is a lot of mountain mahogany brush on its slopes. There are also other trees present but mountain mahogany is the most prevalent.

From the top of Mahogany Mountain, you get one of the best views of Mt. Timpanogos to be found anywhere since it only towers 3000 feet above you from Mahogany's summit vantage point. It also has a killer view of the Utah Valley below. Utah Lake is surprisingly large and its full length and breadth can be seen in its entirety from there. Whether there is a benchmark or a register on top, perhaps Jim can provide information on that. We had too much snow at the time of our visit.

Access to the mountain has diminished somewhat as development has spread near its flanks but the forest service has wisely maintained a trail head that gives access to hikers via Grove Creek Canyon. This is the hikers way although you can during the summer take a rough road from near the Timpanooke Campground that would put you near the peak from the eastern side but then that would lessen the value of the hiking potential. (see routes down below) 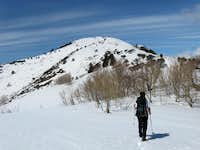 On the broad ridgetop

Using I-15 either from north or south, take the 275 exit onto Pleasant Grove Blvd and follow it as it goes northeast to State Street (US 89). Turn right and follow it a few blocks (it goes from two lanes into one as it approaches a railroad underpass). Watch for 100 E. which is the first left just after the light and turn left (north) onto it. It may also be signed as SR 146.

Within a few blocks you will pass the Pleasant Grove FS Ranger station and you can stop in and pick up information if you like. Not far from the ranger station you will see 500 N. and turn right. Then drive 1.4 miles up to the TH. Note that 500 N. becomes Grove Creek Rd as you drive up it. The TH is paved and has one of the newer type FS vault toilets.

Here is a link to an overview map which will aid you. 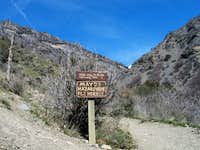 After you find the trailhead via the getting there directions, you will find a paved parking area with a FS vault toilet facility and some picnic tables present. At the east end of the parking lot you will see a gate and a trail sign (with a warning about being hazardous for horses). The trail is a jeep road that goes up the canyon about a third of a mile and where the jeep road dips down to the creek, you will see a trail that continues up to the left. A bit steep at the beginning but after it passes an old fence line, the trail has a very nice grade and and an easy tread. A couple switchbacks will get you to a trail junction, take the one that heads into the canyon. 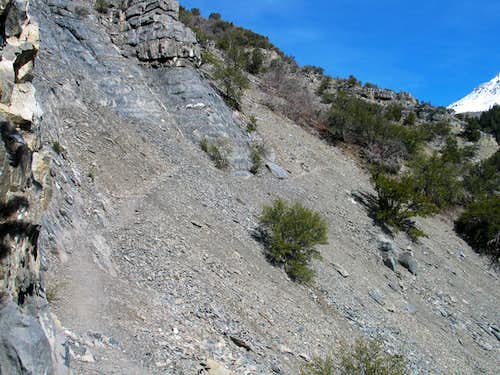 The trail is well made and the kind that is enjoyable. There are a few areas where you will pay close attention to your footwork but overall it is an easy hike up to the bridge that crosses the creek, at about the two mile mark. You will pass a bench sitting next to an outcropping and the bench is a great place to sit and look back at the valley and the canyon below. The bench is a memorial for a person who is being honored and a small plaque and tiny mailbox register is found nearby.

After you cross the creek on a footbridge, the trail continues on, switchbacking up to join the Timpanooke road.

The SouthEast ridge route is now posted (link at the left) 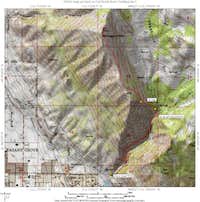 There are several ways to climb (hike) Mahogany Mountain and another possibity
from the west is the SW ridge. Perhaps you can go up from Heisetts Hollow and the west face but that might be now private property. Dean is right, most of my exploration of Mahogany was pre-1995 and involved going out my front door, turning left, and going up. Now there are loads of new development along the bench making the west face a little tougher to access. If you can dodge the townhomes, houses, forclosed mansions, and paved roads, then Heisetts Hollow ridge is a shorter, steeper way up.

From the east, you can take the Grove Creek trail up to the Sagebrush flats area and work your way over to Slate or Broad Hollow. Mike Kelsey mentions this possibility in his book and also talks about using an old hunters road not far from the north ridge of North Peak (of Timpanogos). I'll look at this one myself when I have the chance to get up there again. Jim? Jim here, that road is accessed by heading up American Fork Canyon on SR 92. A good rule of thumb in finding this road is to avoid left hand turns.

Follow the highway (resisting the urge to turn left at North Fork, no matter how much Silver Lake trail is calling you) and continue up until the road hits a T junction. To the left is the Alpine Loop and Provo Canyon, to the right is the Timpanookee campgrounds and Timpanookee trailhead. Turn right, pass the station, and stay on this paved road which transitions to a dirt road. Sadly, you are now roughly in the vicinity of the fatal bear attack last year as you pass various camping areas.

This road wraps NW before heading S along the eastern edge of Sagebrush Flats. It's a beautiful drive, well worth the time it takes. After a while, dirt roads shoot off in all directions, but the main road is well marked. Continue driving as long as you want. You have access to Mahogany, Grove, and Battle Creek Canyons from this road/Sagebrush Flats. I would probably recommend 4x4, but I know more than a few adventurous souls who have taken the family sedan...

Mike Kelsey has some information on Mahogany Mountain in his book:
Climbing and Exploring Utah's Mount Timpanogos. This is how he describes the route from the Timpanooke 4wd road.

Kelsey has the following on an approach from the east:
"When you reach the bottom of the west ridge of North Peak, walk along the road for 500 meters until it makes a hard left turn, then instead of returning south to Grove Creek, locate an old deer hunters road running west from the bend. Walk this old road for about 700-800 meters until you come to a camping place and a barricade erected by the Forest Service. At that point, the road ends but a trail begins.

Continue west on the trail. Not far from the end of the road, the trail ascends a rounded knob and from there you'll have a clear view of the east face of Mahogany. From the knoll, continue west on the same trail. Further along, it seems to fade in places, but if you do lose it, head northwest between two of the peaks on Mahogany Ridge, called Broad Hollow. Still further, you will find a trail but then you''ll have to turn left or south and climb the northern ridge of Mahogany." That'll lead you to the summit. 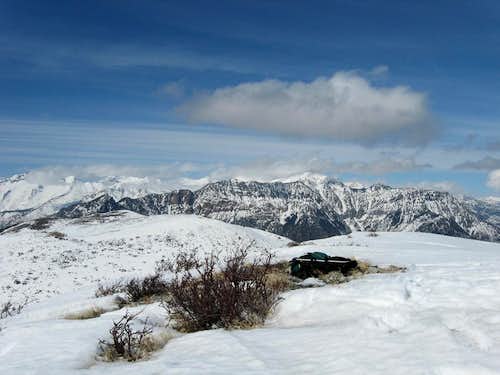 Always a work in progressThis page will still receive some tweaking so it'll still be receiving additional information as routes and updating occurs. It has been reported that skiers have been seen skiing off the summit down Heisett's and you can practice your snowshoeing skills in the winter as well. I've added two others as co-authors of this page
Eric Willhite as he was the one who blazed the way up the SE Ridge with me. Check out Eric's fine trip report and the pictures he took at this
LINK.

JDrake (Jim)as Mahogany Mountain was in his backyard and he has ascended it numerous times from many different ways. It is truly Jim's mountain as he knows it better than anyone.

Nearby prominences of Mahogany Mtn 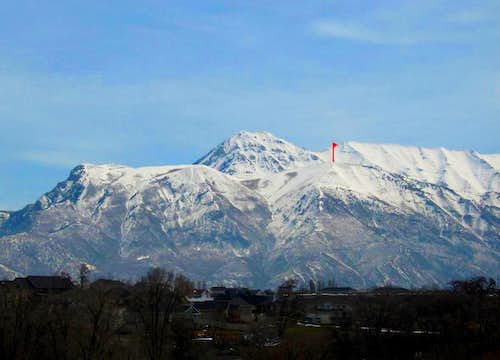 If you look at this picture, you will see two peaks to the left of the main
Mahogany summit. The first one to the left is 8926 feet high and the one on the far left is 8905 feet. It would be reasonable to include both of these
on a visit to Mahogany's main summit.

EJ Bean has put up a nice page for the backside of Mahoghany via Timpanooke campground http://www.wasatchhiker.com/wasatch-trails/mt-mahogany/.

Also HERE for more on the trails in the area that lead up the canyons.