Lonely Spanish Fork Peak sits by itself between the Cascade/Provo Peak massif to the north and the Santaquin Peak/Loafer Mountain massif to the south. Sure, it's 1,500 feet lower than Mount Timpanogos or Mount Nebo, but it still rises 5,500 feet above the valley floor and is higher than any peaks in Weber or Davis Counties to the north.

The most popular route is the trail leading up the Right Fork of Maple Canyon, a well-maintained trail all the way. Another lesser-used (and virtualy derelict) trail leads up Sterling Hollow from the south slopes. Both routes involve well over 4,500 feet of vertical climbing. The Maple Canyon trail is wicked steep and rocky, climbing over 4600 feet in 5.5 miles. The trip is worth it, though, with vistas opening up as you climb past a lake and over the ridge for dramatic views of Utah Valley, Hobble Creek Canyon, and Diamond Fork Canyon.

An alternate same for the mountain is Sierra Bonita (Spanish for "beautiful mountain"), based on the name that Junipero Serra reputedly gave the mountain on his farthest venture north in the 17th Century. This is an historical curiosity, but no one calls it this. 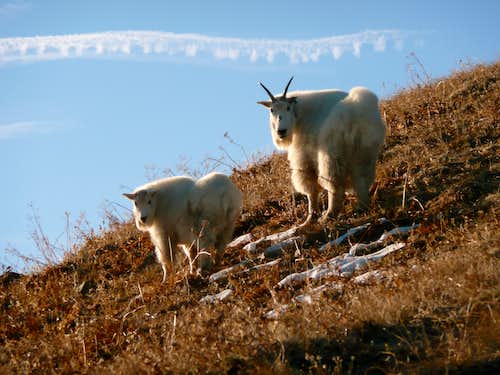 Mountain Goats on the Summit

(Some locals refuse to call this mountain Spanish Fork Peak, instead calling it "Maple Mountain" or "Mapleton Mountain." This seems to be borne out of some simmering rivalry between David (Mapleton) and Goliath (Spanish Fork City). USGS, understandably, sided with Goliath. Best advice for residents of Mapleton (which exists only because it seceded from Springville in the 1910s, with the blessing of the Utah Supreme Court) is to get over it. The name is Spanish Fork Peak.)

Coming from the north or south, take exit 260 and head east towards the mountains on route 77 (also listed as 400 south) for about 1 mile.  Turn right on highway 89 and head south for about 1.5 miles.  Next, turn left (east) on 1200 north and follow this for just over a mile and make a right onto Main Street heading south.  After about 1/2 mile make a left (east) on 400 north - follow this up into Maple Canyon.

No fees. The campground gate closes at about 2200 and doesn't open again until about 0600, so if you forget your cheezits or marshmallows and will need to drive into town for a resupply, be sure you park in the south overflow/group lot outside the gate. The trailhead parking lot is closed to horse trailers from Memorial Day to Labor Day, but outside that window expect parking to be tight, especially during the big game hunting season in October (which, ironically, is some of the best hiking weather of the season. Wear orange). 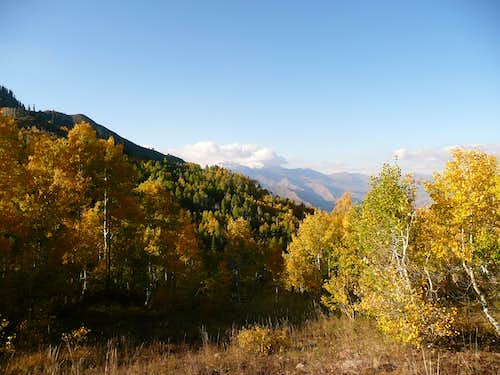 Good camping can be had in Maple Canyon, or at Maple Lake.

Visit www.ksl.com for weather conditions and cameras from the Wasatch mountains.

The directions provided work okay if heading south on I-15. However, going either direction on I-15, it works better to take exit 260 (Springville/Mapleton) then head East to U.S. 89 where you turn right and stay to the far right after turning. The camping sign at Maple Street does not indicate it is for Whiting, but when you turn right (East) onto 400 North a sign does indicate "Whiting Campground". You actually start on Trail 006 for the first quarter mile before crossing a stream, where the 5-mile trail to the peak begins as Trail 007.

It is Spanish fork Peak but..

Getting there, and summit route

When you get to the campground, stay to the left and continue driving through the campground to the end of the paved road where the real trailhead parking is. You'll save a good bit of walking. There is no sign to trailhead parking until you get there, but there is a good lot with bathroom. The trail starts as what appears to be an abandoned gravel road at the top of the TH lot. When you get to the top of the ridge, you will go left (south) to the summit. You will see two trails that start so close together you might think they are really the same trail, but the higher one follows the ridge over the false summit, with good views to the east, while the lower one traverses around the false summit, with good views to the west. The two join up at the low point between the false and true summits. The trail over the false summit is fairly steep and loose. Go one way and come back the other way. Lots of meadows up high that should be gorgeous in July. Lots of aspen forest lower down that should have great fall colors. If you go in early summer and are lucky enough to find stable snow in the upper basin, there is potential for a good glissade. Good hike.