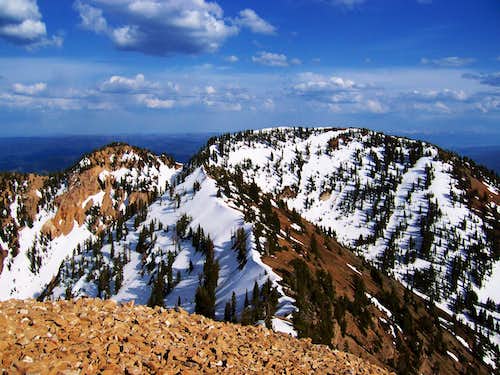 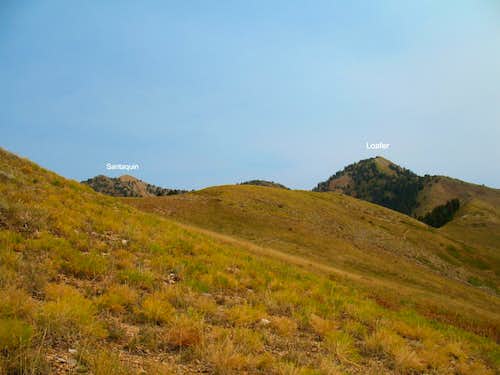 This is the next door neighbor of Santaquin Peak which already has a summitpost page. However, Loafer Mountain is the one of the two that has the most height so thanks to that it gets the prominence and since it is the 44th most prominent peak in the state of Utah, 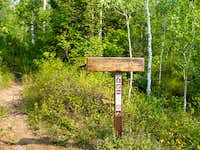 It deserves its own page as it gets a bit confusing to people who are seeking out the summit of Loafer but end up on Santaquin Peak, not realizing that they are not on Loafer Mtn. The confusion comes from the trail signage which is called the Loafer Mountain trail but ends up taking you to the top of Santaquin. This happened to me and I know it has happened to others. The Loafer Mountain trail should actually be called the Santaquin Peak trail since that is really where the trail takes you. There is a trail up Loafer Mountain that branches off of the main trail but unless you have paid attention (GPS and map), you can easily end up on Santaquin Peak (which is very worthwhile to do). Should your heart be set on getting Loafer, then this page is for you. But remember, you really should get both Loafer and Santaquin to consider that you have touched all the bases, prominence wise.

Loafer Mountain has 2920 feet of prominence (see here for defination of prominence)and while it is 2 feet higher than Santaquin Peak, it has been relegated to a lesser known identity since Santaquin is the peak you notice from the valley floor. Again, the intent of this page is not to steal the thunder of an existing page which already exists for Santaquin Peak, it is to aid those who are more interested in Loafer Mountain as their primary objective and hopefully this page will be received in that spirit. I just feel that this mountain needs its own page. I encourage you to also check out and utilize the information on the Santaquin Peak page since you should do both of these peaks on the same hike, pretty much a slam dunk opportunity.

Take I-15 exit 250 into Payson. Drive through town and look for the turn that will take you to Payson Canyon on the Nebo Scenic Loop Road. At about 7600 feet of elevation (I didn't write the miles down) watch for a small parking area on the north side of the road.It is signed as the "Loafer Mountain Trail" and you will know if you've gone too far if you see a turn off for the Payson Lakes area. It is a popular trailhead for mountain bikers and is often full on a nice summer or fall weekend.

This peak is on US national forest land.

For up to date information, call the above ranger station.

Several forest service campgrounds are nearby:

Use this list (HERE)and consider the listing of campgrounds for
Payson (closest to trailhead), Santaquin and Spanish Fork.

Payson, Spanish Fork and Provo have good motel accomodations and there
is a KOA campground in Provo.

The trail routeA fine map along with some nice pictures can be found on Eric Willhite's fine trip report which you can find HERE. My route followed the trail as it went to the left. 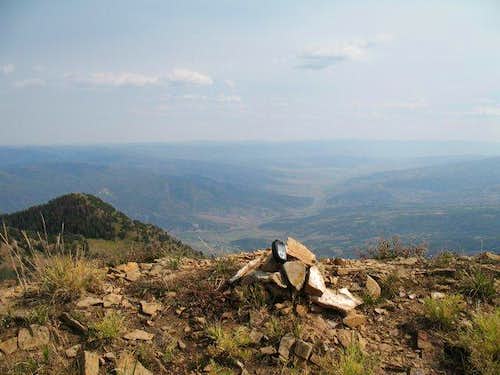 From the trailhead, the trail starts out for an easy mile in the woods before hitting a sign and junction (Bennie Creek). A small corral was present when I was there in 2007. I went left from there, dropping down a bit to another junction where you go right. Follow this trail as it climbs up onto Loafer Mountain Ridge. The trail goes up and then makes a long contour until you hit another junction where you stay on the main trail which heads up the ridge, gaining a couple thousand feet in the three or so miles from where you left the small corral.

Eric mentions another trail (see his map), so it appears there is another option but since I haven't been on that one, I can only relate from my own experience. You will ascend out of the trees on the Loafer Mtn trail and on a hot day, you will want plenty of water (there is none on the mountain) and a good hat. You will reach a saddle (a fire ring was present) that has nice views and at this point, the trail ascends again to reach an area where views of Santaquin Peak and Loafer Mountain will begin to show up.

At yet another saddle, where a trail comes in from the east, you could head uphill to get up Loafer Mountain or you could just leave the trail wherever it looks good and go up. There is a use trail that you can follow but if you miss it, you can just head up. It helps to have the summit of Loafer as a GPS waypoint. A small cairn marks the summit and previous reports I have read indicated that there was once a sign at that point which indicated the summit of Loafer Mountain. I saw no benchmark or register at my visit. To get to Santaquin Peak, at the saddle mentioned earlier, the trail contours around the west side of Loafer Mountain, and heads to yet another saddle which is between Loafer and Santaquin and continues up to Santaquin peak.

Overall: If you just go to Loafer Mountain and back, it would be about 11 miles roundtrip. If you add Santaquin Peak to your effort, plan on an additional mile or so plus additional elevation gain. For just Loafer Mtn alone, plan on around 4000 feet. 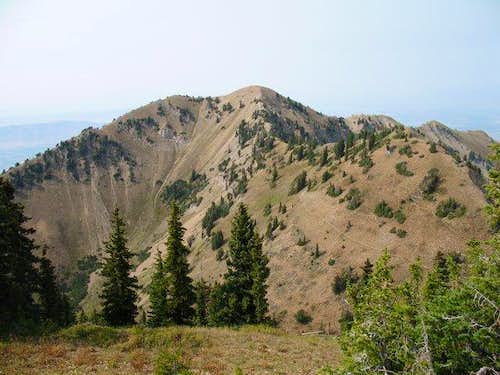