Cascade Mountain just misses the 11,000 foot club, but is still one of the more challenging, and least visited peaks of the major peaks in the Wasatch. Cascade is the next major mountain south of Timpanogos and Provo Canyon and overlooks much of Utah Valley.

The west face is very precipitous with huge cliffs and rises nearly 7000 feet above the valley floor. From the north, the peak resembles a steep alpine horn. From the east, the scenery is similar to the much more well known Timpanogos with many alpine meadows and steep cliffs.

The mountain is viewed by everyone in the Utah Valley and it is very visible and prominent from most places in the valley, although few people take the time to climb the peak.

Cascade Mountain is named for Bridal Veil Falls on the north side of the mountain. At 607 feet, this is the highest year round waterfall in Utah and one of the highest in the United States, though for some strange reason it is often left out of the list of highest waterfalls.

Before 1996, the world's steepest aerial tram used to climb 1753 feet to the top of the cliffs above the falls. On January 1 1996, a monstrous avalanche swept down Cascade Mountain and destroyed the tramway. It was never rebuilt.

Cascade Mountain, along with some other peaks in the Wasatch, is one of the most avalanche prone mountains in the country and huge avalanches can falls thousands of feet before burying Provo Canyon in up to 100 feet of snow. 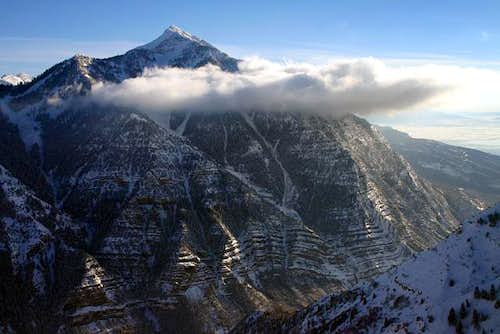 The north side of Cascade Mountain. 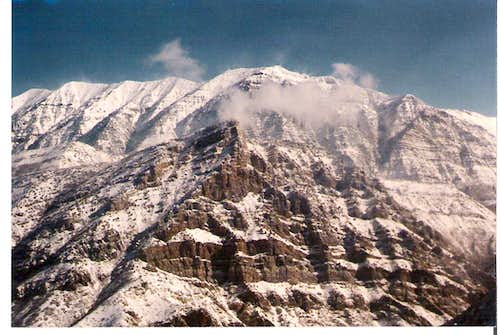 South west side of Cascade Mountain. 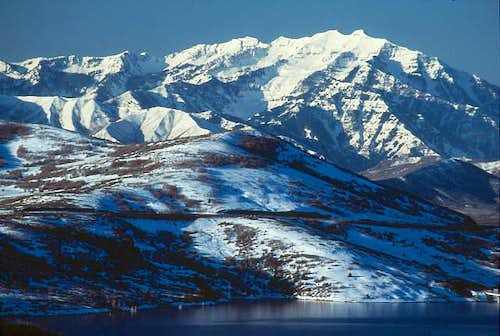 East side of Cascade Mountain.

The main access for all West and South Side routes is from the Squaw Peak Road.

From I-15, take exit 275 to Highway 52, and then Highway 189 to Provo Canyon. Continue east at a split towards Bridal Veil Falls up Provo Canyon. Less than two miles past the mouth of the Provo and just past mile marker 9 is a sharp turn to the right which is the Squaw Peak Road. It is paved for several miles (and some great views), then a rather rough dirt to the Rock Canyon Campground.

It's 9.6 miles from the turn onto Squaw Creek Road to the trailhead. (Ignore the sign that says the campground is 9.5 miles, it is really 9.0.) The Trailhead is 0.5 miles after Rock Canyon Campground. The road past the campground requires is for high clearance vehicles.

The trail is only identified by a brown plastic post saying it is Trail 060. Once you hit the ridge after 3 miles on the trail, the trail to follow is obvious to the left and is marked as Trail 059.

The couloir routes are also accessed from the Squaw Peak road. See the individual route pages for directions. 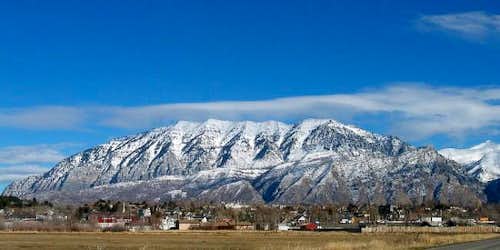 The main access for the east side of Cascade Mountain is from the South Fork Provo River.

From I-15, take exit 275 to Highway 52, and then Highway 189 to Provo Canyon. From the mouth of Provo Canyon, drive 5.9 miles up the canyon to Vivian Park Exit and the road to the South Fork. (Updated directions from SP member marauders). Exit the highway to the right across the bridge and railroad tracks, and continue up the South Fork Road. Follow this paved road for another 3.5 miles to the National Forest Access sign. Turn right into a small parking lot with a park, pavilion, and benches. A small road will continue west for another 100-200 yards to a second parking lot. The trailhead is on the south (left) side of this second parking lot. This is the trailhead for Big Spring Hollow.

If you want the Bunnells Fork Trail and route, follow the directions to Vivian Park and the South Fork Provo River Road. The trailhead is at the South Fork Park Picnic Area near Giles Ranch. 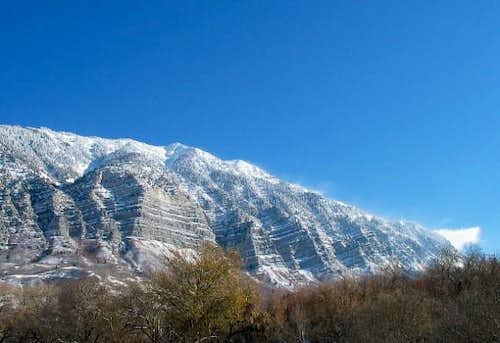 Looking south from the turn off in Provo canyon towards the summit of Cascade Mountain enroute to the trailheads.

There are many routes available up the peak. The main routes are discussed here.

This is perhaps the easiest route on the mountain. The route climbs up the Dry Fork Trail to the saddle. From there the ridge is followed northwest and then north to the summit. There is some class 3 scrambling along the way. There are several intermediate peaks to climb over before reaching the highest summit.

This route is about 12 miles round trip and with about 4000 elevation gain.

The Dry Fork Saddle mentioned above can also be reached from trails from the north such as Big Spring Hollow and Shingle Mill Canyon, but these are longer (but very scenic) routes. 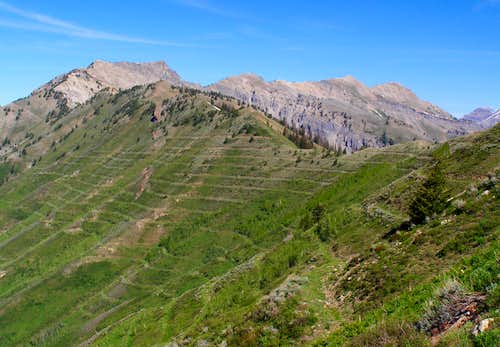 The South Ridge from the Dry Fork Saddle.

These steep gullies are located about one mile north of the Dry Fork/South Ridge Trailhead. They can be used to climb Cascade Mountain, but they are rugged routes. In Spring, they will make an interesting snow and mixed climbs.

The southern-most gully is a viable summer route, I am not sure about the others. 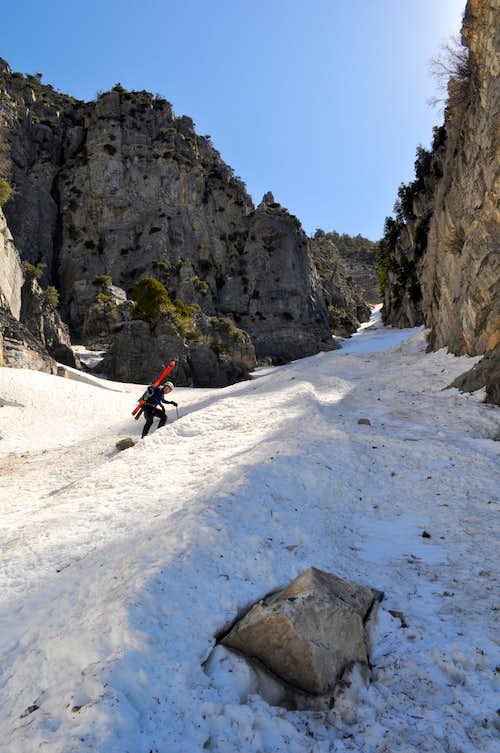 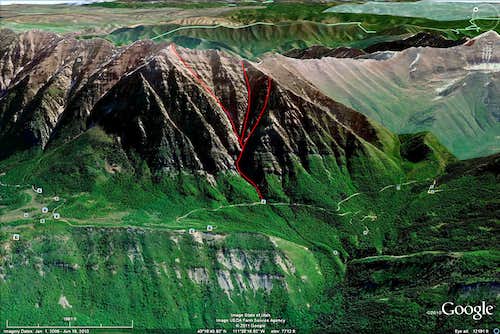 Gully routes on the West and South Sides of Cascade Mountain.

This is the steep gully just northwest of the Crows Foot. It makes an interesting snow climb. 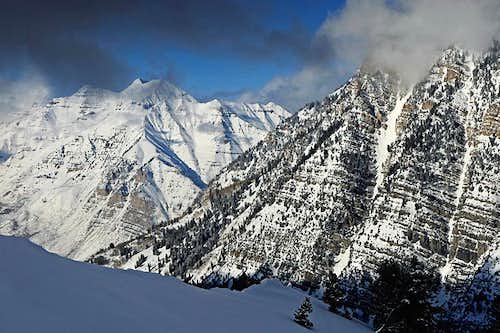 Since the West Face/Quarry/Upper Pole Couloir may be closed, this may be the most expedient route up to the summit of Cascade Mountain. It is a steep route, but there are no major difficulties. The route will be more enjoyable as a spring snow climb. 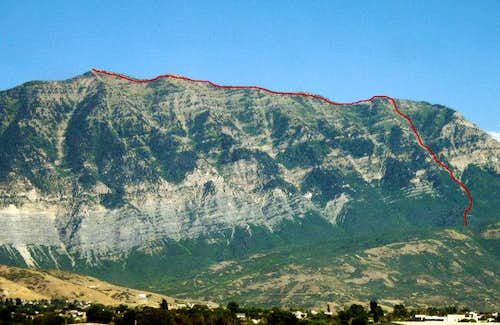 This route was formerly the easiest and fasted route up Cascade Mountain, but the latest rumor is that it has been closed.

Before the Bridal Veil Falls Tramway was wiped out by an avalanche (January 1996), this was one of the fastest ways to climb Cascade Mountain. It is probably almost never used now. When I climbed it in 1992, the route followed a climbers trail from the top of the tramway up the north gully and to a beautiful basin, where it was a steep scramble to the summit ridge.

Now that the tramway is gone, the climb is much more difficult and involves more elevation gain. A rough climbing trail does go to the top of Bridal Veil Falls, so the route is still possible. Deaths have occurred on the route to the top of the falls, so use caution. 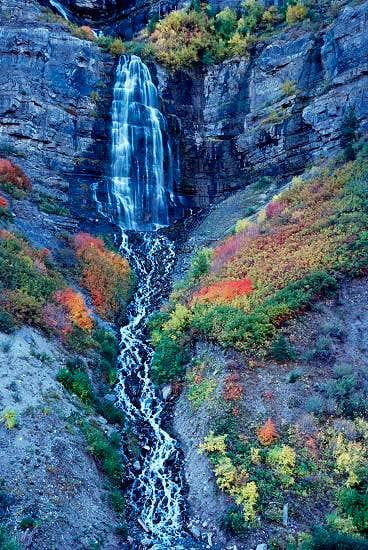 This is a long, steep, and rugged ridge starting from the South Fork of Provo Canyon. It is one of the safer winter routes on the mountain, but is not easy! In addition to the route mentioned on the route page, a variation of the route starts on the spur near Vivian Park.

Expect a long scramble and with some bushwhacking. Most people would want two days for this route, but after the snow melts, there are no water sources. 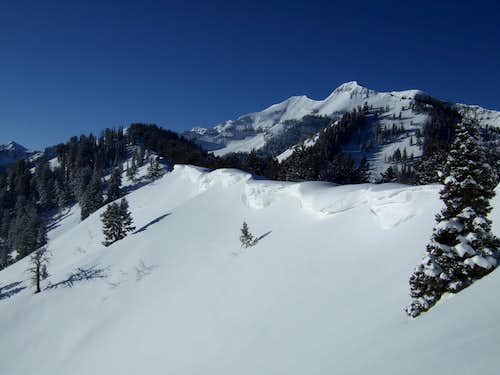 Part of the Northeast Ridge.

I climbed this route on June 10 1989. It is one of the most scenic routes on the mountain, but there is private land at the mouth of Bunnells Fork, where the Giles Ranch was located.

In 1989 and 1997, hikers were allowed to walk the old road into Bunnells Fork and to the old Forest Service Trail. This trail is in several only guidebooks. Apparently, the ranch still allowed access at least as late as 2005. Hopefully, it's still open. If not, use the Big Spring Hollow Route instead.

This is a full day climb.

This vies with Bunnells Fork as being the most scenic route on the mountain. It's one of the longer routes as well.

There is now public access to Big Spring Hollow from near Camp Trefoil. A good trail goes to and up Big Spring Hollow. From the upper basin, one of several routes can be used. The East Ridge, often known as the Bunnells Ridge, and the East Spur are discussed on the route page. In summer, there are other variations as well and you can climb to the summit of the peak from the basin without using these two ridges. 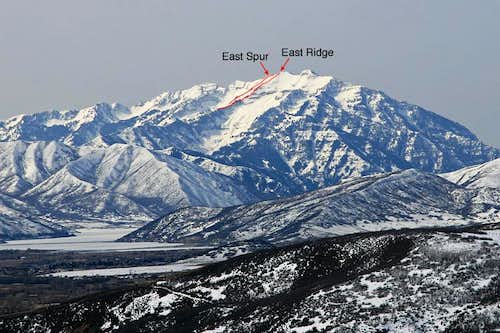 Bridal Veil Falls is a popular ice climb in winter (but watch those avalanches).

The west face of Cascade Mountain has huge towering cliffs that should have some interesting rock routes, though this is limestone rather than granite.

No permits or fees are required, so please take care of the area. 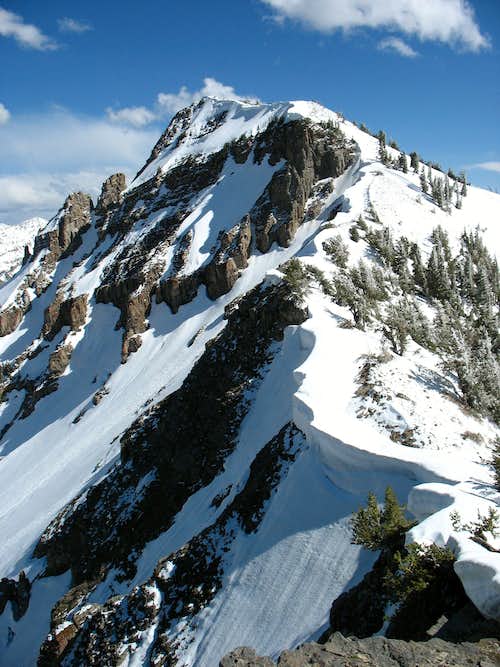 The south summit in late May. Please take care of the area.

This is the most popular time to climb the mountain. Most routes are snow free by then, but some snowbanks usually last through the summer in places.

Early Fall is very colorful on the lower slopes of the mountain, especially on the east side 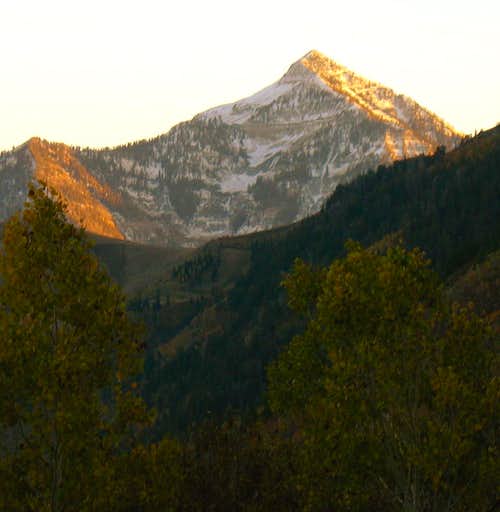 October and early November bring variable conditions to the mountain. Expect anything from summer to winter conditions. 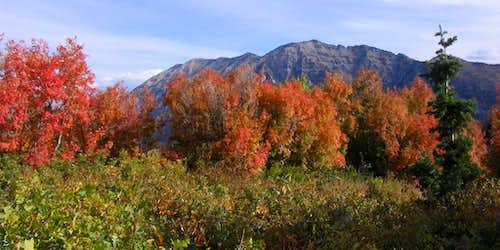 In winter and early spring, Cascade Mountain is probably one of the more risky of the mountains surrounding the Utah Valley. There are no routes that don't cross avalanche slopes or chutes.

The most logical route in winter used to be up the West Face Route, but it can be risky as well, plus rumor has it that access has been closed in recent years. The Northeast Ridge is another possible winter route and one of the safer routes, although it still does carry some risk.

Only climb this mountain in winter or early spring when conditions are stable.

In winter, most people would need a day and a half to two days to climb the peak. 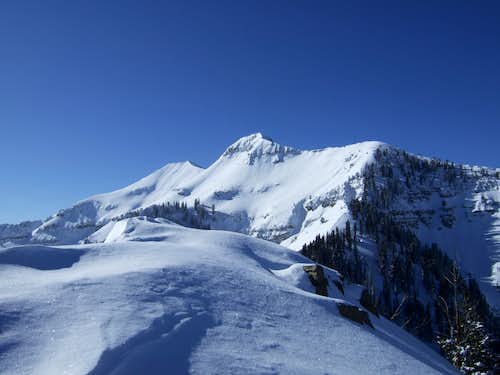 There are actually many good snow routes on the peak and several good couloir climbs as well. Some are outlined in the routes overview. All of these routes require experience and snow climbing equipment. 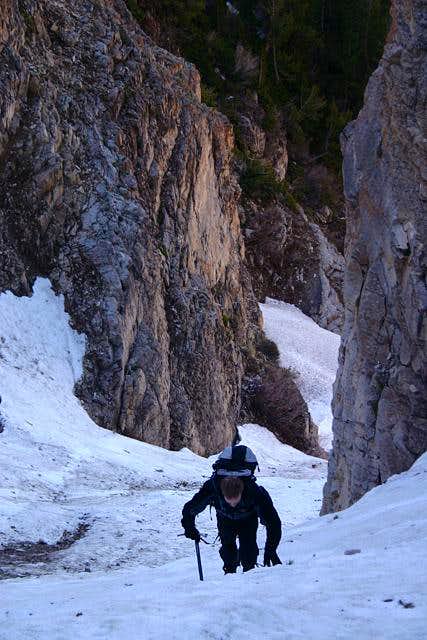 Backcountry camping is allowed, but only the east side routes (namely Bunnells Fork and Big Spring Hollow) have good campsites.

Backcountry camping in the lower canyons, such as Rock Canyon can be good.

Below is the Climate Summary for Mount Baldy, located several miles north. The two mountains are of a similar elevation, so climate conditions should be very similar on either peak.