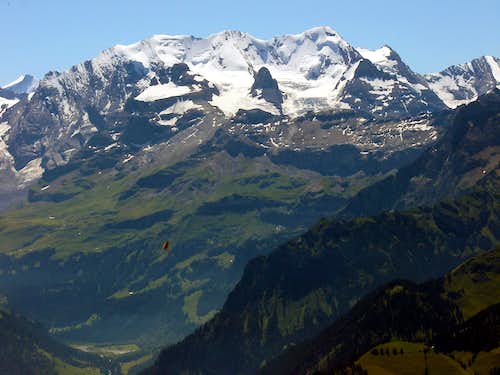 Blüemlisalp Group from the north - peaks on the skyline are L to R Morgenhorn, Wyssi Frau, Blüemlisalphorn, Oeschinenhorn  and Fründenhorn.  Rocky peaks in front are L to R Wilde Frau, Ufem Stock and Blüemlisalp-Rothorn Photo by Andreas Fischer (enlarge for a very large and clear image) 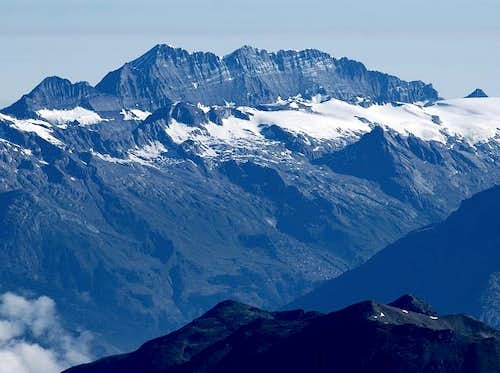 Blümelisalp Group from the south

The Blüemlisalp Group is located in the central Berner Oberland. The SAC defines the group as containing the Fründenhorn, Oeschinenhorn,  Blüemlisalphorn, Weisse (Wyssi) Frau, and Morgenhorn. The lesser summits of the Wildi Frau, Blümlisalp Rothorn, and Ufem Stock are also included. Most routes are on the snow and ice of the north side. The south side of the main peaks are not usually climbed because of the very poor rock. The classic high alpine traverse of the three major peaks (Morgenhorn, Wyssi Frau, & Blüemlisalphorn) is one of the best in the Alps. The portion of the ridge between the Weisse (Wyssi) Frau and Blümlisalphorn has been described as of a higher standard and more demanding than the famous Rochefort Arete in the Mt. Blanc Massif or the Liskamm traverse in the Pennine Alps. The traverse as well as the north faces of Blüemlisalphorn and Wyssi Frau are included in BERNER OBERLAND Die 100 schönsten Touren by Hans Grossen with Gaston Rébuffat. Blüemlisalp, Wyssi Frau, and Wildi Frau are the Swiss spelling, Blümlisalp, Weisse Frau, and Wilde Frau the German.

This is a listing of the peaks and some of their routes.  See the individual peak and route pages for details. 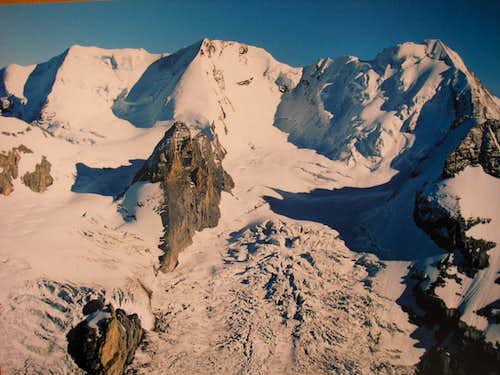 Blüemlisalp Group from the N L to R are Morgenhorn, Wyssi Frau, and Blüemlisalphorn.  Ufem Stock is the rock peak in front of Wiesse Frau.

MORGENHORN – NW Ridge. This PD route starts at the Blümlisalphütte and ascends the Morgenhorn Glacier to the NW Ridge which is then climbed directly in about 3.5 hours from the hut.   WYSSI (WEISSE) FRAU – Ridge from Morgenhorn- PD+ and takes one to two hours depending on conditions. North Face – 300 m – ice to 55 degrees, two to three hours Northwest Ridge – AD - steep snow and / or ice with perhaps a bit or rock at the top BLÜEMLISALPHORN (BLÜMLISALPHORN)– Ridge from Wyssi Frau - AD  two to four hours depending on conditions. North Face - 460 m – ice from 45 to 70 degrees – three to five hours. NW Ridge – PD  Considered the normal route, and the most common descent route. The ridge is straight forward, but caution is advised on the down sloping limestone slabs near its base. These are very treacherous when snow covered and/or icy. Morgenhorn – Blüemlisalphorn Traverse - AD - a long day.  One of the classic high routes in the Alps. 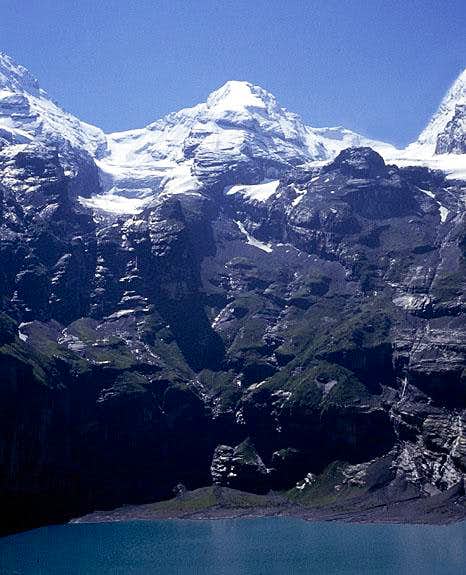 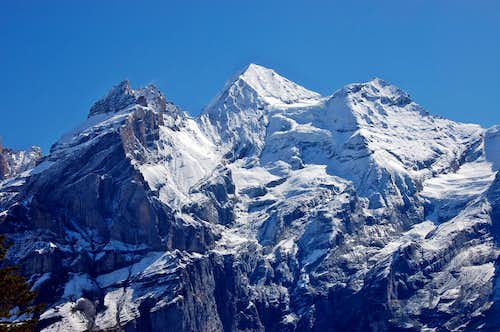 Climbs on the north side of the group are approached from the Blümlisalp Hut which can be reached from either Griesalp or more commonly from Kandersteg. 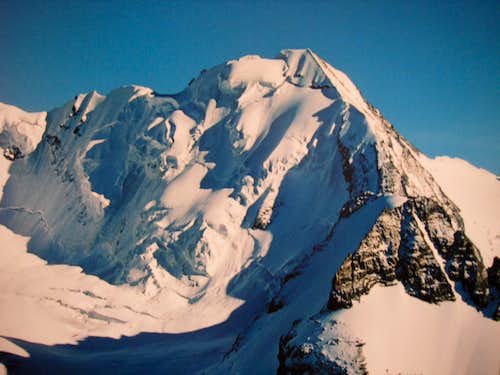 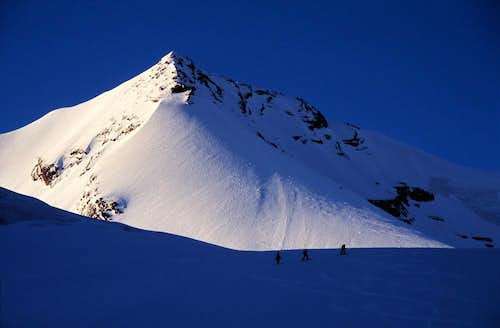 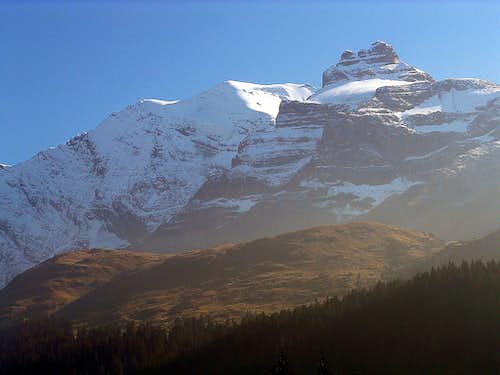 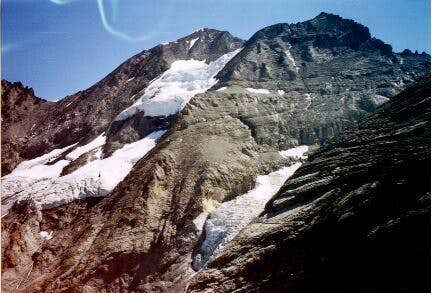 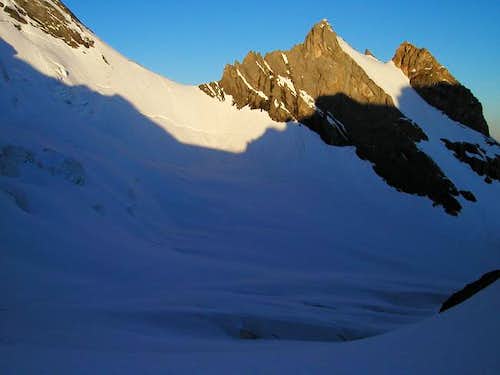 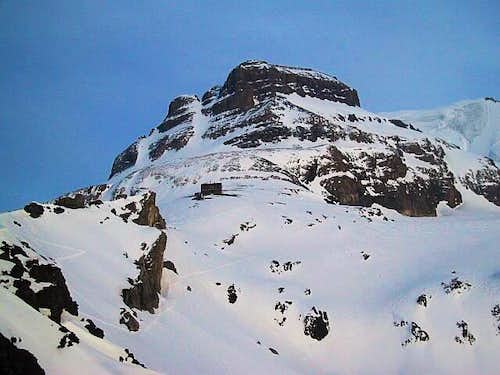 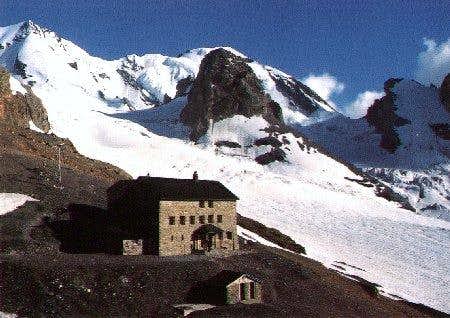