The Engelhörner is an extensive limestone range about 4 km. long situated at the Northern end of the Bernese Alps, near Meringen. It is situated between two main valleys: the Reichenbachtal to the NW and the Urbachtal to the SE and includes several limestone peaks much appreciated by the rock climbers. The highest peaks are Gstellihorn 2854 m,  Grosse Engelhorn 2782 m, Urbachsengelhorn  2767 m and Hohjegiburg  2639 m.  Usually within a massif the mountaineers head towards the highest peak, here the Gstellihorn with its 2854 m. as told, but this is not the case with the Engelhoerner. Small is beautiful, so climbers prefer the Rosenlauistock 2198 m, the Kingspitz, Simmelistock, Mittelgruppe, etc. They are the Dolomites of the Bernese Oberland with excellent quality of limestone, a huge choice of easy and difficult routes, most of them very steep.
This massif can hardly be seen from far, since it is hidden behind several higher mountains like Wetterhorn and Wildgerst.  But no vie ferrate, i.e. the mountain are still in its natural state without artificial features, such as fixed ropes.

The particular stratification of the Cretaceous limestone that forms the Engelhörner chain gives to the summits a peculiar appearance, sometimes with a bit bizarre shapes. They are all easy to access, either in one day from Lucerne or Berne, from the Engelhorn Hut or from the nearby hotel Rosenlaui and many other accommodations. Practically all climbs are made from the West side (Rosenlaui), although certain routes start from the Dossenhut and from the East side (Gastern valley). It is not unusual to climb several peaks on the same day. There is hardly any peak that is suited for hikes or skis, even the easiest route requires good climbing boots and a rope. But you do not have to bother with glaciers and the weather is not mean, sudden changes are rare. No water, so take a large bottle of tea with you! Within the Engelhoerner is a tiny valley, called Ochsental, looking to the west.

The closest town is Meringen 600 m an important tourist center (railroad). From Meiringen a road (there is a bus in summer) leads to Rosenlaui. If you drive by car, follow the main road to Innertkirchen (Susten and Grimsel pass road) for 2 km, at the gas station turn sharp to the right and follow the sometimes narrow road to Rosenlaui.  Follow this road up the valley until Gschwantenmad. Here there are two possible approaches to the chain, depending on which area you are heading to or if you want staying at the Engerlhoerner hut.

- if you want to stay overnight at the hut or climb near this refuge (routes on Kingspitze,  Klein Simelistock, Gross Simelistock, Simelistöcken) you must turn to left there, cross a bridge and follow an unpaved private toll road for many kilometers to reach a parking lot nearby an alp. This is the shortest approach to the hut. After having parked the car, walk up to the alp to pay the fee (CHF 15). The walk to the refuge begins behind the alp and it takes about 1 hour to reach the Engelhoerner hut. From the hut, the approach times are generally short. Starting point for many climbs is the tiny/B, a valley surrounded by perpendicular walls on north, east and south. You can reach it in 15 minutes from the Engelhorn hut.  You can stay overnight at the refuge, or alternatively you can walk in and out if you have chosen a route not too long.

- the second approach (longer) is from Rosenlaui (routes on the Tannenspitze or Rosenlauistock). Once reached Gschwantenmad continue driving up the main valley until you reach Rosenlaui, where it's located the Rosenlaui Hotel. Free parking 50 m above the hotel. Here it start the path to the Engelhorn hut and another to the Dossen hut. Follow the marked trail (white and red marks) towards the Engelhoerner hut. Break from this trail undearneath the Rosenlauistock to access the routes there.  At 1485 m the path to the Engelhorn hut and the one to the Dossen Hut meet and go zigzag through the forest to about 1700 m where it separates again. Go to the right if you choose the Dossen hut, go left for the Engelhorn hut. About 1.5 hours from Rosenlaui.

It is also possible to start the hike from the Meiringen railroad station. Yellow signs show you the way on a foot path that leads past the Reichenbach falls, the place where Sherlock Holmes disappeared. The novelist Sir Arthur Conan Doyle chose the Reichenbach falls as the setting for the death of his character Sherlock Holmes. In The Final Problem (1891), Conan Doyle wrote of Reichenbach: it is, indeed, a fearful place. The torrent, swollen by the melting snow, plunges into a tremendous abyss, from which the spray rolls up like the smoke from a burning house. The shaft into which the river hurls itself is an immense chasm, lined by glistening coal-black rock, and narrowing into a creaming, boiling pit of incalculable depth, which brims over and shoots the stream onward over its jagged lip. You do not need to go as far as Rosenlaui; at Kaltenbrunnensaege (restaurant) a steep and direct path leads to the Engelhorn hut. Ca. 4 hours. Shorter variation: take the local bus and then the cable car to the Reichenbach falls.

No particular restrictions in climbing and hiking. The road to Rychenbachalp to approach the Engelhorn Hut involves the payment of a toll (CHF 15)

Hut and other accomodation 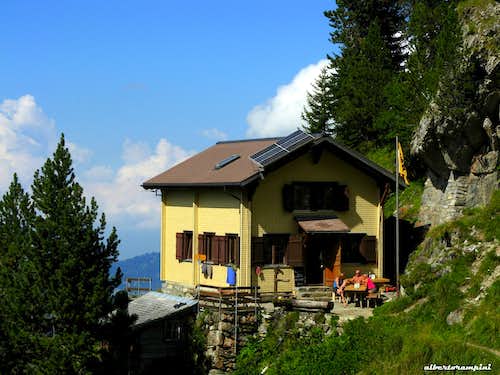 The first Engelhorn hut was built in the Ochsental in the year 1912 by the Academic Alpine Club Berne, since this lonesome and creekless valley is the starting point for the majority of the climbs. An avalanche destroyed this hut and the present accomodation is surrounded by trees at the foot of the Simelistock, 15 minutes below the Ochsen Valley.

The Engelhornhütte lies at the northeastern end of the Ochsental above the Reichenbachtal. It's a
great starting point to climb in the Engelhörner:

The best season is summer

There are different guidebooks covering the area. The modern: