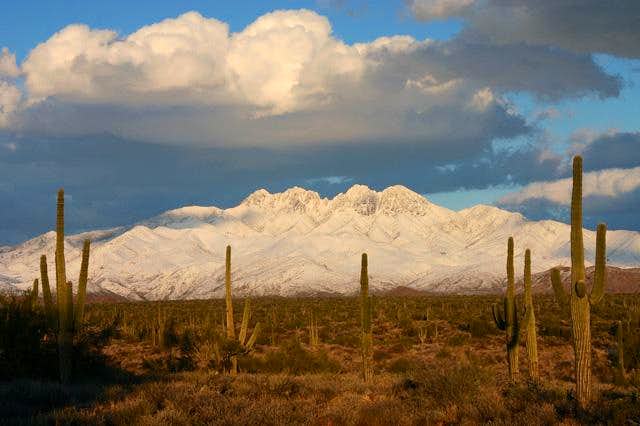 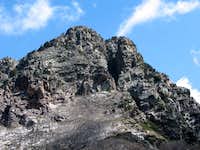 Browns Peak and the "Scree Chute"

Browns Peak is the highest of the Four Peaks and Maricopa County. They reside about 60 miles northeast of Phoenix. The Four Peaks rise dramatically out of the desert ascending about 5,000 feet from the desert floor. On a clear day they can be seen from downtown Phoenix. From the east they look unclimbable without rope. Even though they are a 10-18 mile drive on rough dirt roads they are visited quite frequently. This is the premier climb in the Phoenix area. It consists of both easy trail and class 3 scrambling up a scree filled collier.

The other 3 peaks seen from Browns Peak

Some people have even done the four peaks traverse, which is a class 4 climb over all four peaks and is over 10 miles. The other 3 peaks are far more treacherous than Browns Peak. They require a lot of route finding and rock climbing/scrambling. There are a few more technical moves that would be easy class 5. If the wrong route is taken there are quite a few areas that are class 5 that are unavoidable. In a few areas it is quite a bushwhack up steep loose fertile soil. Dislodging rocks is a big hazard on these mountains. Then there are the cactus and agave plants. This adds to the difficulty of the climb. Small cactus hiding in the rocks in really good hand holds just waiting to prick somebody. These are some of the most difficult mountains to climb around Phoenix that don't require ropes. If you’re not experienced in rock climbing this can be a very scary traverse. The exposure is extreme much of the way.

From the top the view is truly amazing. One can see about 1/4th of the state of Arizona from the top. On a clear day Humphreys Peak can be seen.

In the Four Peaks Wilderness there is all sorts of wildlife. It has the densest black bear population in the state. It also has ring-tailed cats, skunks, coyotes, deer, javelinas, and mountain lions.

The Four Peaks are the only place in Maricopa County that can get considerable amount of snow. It’s also the only place that offers a snow climb to the top of a mountain even though its not recommended.

If you’re coming from North Phoenix take loop 101 east to Shea Blvd. Turn east on Shea and take it all the way till it ends at SR 87 (Beeline Hwy.). Turn northeast and keep going till you see the well-marked Four Peaks turnoff. Take FR143 18 miles to Browns Peak trail. There is one unmarked fork in the road on the way, stay to the left. The second fork is once you get to the ridge. Take a right and the road follows the ridge line to the trail head. Expect to take over an hour to reach the trail head on FR143. If the road is really rutted out it can take two hours. A high clearance vehicle is recommended. It can be 18 miles of pure hell in a car.

If your coming from South Phoenix, Tempe, Mesa or near Chandler, to get to FR143 take Loop 202 East to Country Club. Head North East on the Beeline (SR 87).

If you’re hiking to the top of Browns Peak there is no Red tape. There is an area on the Four Peaks that is on private property and are off limits. If you keep hiking along the Amethyst trail you'll end up at a locked gate, which is the boundary to the Amethyst Mine. From what I understand, it is easy to bypass, but it is private property. The Amethyst Mine has some of the best Manganese tinted quartz in the world.

Browns peak can be hiked any time of the year. If there is snow in the Scree Chute then it is not recommended. It can be done if there is not much snow in it.
The summer months might be too hot to consider. There is very little shade on this hike. The monsoon seasons can be bad if it rains. There is no protection from lightning from Browns Saddle to the top.
There are no web sights that tell what the whether conditions are like. It’s all guesswork.

Camping is allowed anywhere along FR143. Depending when you camp depends if there is water in the washes. Never count on there being water, so bring your own. There are no fees to camp

There is no information on the web on hiking Browns peak. There are also no phone numbers.
The four Peaks rise 6,000 feet from the desert and the weather on top is drastically different than any towns on the bottom. It can be hot on the bottom on very cold on top.

It is actually about a 20 mile drive from Highway 88 to the trailhead, almost entirely on a very rough dirt road. While ordinary passenger cars freuently make the drive, it's a bone-jarring 1-2 hour ride best made in a high clearance vehicle.

The highwat to take from the East Valley area is the 101, not the 102. Country Club Drive turns into 87, the Beeline Expressway. Four Peaks Road is now well marked, and leaves the highway on the right just before 87 climbs a hill through a granite boulder field.

It's not recommended that you plan to hike Four Peaks in Summer unless you can afford significant time waiting for good weather. From early July to mid- or late September (Monsoon season) there can be severe thunderstorms locked over the peaks every day, and showers and downpours that will turn the long dirt/rock road into slick-as-ice mud. There are periods during monsoon season that are dry and would be safe to hike, but if the dewpoint is anywhere above 45-50 degrees, don't risk a trip to Four Peaks!

I've been dying to get out in the mountains for the last two months, and I finally had a day off. I went out to Four Peaks early this morning (June 4, 2005) and the access roads were closed for "extreme fire danger." I talked with the Forest Service and they said that due to excess vegetation from the heavy rains this year, the entire wilderness area could easily be closed until Thanksgiving. Just make sure and check with the Forest Service before you make the trek out there! Best of luck.

There is more than enough information on this post, as well as others online, about the trail itself and directions on how to get there. I will be concentrating on the road you need to take to get to the trailhead. The road is pure hell. Once you turn off from 87 the road seems to be okay for about 1/2 mile to a mile, this give you the impression that huh, maybe it's not so bad. Wrong! After the initial stretch it gets progressively worse. When people say that you need a high clearance vehicle, what they really should say is that unless you have an ATV or a truck with 3-6 inch lift with off-road suspension, most like you will be going 5-10 miles an hour tops. This is due to the fact that you have to keep on dodging the big rocks protruding from the road, sometimes 12 inch or higher off the surface. You will also need to keep on switching the side of the road you are driving because of constant maneuvering between rocks, dips and humps in the road, and other obstacles. We took our minivan, the vehicle with higher clearance of the two we have, and we ended up scratching the side of the van (it can be buffed out but still), scraped the bottom of the front bumper pretty badly, the bumper came off it’s clips in a couple of different places, and scrapped the bottom of the van a couple of time. Also keep an eye out for wildlife if you are really early in the morning, like we did, we were in the area by 5:45 a.m and it was still dark, we almost ran over two bucks. All said, the hike is very enjoyable and is well worth the travel , make sure to come early in the day.