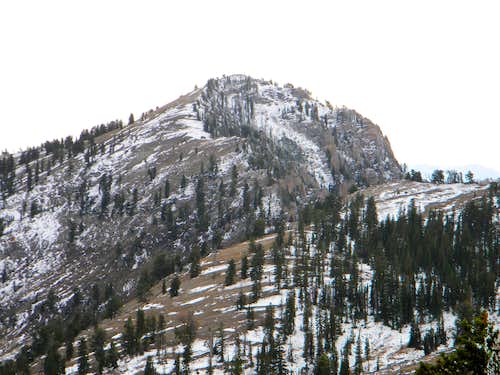 Bullen Hole Peak from the northeast 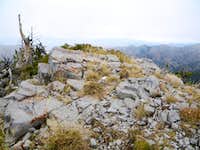 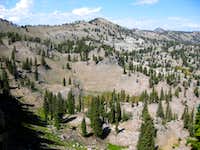 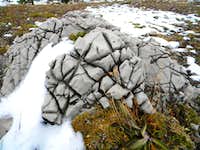 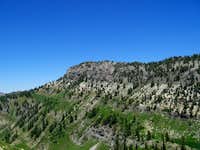 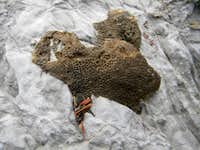 Some sort of fossil

Bullen Hole Peak is the third highest summit in the Bear River Range of extreme northeast Utah into southeast Idaho, west of Bear Lake. According to Mountaingazelle’s Bear River Range page, it is also known as Ezekiel Peak in religous reference to nearby Gog and Magog. Though it is one of the highest summits in the range, it is formed by a fairly non-descript ridge point and the unofficial name is not found maps. Because of these reasons and the close proximity to other more well known named landmarks, Bullen Hole Peak is often passed by. The 9,828 foot summit has a prominence of 368 feet with a connecting ridge to Naomi Peak. Bullen Hole is situated on the main crest of the Bear River Range, about three miles north of Naomi Peak and about two miles west of Mount Gog. The relatively gentle east slopes fall off into hanging basins that form the headwaters of White Pine Creek, while the more rugged west slopes fall off into the Bullen Hole and South Fork of High Creek. The relief is less than 1,500 feet to the east, but the drop to the west is 2,500 to 3,000 feet. There are two adjacent lakes, High Lake is 1,000 feet below the summit to the south-southwest and White Pine Lake sits in a broad basin to the southwest 1,500 feet below. The mountain is composed of dolomite over quartzite formed from ancient tidal mud and coastal beaches. There are a handful of small caves in the area and occasional fossils can be found. The upper subalpine slopes are near the climatic timberline for the area and support open forests of limber pine, whitebark pine, subalpine fir and spruce, with occasional Douglas fir. The area is included in the Naomi Peak Wilderness, which unfortunately can be overrun with cows parts of the year. In the fall, the trailhead areas are heavily hunted so wear orange. 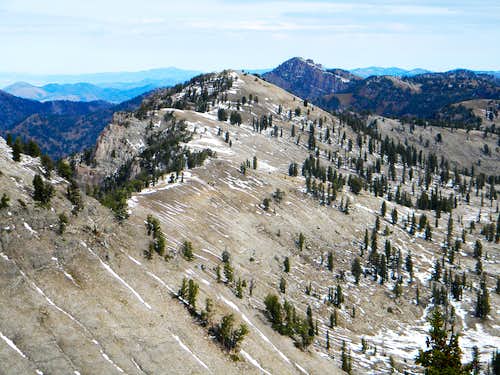 Looking north on the ridge near Naomi. 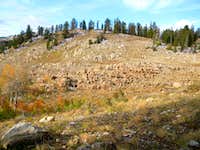 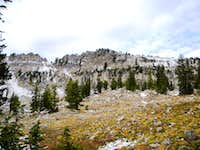 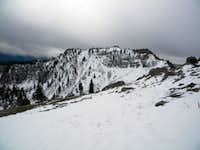 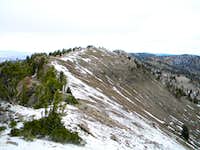 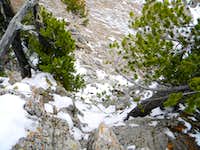 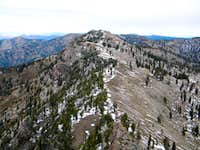 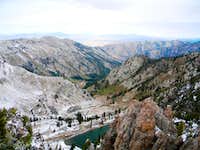 View NW from the crest 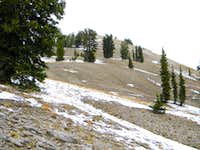 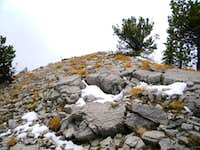 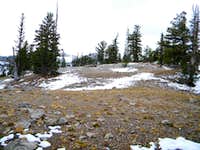 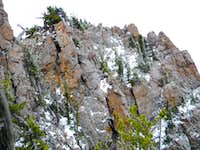 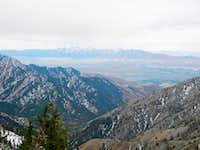 View west from the crest

The easiest routes to this summit start at Tony Grove Lake. To reach the trailhead at Tony Grove from Logan, Utah, head east up Logan Canyon. The directions start on main street in Logan, then turn east on 400 North. Follow the signs for Logan Canyon, Bear Lake and Highway 89. 400 North becomes Highway 89 and gives a beautiful drive up the twisting, narrow Logan Canyon. After driving for about 19 miles look for the turn off to Tony Grove, which is well signed. Take the turn and proceed seven miles to the end of the road and trailhead at Tony Grove Lake. From this trailhead there are two basic ways to go; either to the Naomi Peak area or towards White Pine Lake, both of which are well signed. First, one can follow the trail to Naomi Peak, then head north on the main ridge to Bullen Hole. If taking this route it may be best to drop down into the basin above White Pine Lake, then proceed north on the relatively flat bottom to the base of Bullen Hole. Then its an easy 600-800 foot hike up a relatively gentle slope to the summit. A more difficult, option from the Naomi vicinity is to stay directly on the ridge all the way to Bullen Hole from Naomi. This starts off easy enough, but there are some difficult rocks to maneuver, especially down from the 9,800 foot portion of the ridge southwest of High Lake. If attempting this stay just to the east side of the crest because the west is impassable. Initially one can drop off to the basin below, but soon a band of rock will cut that off so the ridge must be negotiated to get down. At the crux one must chose the more open and exposed slope to the northeast or the steeper, but blocky, tree supporting slope on the main ridge to get to the gentle slope below. The former has smaller stair-like rock steps, but these can be loose and there is less protection if one slips. The main ridge is formed of larger rocks that allow one to hop down, while better supporting with the arms. There are also more significant trees growing out of the cracks to offer some hand holds and support. Either way can be done without much difficulty if one takes their time, is cautious and has good boots. It’s not easy, but it’s not overly difficult if care is taken. Once below this steep ridge section, the rounded ridge line rises gently to the summit. Another option from the Tony Grove trailhead is to hike to White Pine Lake, then ascend through the cliff band at the head of the lake to the base of the summit. Most of the cliff band is impassable, but if one heads for the saddle between Bullen Hole and Mount Gog, there are passages through. Once through the cliffs, simply head up the southeast slope of Bullen Hole. This may be the easiest way to the summit. A variation would be to head north, before reaching White Pine Lake and go around the east side of Mount Gog and climb to the north ridge or the basin separating Bullen Hole and Mount Gog and hike the summit from the north. Trails are sparse to non-existent in this area, but isolation and the wild setting is high. Routes from the west involve longer extended hikes from the Cherry Creek or High Creek basins. Follow these to the High Lake vicinity and ascend the ridge to the divide. The west slope is rugged here so plan carefully. If desired, the trail can be taken from High Lake to the ridgeline north of Naomi Peak, and then the south approach routes offered above can be taken. 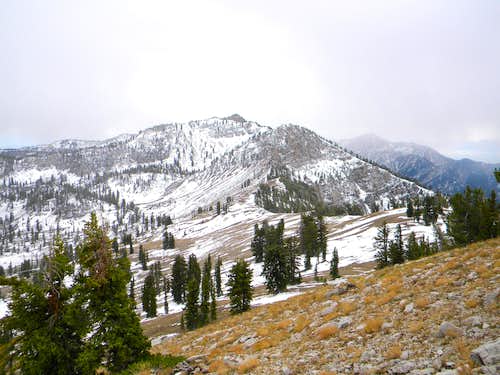 Naomi Peak and the connecting ridge from Bullen Hole Peak

Standard wilderness regulations apply. There is also a $6 fee to park at the Tony Grove trailhead during summer months. 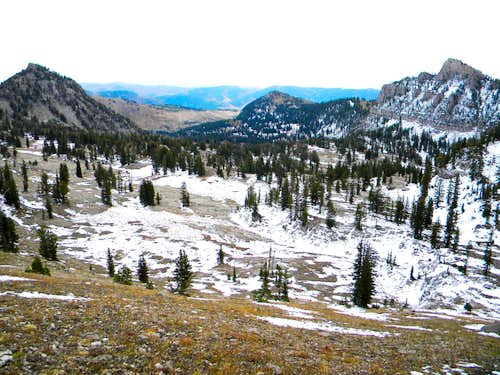 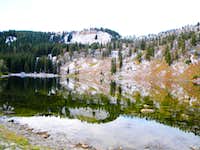 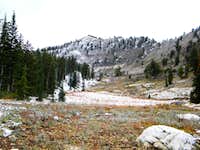 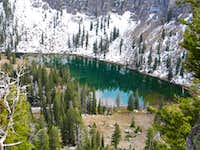 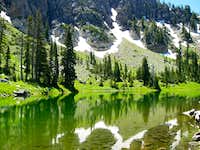 There are several excellent camping opportunities in the vicinity of this mountain. For those wishing to camp out of a car, there is Tony Grove Campground at Tony Grove Lake near the trailhead. This is a large campground easily reached from Logan on a paved road. Thus it can fill up frequently in the summer so reservations may be advisable. There is no drinking water, but toilets are available. Tony Grove offers a nice lake with a nature trail, fishing and several opportunities for day hikes of any length or difficulty. Backpackers can find good camping at White Pine Lake or High Creek Lake. White Pine Lake can get crowded and this is being managed by signs indicating designated camping and non-camping areas near the lake. This lake is about a four mile hike from Tony Grove. High Creek Lake is close to all the peaks, but rugged terrain on the west side of the divide makes it less accessible to them. The basin above White Pine Lake or the basins north or west of Mount Gog offer more remote and isolated camping opportunities. There are several streams and springs that offer water in most of these areas except perhaps late in the drier summers when water may be limited to lakes and the main streams. 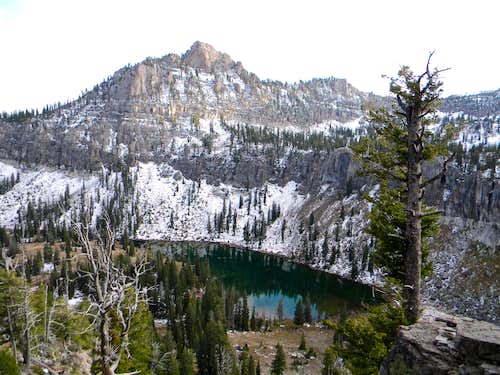 The summer is the best time to climb this mountain. Winter access is possible, but would require a long approach on snowshoes. Snowmobiles can actually enter the Tony Grove area and one can do this, and then have a more limited hike in the adjacent peaks. Getting on the summits adjacent the trailhead wouldn’t be very difficult, but getting over the ridges to Bullen Hole would be much more difficult. Standard hiking is possible late in the fall until the first heavy snows, generally in late October or early November. If hiking this time of year pay attention to the weather forecasts and remember that the days are short. 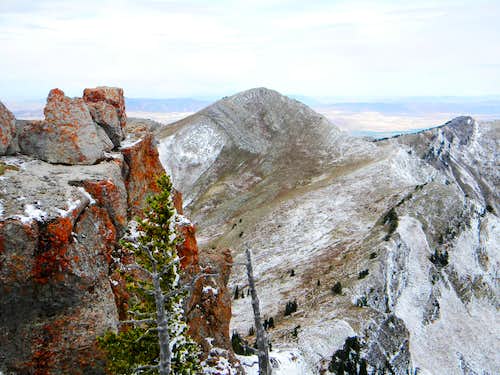 Cherry Peak from the divide.

During the summer weather is generally good in these mountains, but always watch the weather forecasts and be aware that summer afternoon storms frequently can blow up with little warning. Nights can be very cold despite the days being quite warm. Always when entering high mountains be prepared for a wide array of warm or cold conditions. The mountain is located on the Logan Ranger District within the Wasatch-Cache National Forest. Logan Ranger District 1500 East Highway 89 Logan, UT 84321 (435) 755-3620 NOAA Forecast 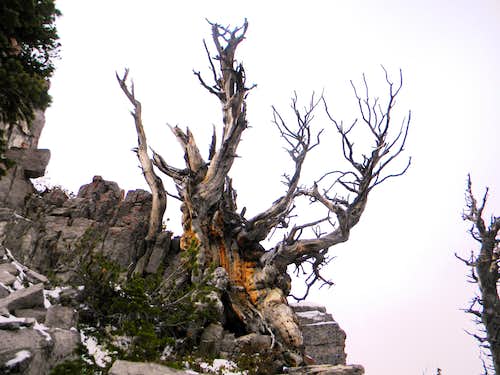 Wild snag on the ridge south of Bullen Hole