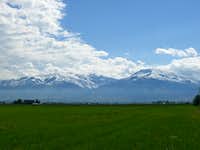 Logan Peak is one of the most interesting mountains in the Bear River Range because the greatest concentration of high peaks lie inside or near the Mount Naomi Wilderness Area. This peak, however, is south of this high concentraion of mountains and is well outside of the wilderness area. At 9710 ft. it is the highest point south of Logan Canyon in the Bear River Range. There are few peaks that go above 9000 ft. in the southern Bear River Range and none, excepting Logan Peak, that go above 9700. Only one other peak (Providence Peak) even goes above 9500 ft. and that peak is really part of a ridge on the same mountain.

Logan Peak is more commonly called Mount Logan by Cache Valley residents.
Mount Logan is the mountain with the 39th highest prominence in Utah and is quite easy to access. It is the only mountain in the Bear River Range to which a road runs to the top. This is because the summit houses a telecommunications tower so the road is an access road. It is not maintained in winter. In these months it is a popular desination for snowmobilers.

Other Peaks on Mount Logan

Mount Logan is a massive mountain and has several different ridges an summits. The true summit is Logan Peak but there are also a few other summits worth mentioning. 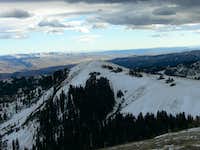 Providence Peak is a highpoint along the south ridge of Mount Logan about 1/4 mile away from Logan Peak. The road leading to Logan Peak crosses over its summit as it heads towards Logan Peak's communication tower. Providence Lake sits below its east face. This peak would be easy to climb from the summit of Logan Peak as there is really not that much elevation gain/loss between the two. It is very close as well. 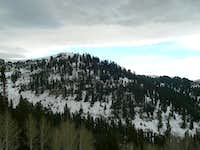 Little Baldy is part of the south wall of Dry Canyon (west ridge of Mount Logan). It looks like the highest point of Mount Logan from some angles and has the shape of a bald cone that is easily identified from Cache Valley. It is about a mile west of Logan Peak and would most easily be climbed from there. 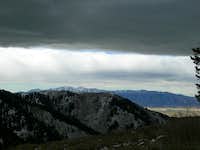 Temple Baldy is farther west than Little Baldy and could be climbed from either Dry Canyon or along the west ridge in conjunction with Little Baldy.

This is how the name Logan came to be associated with this area of Cache Valley and Mount Logan:

The Logan River was originally named the Little Bear by a French-Canadian trapper named Michael Bourdon who discovered it. Five years later he was killed by the Blackfeet in Idaho and the river was renamed the Bourdon River in honor of him. That name was only in usage a little more than 3 years until it was renamed the Logan River after another trapper, Ephraim Logan. In the fall of 1827 Logan was sent with 3 others from the main party of the Rocky Mountain Fur Company in Cache Valley, to trap on the Snake River near Twin Falls, Idaho. All 4 of the trappers were killed by the Shoshone there and when they didn't return the following summer the men in Cache Valley renamed the Bourdon River in honor of Logan. It is unknown why but they obviously held him in high regard to name these things after him.. It is after Ephraim Logan that the Logan River, Logan Canyon, and Logan Peak are named. Today the city of Logan, Utah still bears his name. This information can be found in "A History of Cache County" (1997) Pgs. 8-20 by F. Ross Peterson 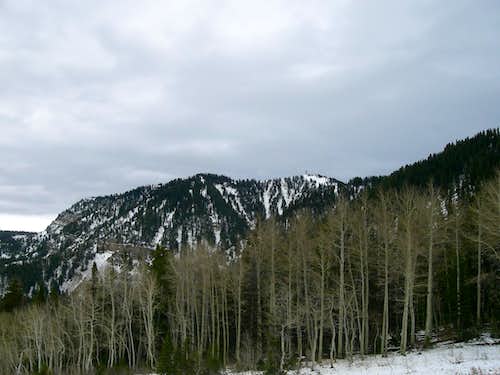 Logan Peak from the North 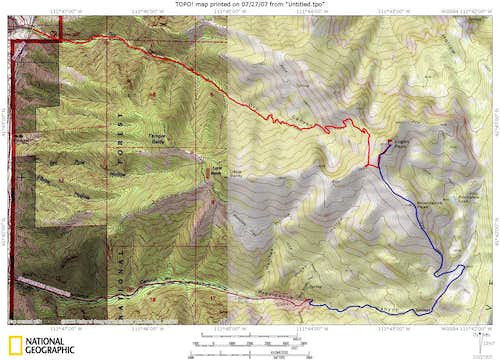 There are two main routes to the top. The first route follows the 4WD road up Providence Canyon. The second is the best climbing Route of Dry Canyon.

From the town of Providence go south on 100 East. This will turn into Canyon Road and will start to turn to the east. Eventually it will head up Providence Canyon and it will continue for about 3 miles past the forest boundary to a quarry. From there the road becomes a 4WD trail and leads to the top of the canyon. It will pass over the summit of Providence Peak and over to the top of Mount Logan.

Follow Center Street in Logan all the way to the end. It will be strait until just after you cross the Logan river and go up a fairly steep hill. At the top of the hill it will curve to the left. Take a right on Mountain Road (Center Street becomes Mountain Road near the end) and follow this to the end. There will be houses right up to where you park at the trailhead. From the trailhead it is about 4 miles to the top with about 3500 ft. of elevation gain. Most of that happens in the last miles or so, so the majority of the trail is good hiking. The trail is well maintained until the last mile. The good trail will head back towards the west on the north side of Dry Canyon and drop into Logan Canyon. Leave the trail once it starts to veer to the west and just follow the ridge to your right to the top.

For more information regarding routes up Mount Logan check out this Trip Report.

There are no established campgrounds in Dry Canyon or Providence Canyon so the nearest Places to camp would be the campgrounds in Logan Canyon. They all lie along the north slopes of Mount Logan. It is possible to climb to Logan Peak from the north but it would be incredibly difficult. There are no trails so it would be a bushwhack and the north face of Logan Peak borders on a class 3 climb in some places. There is also MUCH more elevation gain in MUCH less distance from this side. 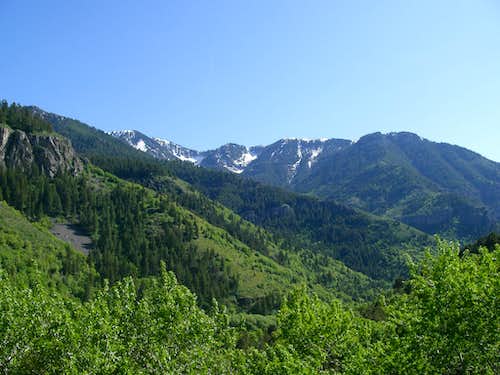 Mount Logan from near Guinavah-Malibu Campground

The Road up Providence Canyon is narrow and is a 4WD road. You will need a high clearance vehicle. SP user Dean submitted the following information: John Vitz, one of the most prolific peak baggers in the Western USA, said this,"Logan Peak: I did this as a drive up using the
Millville Canyon jeep road. This is a terrible road.
It took over four hours to do the 22 miles round
trip. It can probably be hiked from Providence
Canyon in about the same amount of time (8 m.r.t;
3000')"


Dry Canyon has NO water in it so you will need to bring your own. There is one spring along the main trail as it heads over the ridge towards Logan Canyon. It is possible to get water there but it is quite far out of your way. This is after you should leave the trail to go to the peak.

Avalanches are common in Dry Canyon as the canyon walls are quite steep. There is also great danger on the North and East sides of the peak.There was a cross country skier killed in dry canyon a few years ago by an avalache and on December 24, 2008 two snowmobilers were killed on the east face of the peak in a massive avalanche.
for current conditions check out the Utah Avalanche Center.

High winds are also quite common on Logan Peak.

It's 3.6 miles just to get to the fork in the trail, then 2.2 along the trail to get to the top. I'm not sure why the dry canyon route page tells people to get off the trail. There is a second unmentioned fork that people need to take and if they miss it they'll end up on the west ridge. Also it's 4600 feet of elevation, although the main page lists it as 3500