You have to be pretty desperate for solitude to head out to this one, especially considering that Shenandoah National Park has several maintained trails to open rock outcrops-- Hawksbill, Stony Man, Bearfence Mountain, and, of course, Old Rag (probably the best mountain in the Southeast, and one trailhead for it is less than a 30-minute drive away from Buzzard Rocks). It is not a long climb or an especially high one, but except for a trail approach that lasts about two minutes at most, it is all bushwhacking and scrambling, often through thick deadfall and briers.

Nearby, there is a series of cascades called Climbing Rose Falls. No trail accesses them, and it is likely that only a few people visit them each year. They make a nice destination and are covered in this page's route section.

Shenandoah National Park and vicinity have two Buzzard Rocks and one Buzzard Rock; this site is the one overlooking Rose River near the tiny town of Syria. Not far to the south, there is another "Buzzard Rocks," but that one is not within the park. The Buzzard Rocks covered by this page straddle the border between public and private land.

That private land is a real issue when it comes to climbing this peak. The route is longer than it has to be because you have to skirt the private land en route to the rocks. Although it is very unlikely that you will meet the landowners, the law is the law, and you have to respect it or face prosecution or worse. The local residents vary-- some are affluent city folk with second homes, some are good, down-to-earth country people who would knock themselves out to help a stranger, and some are the types who point a gun and call the cops (not necessarily in that order) if you so much as breathe onto their property, intentionally or not. I have never met the landowners whose property abuts this peak, and I take no chances. Carry a good map and use it. 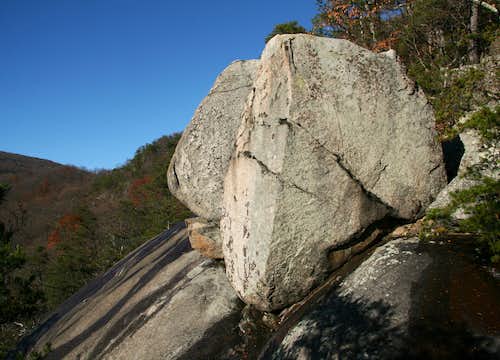 Approach from the north-- On VA 231, a scenic byway winding through farm and horse country from Sperryville about to Charlottesville on the eastern side of the Blue Ridge, drive to the tiny community of Etlan, which is about 10 miles south of Sperryville. Look on the east side of the road for a small convenience store. Directly across the road from the store is SR 643. There should be a sign indicating access to Whiteoak Canyon. Follow this road for about 4 miles until you reach a stop sign.

Approach from the south-- A few miles south of Etlan, turn left onto SR 670 and follow it all the way to the TH. 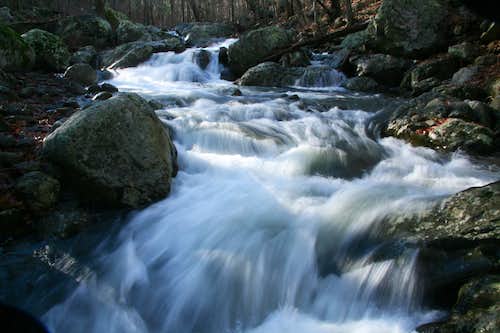 The trailhead is at about 1200', but you first have to descend to Rose River, at about 1150'. Maps put the highest of the Buzzard Rocks at about 1800', but GPS readings had them as high as 2000'. The highest of the cascades of Climbing Rose Falls is at almost 1800'. One-way distance to either destination is about a mile.

Hike up Rose River Fire Road a minute or two until you are well within the park, and then descend to Rose River.

Crossing Rose River is probably the crux of the route. The stream is usually deep (at least knee-deep on a 6' person) and swift, and there are several sections of rapids in the vicinity. It is possible, even likely, that there are easier sections not too far upstream, but heading that way to look for them is taking you in a direction opposite that which you need to go.

When you reach the stream, look for a log crossing the stream; it is not far upstream from some signs marking the boundary between private and public land. This log is sturdy but slippery when even the slightest bit damp, so use extra caution. If you cannot find the log or if it is gone, then search carefully for the best place to cross, if there even is one given the current conditions.

Across the stream, there is a long rock wall in the woods, and I presume this marks the park boundary. Once you cross over that wall, you are squarely within the park.

Now head toward the rocks, crossing some drainages (usually dry) along the way. The bushwhacking is mostly easy, but there are places where the deadfall, brush, and briers make it moderate. Remember to cheat north in order to stay well clear of the private property.

Not far below the summit ridge, there is a long, steep granite slab with two boulders perched at its head. Both boulders are short, worthwhile scrambles to small, exposed tops with fine views of the hollow below and some of the surrounding mountains.

The summit rocks themselves offer fine views as well, including a rarely seen perspective of Old Rag Mountain to the north. The view of it is not an especially spectacular one, but it is satisfying to know that few ever see it. 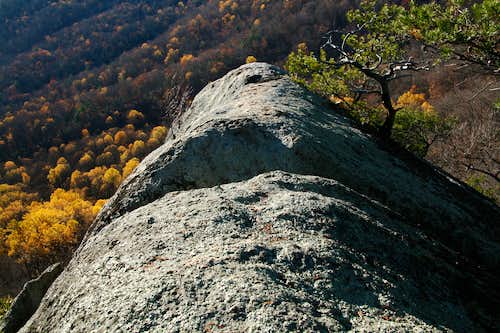 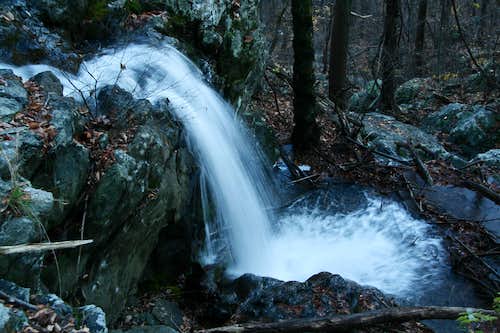 Climbing Rose Falls is an off-trail destination nearby. It is not on the USGS quad that covers this area, but it is on topo maps published by the Potomac Appalachian Trail Club (PATC). In fact, the PATC maps are great resources for locating waterfalls and crags not marked on USGS maps.

The waterfalls consists of a series of cascades, a few principal ones and some more smaller ones. In all, the drop is nearly 200', but there is no single drop of more than 30-40'.

After crossing Rose River, head upstream. The first major drainage entering Rose River on its north side is "Climbing Rose Run" (nicknamed thus for the falls-- it is not named on maps). If there is little flow in this drainage, the falls will not be worth the effort to visit, and they may actually be dry.

Follow the drainage upstream, crossing, contouring, and detouring as necessary to keep to the easiest ground. To reach the falls, you will gain about 600' in less than a mile. 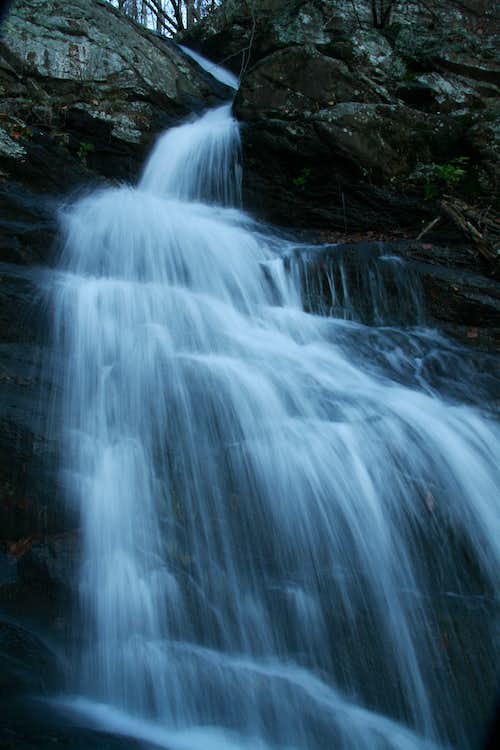 As stated above, be aware that private property must be respected.

Be prepared for poison ivy, and be wary of rattlesnakes. And check for ticks. After my climb here, I pulled eight deer ticks off me over the next few hours.

There are no campgrounds nearby, but you can sleep in your car at the trailhead.

Three miles away on SR 670 is Graves Mountain Lodge, a popular resort with motel rooms, cabins, and dining. Lodging rates and moderate to expensive. I have never stayed there and cannot say much more than this, but the lodge seems to be a comfortable base camp from which to enjoy Old Rag, Whiteoak Canyon, Cedar Run, Rose River, and, of coure, Buzzard Rocks (there are SP pages for all these locations except Rose River). 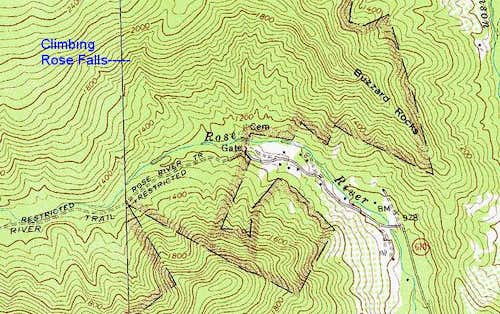