Thorofare Mountain is a broad mountain in the Central District of Shenandoah National Park.  It is about 1.4 miles north of Robertson Mountain, 1.9 miles east-southeast of Stony Man, 2.4 miles southwest of Catlett Mountain, and about three miles north-northwest of the extremely popular Old Rag Mountain.

According to Darwin Lambert’s book The Undying Past of Shenandoah National Park, a man named Arthur Long “had a fine grazing place on Thorofare Mountain between Skyland and Nicholson Hollow.”  Of course, this was before Shenandoah National Park was established.  (The park was opened to the public in 1936.)  According to the same source, the tenant who minded Arthur Long's cattle was a man named Charlie “Buck” Corbin.  The ridge that extends southeast from Thorofare Mountain is now called Corbin Mountain.  Today it is hard to imagine Thorofare Mountain as a suitable grazing site, as it is covered with trees, mountain laurel and other vegetation – but no grass.


Why climb Thorofare Mountain?  One reason is pure peak bagging - I had never climbed it before.  Attempting a new peak (via bushwhack) in Shenandoah National Park is always somewhat of an adventure and an opportunity for discovery.  Will the terrain be reasonably open, or an almost impenetrable mass of mountain laurel? Will the summit be flat and uninteresting with no clear high point, or will there be an unusual rock formation with a challenging summit block?  Will there be a view?  If so, it will be a previously unseen perspective.  Furthering one’s knowledge of the area is another benefit – it’s educational.

In Shenandoah National Park today, very few trails go to summits.  Old Rag and Hawksbill are exceptions.  The area now encompassed by the park used to be home to thousands of people (like Charlie “Buck” Corbin), who created a vast network of roads and footpaths which they used in their daily lives. After these residents were evicted, park officials apparently decided to very selectively maintain just a fraction of the trails they inherited on the land they had confiscated.  Summits were apparently not a high priority.  Numerous trails to summits depicted on old topographic maps no longer exist.  Maybe some people think they climbed a particular mountain because they walked on a trail named after it, when they actually just walked past it or around it, as on the Hazel Mountain Trail, the Catlett Mountain Trail, etc.

So, today there are many summits in the park that are enjoyed by very few people - only the few adventurous people willing to go cross-country through often densely vegetated terrain. Sometimes I attain a new and interesting summit and think to myself, “Why is there no trail here?  People would really enjoy this view, or would enjoy scrambling on these boulders.”  Bluff Mountain is one example of such a peak.  Oventop Mountain is another.

So is Thorofare Mountain.  I had been wondering why this mountain seems to have a separate name just for its summit – Pinnacle Peak.  Now I know.  After hiking along the broad, flat summit ridge of Thorofare Mountain, one ultimately reaches a formidable pyramid of huge, rounded, lichen-encrusted boulders that seem very out of place on the otherwise nondescript terrain.  This must be the pinnacle, now hidden by trees till one is almost upon it.  Scrambling to the top is fun, and can be made as difficult and challenging as one desires. It's another pleasant Shenandoah surprise, a bushwhacker’s bonus. 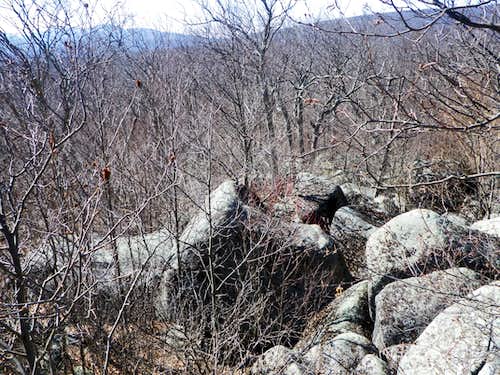 Like any other peak in Shenandoah National Park, Thorofare Mountain can be climbed in any season.  Winter is best, however, for minimally obstructed views and minimal obstructive undergrowth.

From the Washington, D.C. area:

One possible starting point for a hike to Thorofare Mountain is the Nicholson Hollow Trail.  To get to the Nicholson Hollow trail head, make your way to Sperryville, Virginia.  Take 66 west to Exit 43, then take 29 south to Warrenton.  In Warrenton, turn right (west) onto 211 toward Sperryville.  211 eventually becomes coincident with 522.  In Sperryville, stay on US 522 where it splits from 211, then turn right (south) onto Virginia 231 very soon afterwards.  In about eight miles from Sperryville, watch for a sign for Old Rag Mountain and turn right onto Route 602 / Peola Mills.  Stay on this road as it becomes Route 707 at an intersection and heads northwest, paralleling the Hughes River.  Bear left at the next fork to continue following the Hughes River to the west on Route 600. Follow this road to a large parking area on the left.  Park here and walk up the road about 0.5 miles to the Nicholson Hollow signpost on the right side.  Take the Nicholson Hollow Trail, which almost immediately requires crossing Brokenback Run, quickly followed by the Hughes River.  These crossings are not difficult. 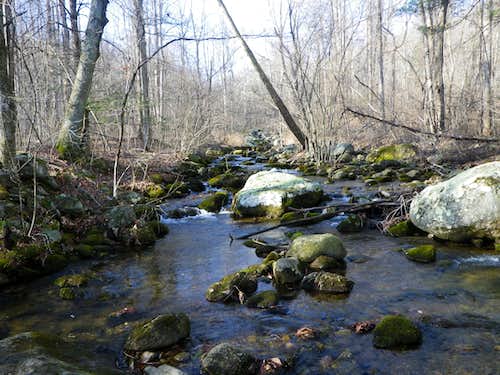 The lower Hughes River, along the Nicholson Hollow Trail: 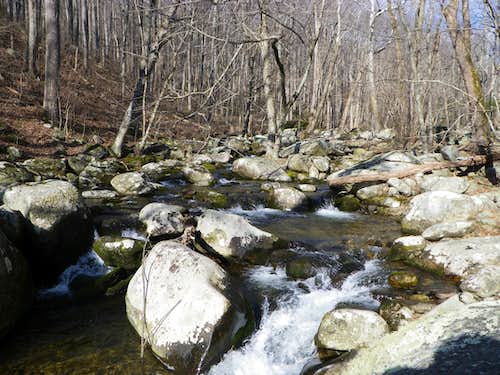 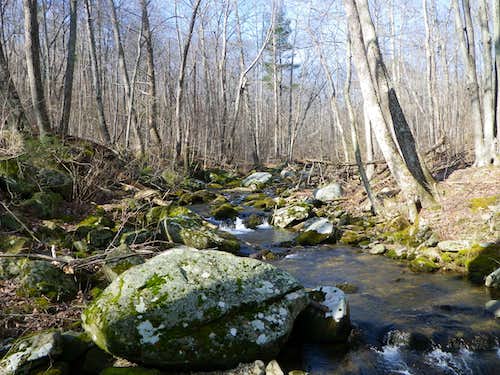 In the spirit of not diminishing the adventure or precluding the satisfaction of discovery, I am not providing specific route information.  Like nearby Catlett Mountain and Hazel Mountain, Thorofare Mountain is encircled by maintained trails that are depicted on current park maps.  There is the Indian Run Trail to the west, the Corbin Mountain Trail to the south, and the Nicholson Hollow Trail to the north and east.  The peak can probably be climbed from any direction.  Design your own approach to the summit and have an adventure!


The final scramble to the summit: 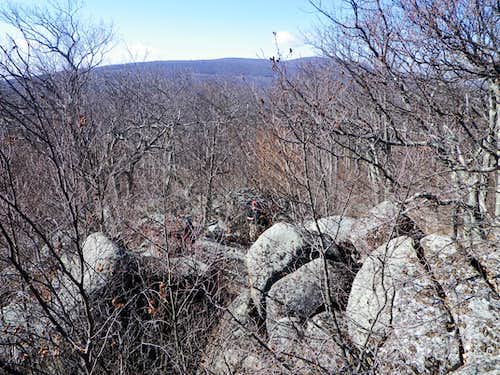 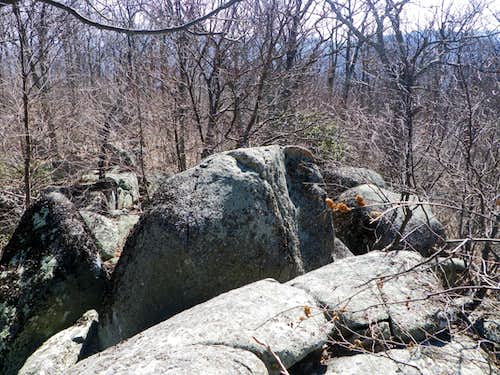