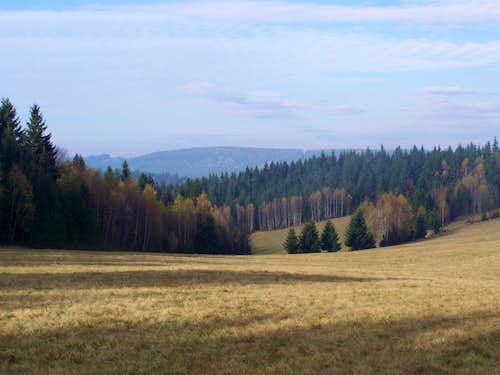 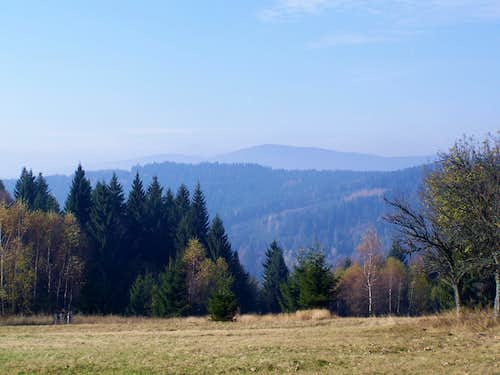 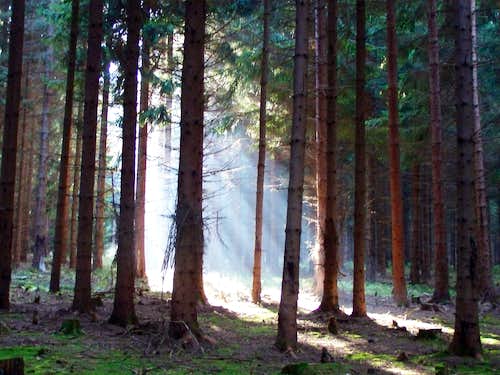 In the following text I give both the Slovakian and the Hungarian versions of the geographical names. Why? The mountain is in Slovakia, but it was part of Hungary during 1000 years. The mountain is polular among Hungarians, too, speacifically in ski season, due to its relative proximity to Budapest.

Bykovo/Páter is very similar to the numerous other mountains of the mountain range Veporské vrchy/Vepor-hegység. It is far not the highest peak of the mountain range: it has only rank #29 on the list of named peaks sorted by elevation. And this mountain doesn’t provide any special natural beauty compared to its neighbours. Still, I was willing to travel to 800 km with my family to visit this area. In the following I will describe what might be interesting in this mountain:

Kékes is a well-known and popular summit as it is the highpoint of Hungary. Isolation of each peak is defined by its distance from its nearest higher neighbour. Kékes has a quite big isolation: 77 km. And which peak determines this 77 km for Kékes? What do you think? Well, it is Bykovo/Páter!

Bykovo/Páter was the highpoint of the historic Nógrád County. Nógrád County was one of the first counties of the Kingdom of Hungary, founded in the 11th century. In the aftermath of World War I, the part of Nógrád county north of the river Ipeľ/Ipoly became part of newly formed Czechoslovakia (as Novohrad county), as recognized by the concerned states in the 1920 Treaty. Until 1920 Bykovo/Páter was the highpoint of Nógrád County. The peak was on the northern part of the county. Consequently from 1920 it was the highpoint of the northern – Czecloslovakian part – of the county. This northern area was renamed to Novohradská župa. But this administrative area existed in Czechoslovakia only until 1923.

Border between Turkey and Hungary

Though this mountain is in Slovakia now, long ago it acted as the border between Turkey and Hungary. Turkey started to attack Hungary from the 15th century. Due to successful military actions they constantly advanced to north during the 16th century, occupying more and more areas of Hungary. This occupation reached its northernmost point when the Turks occupied the castle of Divín/Divény in 1575. They possessed the castle during 18 years. In these 18 years Bykovo/Páter acted as the border between Turkey and Hungary, and it was the northernmost point of the Turkish border in Central Europe.

The source of the river Ipeľ/Ipoly

Ipeľ/Ipoly is a 232 km long river in Slovakia and Hungary, tributary to the river Danube. It has a basin of 5,151 km2. The source of the river is here, just 5 km far from the peak of Bykovo/Páter, in northern direction.

Let me give a short description about the character of the mountain. From south and from east the mountain is bordered with the deep valley of river Ipeľ/Ipoly. These hillsides of the mountain are steep, and from these directions the mountain looks to be a high mountain. This can be well seen from the water reservoir at Málinec/Málnapatak. The water level of the reservoir is on 340 meter, and so the top of the mountain north to the lake is 770 meter. This big relative height might explain why the Hungarian name of the mountain is Páter. "Páter" might come from the Latin word Pater, meaning Father…

As I already mentioned, the top of the mountain is covered with thick spruce forest. There is no outlook from the summit.

Hiking
The peak can be ascended on two marked routes: 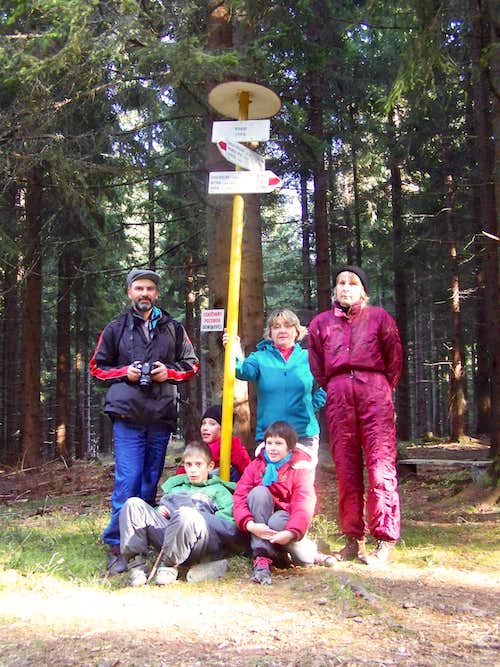 On the summit of Bykovo 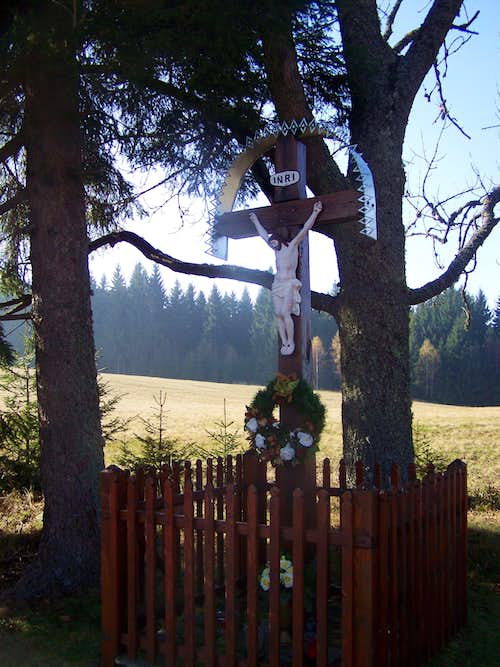 Crucifix along the Red Trail
• From Sedlo Prašivá/Rühes-hágó. Elevation of trailhead is 968 m. Distance is 2 x 2.5 km. Elevation gain to be performed is 150 meter. On half-way there are some weekend-houses. If you follow here the paved road, you will not get to the peak. Try to find here the red marks where you must turn right.
• From Látky/Latka: Elevation of trailhead is 830 m. 8 km distance, 420 m cumulated elevation gain. This route is a combination of Yellow Trail and Red Trail

Trekking
Long distance Red Trail between Veľký Krtíš/Nagykürtös and Utekáč/Újantalvölgy. This trail is approximately 100 km long, connecting some good attractions. Here I list some of the points worth mention along the trail:
• City of Veľký Krtíš/Nagykürtös
• Castle of Halič/Gács. This magnificient castle was founded in the 13th century. After the short period of Turkish occupation the castle has been re-built with 6 towers in 1612
• Stary Halič/Gácsfalu - a beautiful gothic church was built in the 14th century, with standalone wooden bell-tower
• Divín/Divény is the village having the most attractions along the Red Trail: this village has 3 fortifications:
o Castle Divín/Divény. It was built in the 13th century, in 1679 the castle was exploded and since then it is a ruin
o Fortified renaissance manor house of the robber knight Imre Balassa, built in 1670
o Fortified church, originally built in the medieval ages, and fortified in 1657
• Bykovo/Páter (1110 m)
• Saddle Prašivá/Rühes, with the ski run of Hotel Royal
• The source of the river Ipeľ/Ipoly
• Čierťaž (1102 m)
• Drahová – the highest point of the trail with 1118 m elevation
• Skicentrum Kokava-línia
• Utekáč/Újantalvölgy 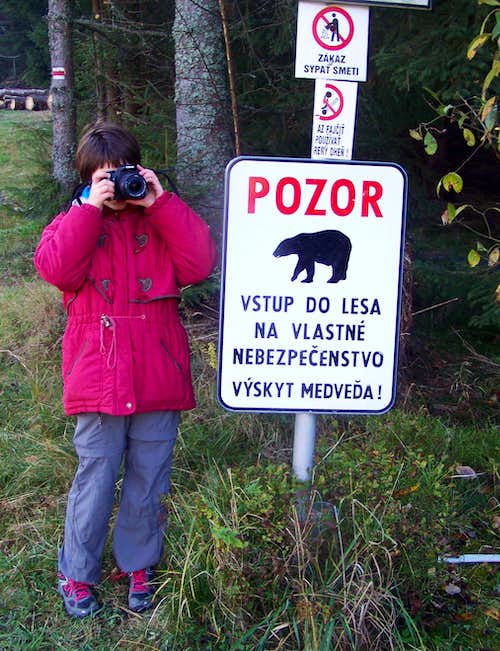 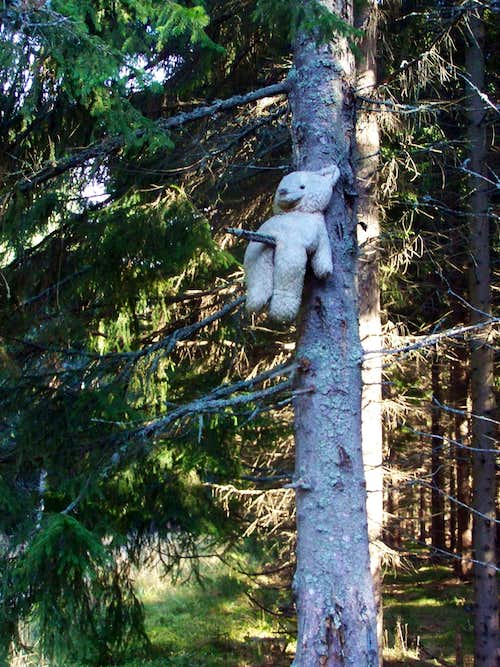 ... and we met one!
Bears!!! Signs around the mountain warn the hikers that they can enter the area only on their own responsibility due to danger of bears!

There is no tourist hut on Bykovo/Páter. But there are two shelters near the source of Ipel’/Ipoly. And there are hotels and guesthouses in Látky/Latka and in Šoltýska/Újantalfalva.

In Divín/Divény there are two campsites:

Kemp Divín
This camp is only for caravans!
Website: www.ekempy.sk/banskobystricky/lucenec/246-