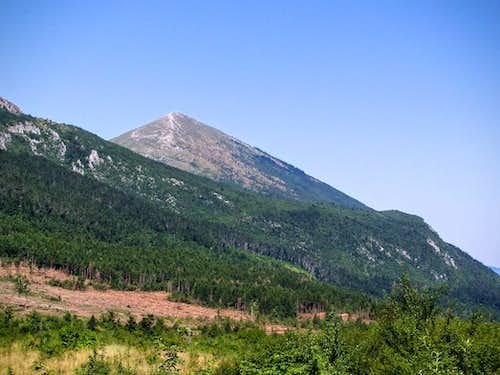 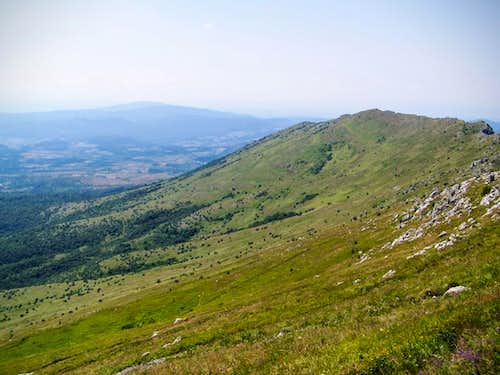 The mild southern slopes of Rtanj
Southern Carpatians of Romania and Stara Planina of Bulgaria.
Rtanj (Ртањ with Serbian Cyrillic letters) is the highest mountain of the Serbian Carpathians. It is 7 km long in western-eastern direction. Its highest peak is called Šiljak (Шиљак), and it is 1560 meter high. Šiljak simply means ‘Peak’ in Serbian language.
Rtanj can offer something for every kind of people:

- Geographers should visit it since this is the highest point of the Serbian Carpathians, and it is a typical limestone Karst terrain of the Balkan Peninsula

- Peakbaggers must visit it because its prominence is more than 1000 meter, and also its isolation is quite big: 65 km

- Biologist can study its rich flora and fauna

- And finally this mountain is a real paradise for people having various transcendent believes. Let’s see some details about the legends!

According to the oldest legend a wizard had a castle on the top of this mountain, guarding a great treasure. But the castle can’t be seen now because it has sunk into the mountain, together with the treasure. The story doesn’t end here. The wife a former local miner built a chapel dedicated to St. George in 1932. But there are people believing the legend of the treasure! One of them destoyed the chapel with dynamite while hunting for the treasure. Now there are small ruins of the chapel. It seems that every year it is getting smaller. I checked the location on Panoramio before climbing the mountain, and on some older photos still an arch of the chapel could be seen. In 2016 there was no arch any more, just low walls.
There are other beliefs about the mountain, too. Doomsday fanatics believe that alien visitors have left behind a 'pyramidal' structure is thousands of years ago, and the mountain is this pyramid having special energy. Fanatics believe that the mountain would protect them on the day of Armageddon if they stay in the vicinity of it. According to the Maya Calendar this day came on the 21st December 2012. On this day the vicinity of this mountain was full of people… You can read more about this story in a Daily Mail article:

http://www.dailymail.co.uk/news/article-2246305/Doomsday-fanatics-flock-Mount-Rtanj-believers-say-houses-alien-pyramid-magic-powers.html
And there is another curiosity of the mountain, too. If you go to the village Rtanj, you see that in many houses they sell Rtanj Tea (Rtanjski čaj). It is made from winter savory, and it is famous about being antiseptic and a kind of aphrodisiac.

The area is a natural reserve since 1958. Up to now 644 plant species have been identified on Rtanj mountain. 25 of them are endemic. The fauna is also very rich with 102 identified species. It's not possible to list all species here. Just some examples of the Fauna:
… and some species of the Flora: 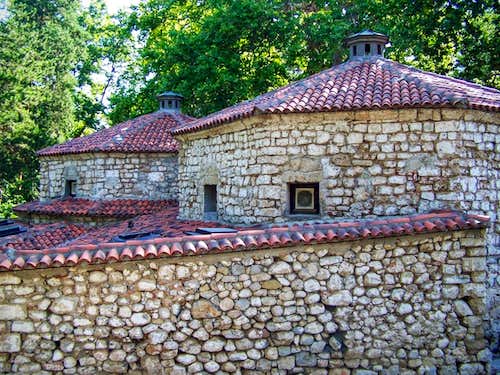 Old Turkish Bath in Sokobanja
people arrive to this hill from the direction of the E75 highway connecting Belgrade with Niš. The trailhead of the normal route to the mountain is in the village called Rtanj. There are two routes how you can get from the E75 highway to this village:
And some history: if you come through Sokobanja, don't miss to have a look on the Turkish bath that was built in the 16th century! 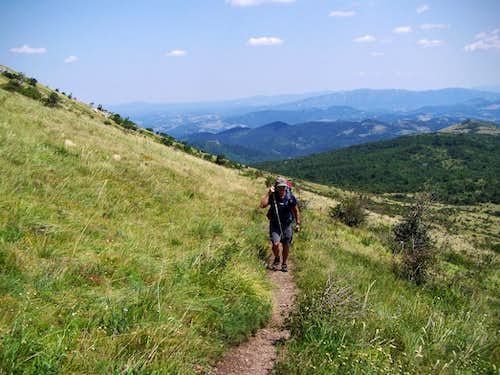 The normal route to Šiljak
normal route to the peak is a marked trail (red dots) with its trailhead in Rtanj village. The trailhead is at 610 meter elevation above see level, and since the peak is 1560 meter high, this route represents 950 meter elevation gain. The length of the route is 6.7 km. So 13.4 km if you want to return to the trailhead.
From the trailhead you can see the peak in W-NW direction. But the trail starts in S-SE direction. Don’t worry, in the end all will be OK! Here is a self-made map: 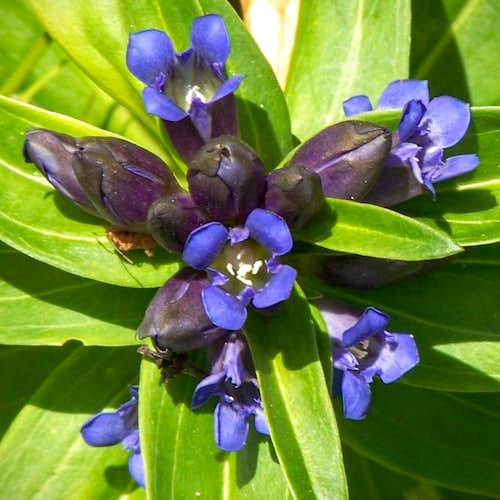