Mátra – and its highest peak called Kékestető – is not a very impressive place for the first look for experieneced mountaineers. Still, it is one of Europe’s highpoints, and the highest of Hungary. This is one reason why to visit this mountain. On the other hand, if you go there with opened eyes and heart, you will find the beauty of this place. 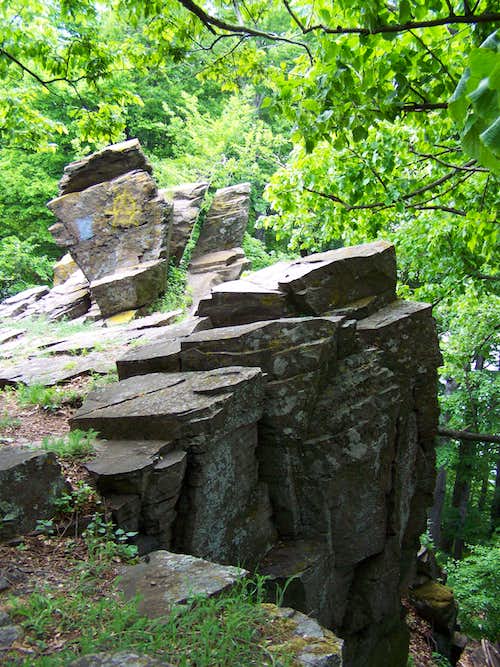 One of the several volcanic cliffs

Mátra is a mountain range in northern Hungary, between to the towns Gyöngyös and Eger. The country's highest peak, Kékestető (1014 m), belongs to this mountain range.

The Mátra Mountains are part of the Northern Mountain Range and belong by origin to the largest young volcanic zone of Europe. They are situated between the valleys of River Tarna and River Zagyva. The Mátra Mountains can be divided into several readily distinguishable parts. The highest point of the Western Mátra is Muzsla (805 m). The so-called Central Mátra consists of the plateau of Mátrabérc (Mátra ridge) and the groups of the volcanic cones of Galyatető and Kékestető. Steep, rugged slopes, screes, talus slopes and slides alternate with one another, covered with closed beech forests. Gentler slopes and parallel valleys flow down to the south, the largest of which is the so-called Nagy-völgy (Great Valley). The 'main entrance' to the Mátra Mountains was formed in parallel with the valley of Nagy-patak (Great Stream), ranging from Mátrafüred to Mátraháza. From the vineyard-covered landscape of the foot of the Mátra travellers can arrive at the wooded mountains in a flash. To the east, after the steep escarpment of the 898-metre-high Saskő (Eagle Cliff), the 650-750-metre-high peaks of the Eastern Mátra follow one another. The northern part of the mountain range is called Mátralába (the Mátra's feet). This is a hilly area covered with 250-400-metre-high small volcanic cones, with mostly cultivated arable lands. 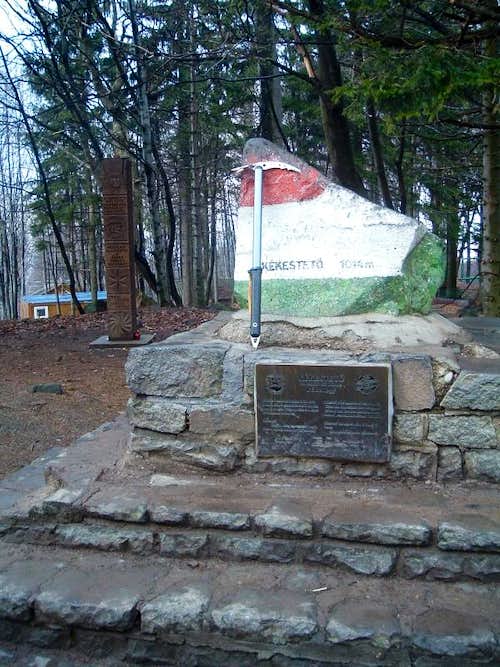 The highest point of Hungary 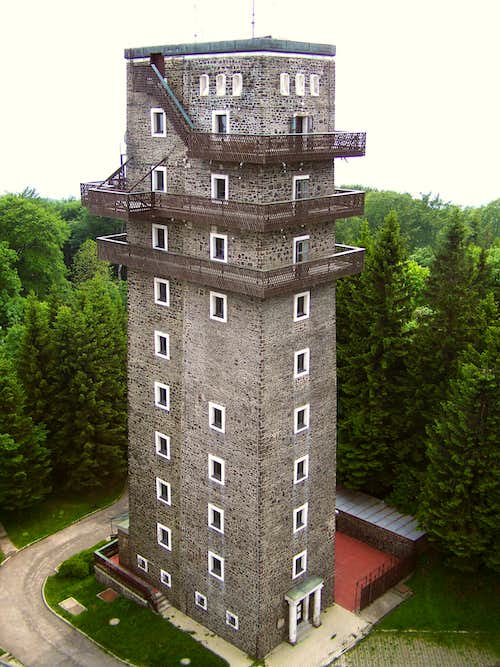 The older tower on the summit

Kékestető is the highest point of Hungary since the Treaty of Paris (1947). The old Tv-tower started its operation on the peak in 1958. It’s not in use any more. A new, 180 meter high tower was built in 1981. The top of this tower is in 1200 meter height. Tourists can ascend the tower. Entrance fee for adults is 400 HUF, for chlidren it’s 280 HUF. An elevator lifts the visitors either to the opened circular lookout terrace or to the closed area of the bar having a panoramic view.

Kékestető is one of the few skiing places of Hungary.

There is a small grocery and some restaurants on the top of the hill, too. 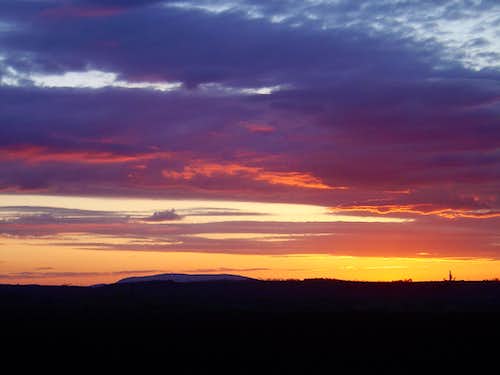 View from the M3 highway

With car practically you can drive up to the peak. 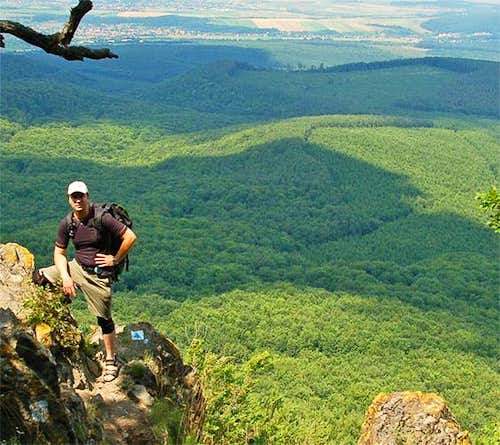 The Mátra mountain is criss-crossed with tourist paths. If your goal is to go up to the peak Kékestető without use of any mean of transportation, then you have the following good options:
- From Mátraháza: 2 x 2.6 km
- From Mátrafüred or from the nearby Mátrafüred-Sástó where the camping is: 2 x 5.5 km
- From Parádóhuta: 2 x 6 km
- From Parádsasvár: 2 x 7 km
- From Markaz: a total of 23 km

I describe this last route from Markaz, because it is a hiking route giving the chance to do similar efforts as if you climb a (smaller) peak in the Alps.

Start this tour from the Markazi-tó – the lake at the village Markaz. The lake is on 170 m above see level. If you go up to the peak Kékestető, you can do a total elevation of 844 m. This is the biggest elevation gain that you can do and achieve in Hungary. Walk from the lake-side to the village centre (1.5 km). In the village center you will see signs showing the direction to the ruins of Castle Markaz. The castle collapsed as the consequence of an Ottoman-Turkish raid in 1552. The castle is in 450 meter ASL. After visiting the castle and looking down the lake where the route started, you can countinue the tour to north. 5 km walk to north, with a constant not too hard ascend, up to the cliff called Disznó-kő (735 m). Your way up to here will be on steep rocky slopes, but the trail goes constantly in the side of the slopes, so it’s not too difficult. From the cliff called Disznó-kő the peak Kékestető is a further 3 km in western direction. This 3 km is the most beautiful section of the route, with nice cliffs (the best is the cliff called Sas-kő) and other rocky-formations, and with really steep slopes along the path. The vegetation is also impressive with the old beech-forests.

If you plan to return to the starting point, to the lake at Markaz, do it in a shorter, quicker but more challenging way. Go down from Kékestető in south-southest direction, to the cliff called Kis-kő. It’s a 3 km long easy descend. “Kis-kő” means „Small Cliff” – but it’s not small at all. It’s quite big. The cliff is at elevation 740 m. The adventure starts here. Go down to the valley called Vár-völgy. The valley is on 400 m height and the descent is not much more than a km. The path is really steep. Not many people go there because of the conditions. It’s rocky and not a well marked path. There used to be a well marked path here earlier, but I suppose that the marks have been removed because of the bad conditions of the path. Now – instead of the official signs -you have to follow the blue paint spots that were intended to hide the original marks. When reaching the stream in the valley, turn south and in 3-4 km you will be back to the lake where you started the route. 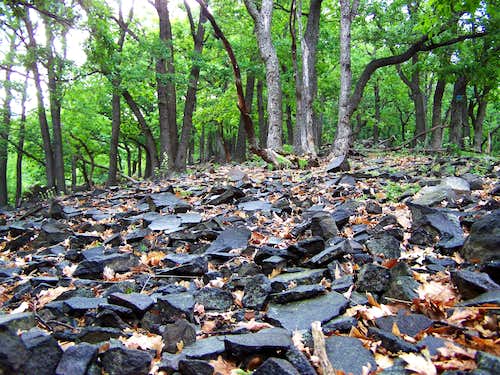 Not an easy place for life...

The Landscape Protection Area of the Mátra was established in 1986 - on a territory of 12141 hectares - to protect the nature and landscape of the Mátra region. This organization, which belongs to the Directorate of the Bükk National Park, makes sure that the original state of the Mátra is not disturbed by any interventions that may cause damage to its landscape and nature in the long run. The special natural values are kept safe on a strictly protected area of 2209 hectares, covered mainly with forests. All the beauties of a montane forest landscape can be found here, with natural habitats, a unique flora and fauna, geological formations of various shapes.

Anybody who enters this world is obliged to preserve the flora, the fauna and the geological values and to ensure that they remain undisturbed on the territory of the Landscape Protection Area. The mountains and forests have not been preserved to help humans "break loose" but to become "shrines" of nature, places where people are only visitors, guests, therefore they have to behave like guests, appropriately and in harmony with the spirit of the place. It is forbidden to collect plants, animals, natural formations or rocks; they represent a real value only here, in this landscape, so it makes no sense to "export" them. The opportunity to enter the strictly protected areas is limited, only the marked trails can be used by hikers. Mountain cycling is allowed only on routes marked by maps. Vehicle traffic is strictly forbidden everywhere, except for roads. The written permission of the conservation authorities is required in all cases for public and sports events in the Landscape Protection Area.
Further information can be received from: