Towering more than a vertical mile above the city of Tucson, the huge massif of Cathedral Rock is the fourth-highest summit in the Catalinas. The peak can be seen from most places in the Catalina Mountains and is easily recognized by its craggy summit. Like many of the surrounding peaks, Cathedral Rock is a “sky island” – meaning that the lower part of the mountain is desert and only as you climb higher do forests begin to appear. However, a damaging fire roared through the Catalinas in 2002, burning much of the peak. The very top of the mountain is a maze of rock comprised of fallen trees, numerous spires, and towers. 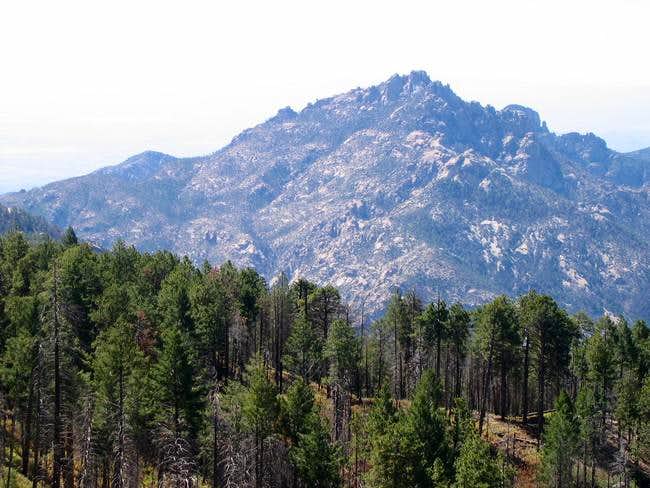 Of the major Catalina peaks, Cathedral Rock is by far the most difficult to climb by its easiest route. While one can practically drive to the summits of Mt. Lemmon, Mt. Bigelow, Marshall Peak, and many others, the ascent of Cathedral Rock requires a hike of at least fifteen miles and a gain of more than 4,500 vertical feet – no matter which trailhead you start from.

Not only is the climb a long one, but the summit is a rock tower protected by a short stretch of fifth-class climbing. Hikers uncomfortable with this kind of climbing face the possibility of an ascent to within a hundred feet of the top but may be able to go no further. But for those who persevere, incredible views of the surrounding desert and the Catalinas are found at the small, exposed summit.

Both of the two most common approaches to this mountain begin at the Sabino Canyon Visitor Center. Locate Tanque Verde road, which begins in east central Tucson and after about a mile intersects Sabino Canyon road. Go left (north) on Sabino Canyon road and follow it for about 4-5 miles. Here you’ll see a sign for the Sabino Canyon Recreation Area on the right. Turn in and be prepared to either pay for a day pass or show the one you already own.

While the summit of Cathedral Rock is somewhat cooler than Tucson during the summer, most of the 15+ mile round trip hike is not. At almost 8,000 feet, the peak is also high enough to often collect snow and ice during the winter – which can be a hazard, especially on the final climbing portion of the ascent. The recommended times for climbing are spring and fall.

There are a few camping spots in Geronimo Meadows – which is about 4-5 miles up the Esperero Trail from Sabino Canyon. It isn’t really a meadow; rather, it's just a more or less flat area of desert. There are also a couple of existing sites in Esperero Canyon itself, another mile or so up (north on) the trail from Geronimo Meadows. This kind of area takes a long time to recover from damage - as can be seen from the fire damage - so please use existing campsites and fire rings whenever possible instead of creating new ones.

Sabino Canyon and the surrounding areas are home to a number of mountain lions. In recent years the canyon has occasionally been closed due to the aggressive behavior of these lions. I have personally had an encounter with a lion less than five miles from the Esperero trail (which is a main route up Cathedral Rock). Rattlesnakes can also be found in Sabino and the surrounding canyons. If you choose to hike or climb in the area, take the necessary precautions!

The Summit of Cathedral Rock

It can be somewhat difficult (and perhaps frustrating) to locate the exact summit of Cathedral Rock. Cairns lead to a point that is not the high point, and there is no summit register on any of the highest summit spires. The best method available may be trial-and-error. On the summit plateau itself there are three towers which are visibly higher than all the others and are roughly aligned north to south. All require a 5th-class move or two. However, the northmost tower is the highest of the three by a matter of feet – as will be readily apparent when one climbs all three of them!