Unnamed 4910 - locally known as "the Cleaver" - is a jagged, rocky ridge located on the Pusch Ridge. The Pusch Ridge itself is a formation which forms the far southwestern boundary of Tucson's Catalina Mountains. West of the ridge, the Catalinas drop off into the Oro Valley, north of Tucson. On its east side, Pusch Ridge slopes down into Pima Canyon. The ridge is comprised of a number of peaks which grow progressively higher as the ridge travels northeast into the Catalinas. These summits are, from southwest to northeast: Pusch Peak, the Cleaver , Bighorn Mountain, Table Mountain, UN 6020, and UN 5985. Soon after this the Pusch Ridge turns south and merges with the massif of Mt. Kimball. 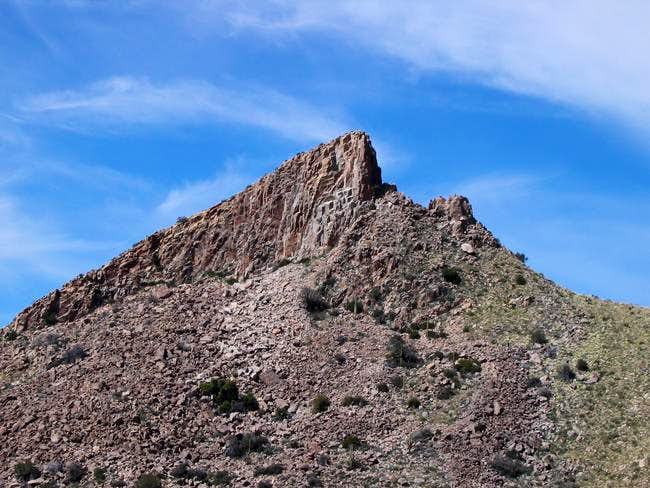 The Cleaver from Pima Canyon
While all of these summits can be reached from the west (Oro Valley) side, the nearest trail is Pima Canyon. This route follows the wash between Pima Canyon and the huge mass of Prominent Point to the east. Pima Canyon trail will get you close to the ridge, but unfortunately a lot of bushwhacking is still necessary. The climb of UN 4910 starts out as off-trail hiking through shindaggers, catclaw, and many other varieties of cactus... and finishes on the loose rock of the Cleaver itself. Due to these difficulties, the Cleaver is not often approached and even more seldom climbed. However, for the persistent (or masochistic!) the summit rewards you with magnificent views of the southern Arizona desert to the west and the Catalinas to the east.

Despite its relatively low elevation and close proximity to both Pima Canyon trail and Tucson, climbing the Cleaver is no simple matter. The rock is ungodly loose and I know a number of climbers who've had holds and boulders let go on them. There have been quite a few injuries and at least one well-publicized climbing death in Pima Canyon. As recently as September 2004, a hiker was badly injured here and had to be evacuated by air.Here's a link to that hiker's story, provided by SP's PeakMule.

The Cleaver is best approached from Pima Canyon. To get to Pima Canyon, take Tucson's Skyline Drive, a major road that parallels the Catalinas just south of the foothills. Skyline turns into Ina road here; the intersection of Ina and Christie is just west and is also on this map. At that intersection, go north on Christie. This street dead-ends at Magee. Turn right here, and park at the lot (it's called the Iris Dewhirst trailhead) straight ahead of you.

No dogs are allowed on the Pima Canyon trail. Furthermore, off-trail hiking - which is necessary to reach the summit of the Cleaver - is prohibited from January 1 - April 30th, as this area is home to a number of bighorn sheep.

Summer temperatures make this an undesirable climb during most of May, June, July, August, and September. Likewise, the off-trail prohibition makes this climb illegal in the late winter and spring. Therefore the best times are the months of October, November, and December. 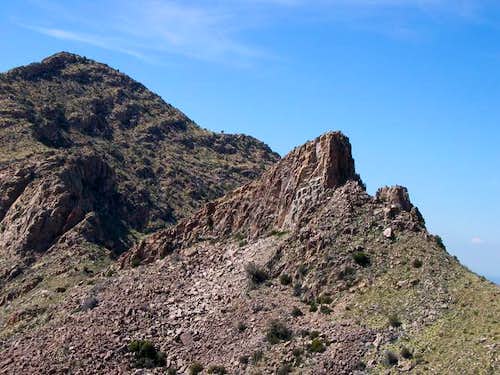 Camping is allowed here; however there are very few campsites in Pima Canyon below the cutoff for the Cleaver. Furthermore, the brevity of the climb is such that making a camp is unnecessary.

While the Cleaver does not have enough prominence to be considered a "true" peak by the 300 ft. rule, it is nevertheless a difficult climb - more difficult than many of the higher Catalina summits - and a worthy objective.

If you've got anything to add, add it here. I'll check it out as soon as I can.