This a quote according to paulmirocha:

"Because of the nature of Tumamoc as an ecological research preserve with over 100 years of continuous long-term study areas, and the huge recent increase of visitors, all trails on Tumamoc Hill including the trail from A-mountain park are now closed. For the same reasons, hikers are asked to become stewards of this valuable urban wilderness and stay on the paved road. This road is off limits weekdays 7:30 to 5:30 due to traffic going to the Desert Lab and towers on the summit. Evenings, mornings and weekends are good times to go. The summit is a sensitive archeological site that is also closed to the public except by permission, due to increasing vandalism"

It appears that Tumamoc Hill is now closed off to hiking during the weekday. I will be looking more into this very soon. Thanks paulmirocha for updating me on Tumamoc Hill. 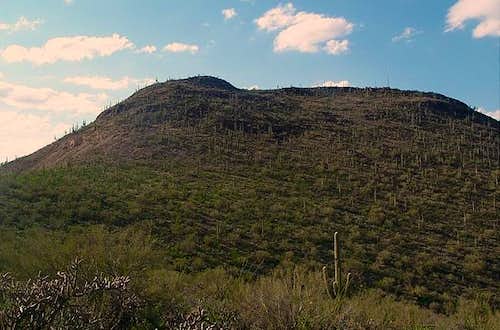 Tumamoc Hill is a well-known summit located just west of downtown Tucson. This summit is important in many ways to the area. The name implies that the summit is a site of an ancient ruin. Today there are still plenty of clues linking to the past Hohokam culture that lied there 900 years among. The summit is filled with petroglyphs (pictures drawn on rocks) which the past life of the Hohokam tribe. Many of the artifacts from the top of the summit are now located at the University of Arizona. 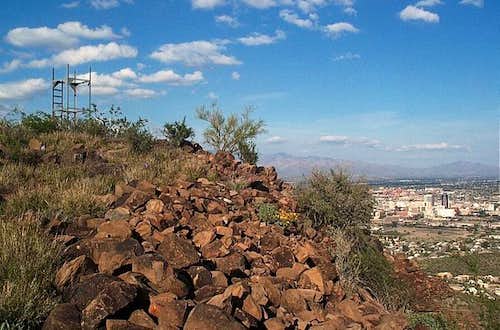 Near the summit of Tumamoc Hill

Tumamoc Hill is also known for its contribution to astronomy. In the late sixties Tumamoc Hill was used to test prototype cameras that were to enter Pioneers 10 and 11. The Bailey Dome was also built here in the sixties. In 1973 the telescope was use to study activity on Jupiter and Saturn. This telescope was used as well in 1985-1986 with the Comet Haley, Comet Hale-Bopp, the moon and Mars. 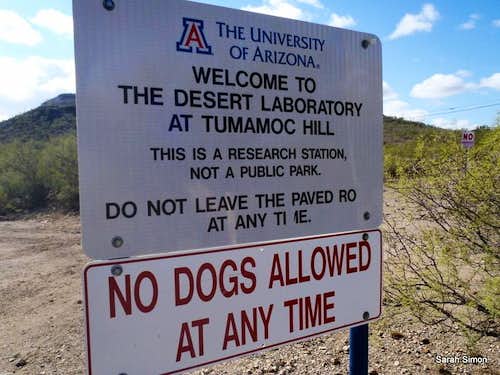 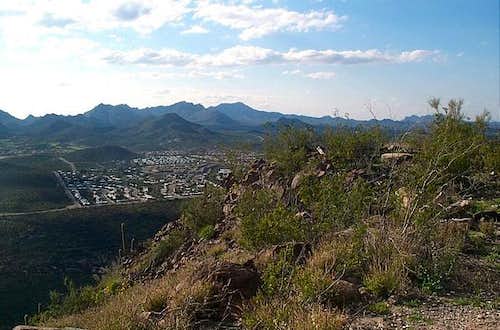 View from the summit area

VIA SENTINAL RIDGE TRAILHEAD: From exit 258 on I-10 head west on Broadway away from downtown. Stay on road until the road until just before the road veers a sharp right. Make a left on South Cuesta Ave. The road then turns into South Sentinel Peak Road. Halfway up the ridge the parking will be on your right.

VIA TUMAMOC HILL RD: From exit 258 on I-10 head west on Broadway away from downtown. Stay on road and take the sharp veer right onto Silverbell Rd. Take a left on West Anklam Rd and then a right onto North Tumamoc Hill Road.

There are no fees in Sentinel Peak Park. However there is an 8 pm park curfew.

This mountain can be hiked at anytime. Winter and spring would be the preferred time though due to the heat.

No camping is allowed on the mountain due to the fact that it is in very close proximity to downtown Tucson.

The weather is very similiar to Tucson. For more information on the park call Sentinel Peak Park at 502-791-4871. The website below will give you a live daytime shot of downtown from Tumamoc Hill. 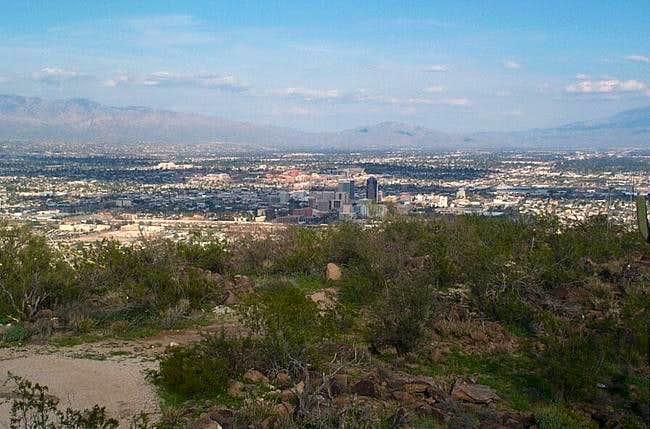