Mt. Kimball is one of the highest peaks along the southern front of the Santa Catalina Mountains. The Catalinas rise just north of Tucson, Arizona, and their forested summits often carry winter snow while far below, Tucson is warm. Like many of its neighbors, Mt. Kimball is a "sky island" - its lower slopes are desert, and only as you climb higher do thicker vegetation and forests begin to appear. 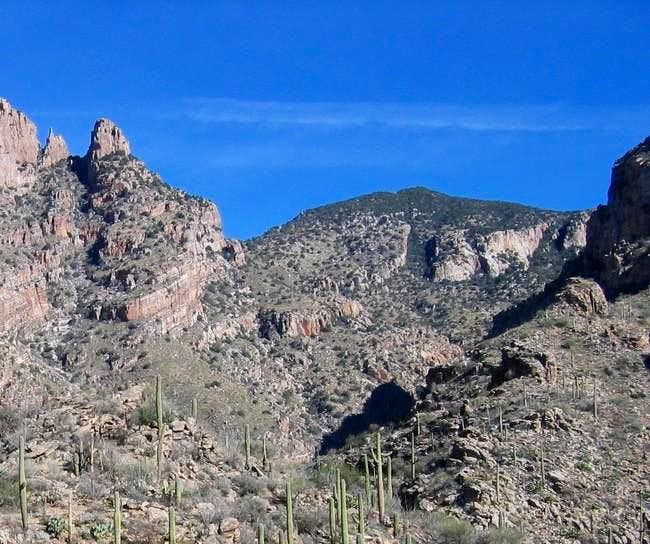 Mt. Kimball from Finger Rock Canyon. Finger Rock itself is at left; Kimball is behind at right.


Although it does not present a forbidding face from most directions, Kimball still towers almost a vertical mile above Tucson and is a long, steep day trip for many hikers. The summit of Mt. Kimball also provides spectacular views into the heart of the Catalinas and of the surrounding southern Arizona desert.

For Finger Rock Canyon, take Skyline Drive, a major road that parallels the Catalinas just south of the foothills. From the intersection of Skyline and Alvernon take Alvernon north. The road dead ends at the Finger Rock Canyon trailhead.

For Pima Canyon, the trailhead starts further west. Skyline turns into Ina road here; the intersection of Ina and Christie is just west and is also on this map. At that intersection, go north on Christie. This street dead-ends at Magee. Turn right here, and park at the lot (it's called the Iris Dewhirst trailhead) straight ahead of you.

No dogs are allowed on either the Pima Canyon or the Finger Rock Canyon trails. Off-trail hiking is sometimes subject to seasonal closure, but given what off-trail hiking is like in this area (wading through fields of shindaggers and other sharp plants) this isn't usually a problem. Other than that there's no red tape.

Mt. Kimball can be climbed year-round, but hikers would be wise to avoid the summer months, when temperatures in Tucson often rise above 100. If you get an early enough start it's possible to be on the summit for good weather in the summer, but most hikers prefer to do the climb in the spring or fall. At the other extreme, snow and ice can sometimes be found high on Kimball in the winter months. 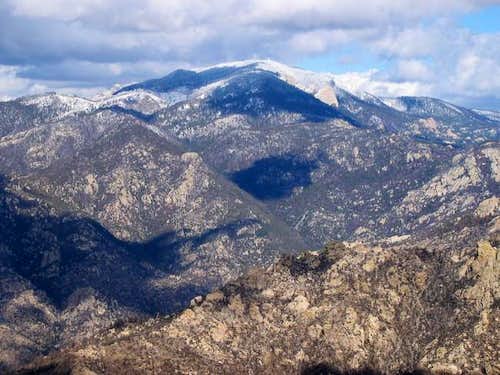 Looking at snowcapped Mt. Lemmon - the highest peak in the Catalinas - from the summit of Mt. Kimball.

While a climb of Mt. Kimball does not usually necessitate a high camp, camping is permitted in the Catalinas and there are some good sites at the 6850' saddle just south of the peak. Many campsites in the Catalinas have suffered heavy and incosiderate use (ie; the construction of multiple fire rings) in recent years; please try to make as little impact as possible if you choose to camp here.

Around a quarter-mile from the summit of Mt. Kimball, the Pima Canyon trail intersects the short spur trail that heads to Kimball's summit and its overlook. This intersection used to be marked with a cairn; however, on my two last hikes to the summit, I noticed that the cairn was gone (most recently in February 2008). If you summit and then miss your turn here on the descent, you'll be heading down the wrong canyon. Hopefully unfamiliar views would clue hikers in to the fact that they're going the wrong way, but nevertheless it could be a grueling hike retracing your steps back up to the intersection just below Kimball's summit. Pay attention and don't miss the turn!

In 1931 Mt. Kimball was named after Frederick E. Kimball, a land developer who went on to serve in the Arizona State Senate. Kimball pushed for a road up Mt. Lemmon (the highest of the Catalina summits), and promoted the building of Summerhaven, the community just below the top of Lemmon. It is not known whether Kimball ever stood on the summit of his namesake peak.