For those who've traveled to Tucson, the craggy, distinctive summit of Thimble Peak is a well-known landmark. The rocky peak can be seen from many places in the city, and it is also visible from the Mt. Lemmon highway. Thimble, shaped like its namesake, rises from the foothills of the Santa Catalina Mountains north of Tucson, and is one of the summits along the southern front of the range.

But while most of the Catalina foothills are easily accessible, Thimble Peak is protected by steep cliffs and the summit is a rocky tower with no easy way up. Although many hikers can reach the base of the summit cap, surmounting the cap itself requires a short stretch of 3rd - 5th class climbing. 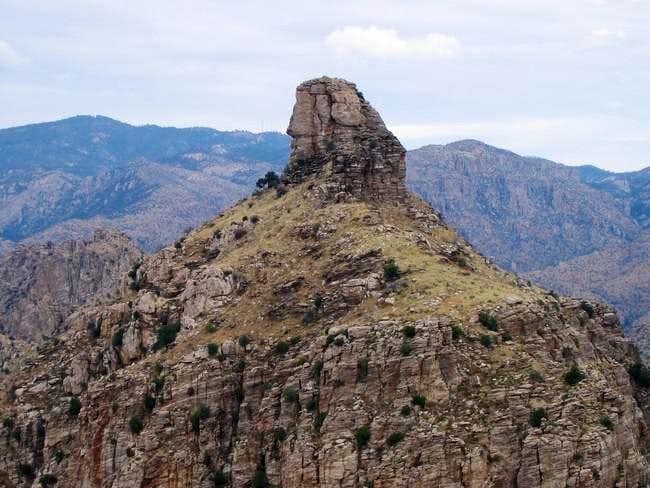 Thimble Peak viewed from nearby UN 5001

Thimble peak is one of four peaks on a ridge which runs from northeastern Tucson into the heart of the Catalinas. Sabino Canyon bounds this ridge on the west side, and on its east side the ridge drops off into Bear Canyon. From south to north the mountains are: UN 4409 (sometimes known as Saddleback), UN 5001, Thimble Peak, and UN 5420. Of these, Thimble Peak is the most difficult climb by its easiest route.

Despite the fact that Thimble Peak is visible from much of Tucson as well as numerous other places in the area, it is not frequently climbed. The lack of trails to the peak itself and the technical nature of the summit block certainly play a role in discouraging climbers.

Thimble Peak is located in the Sabino Canyon Recreation Area, which is part of the Santa Catalina District. Regarding the two possible approaches, both Mt. Lemmon and Sabino Canyon are fee areas. A daily use fee of $5 can be paid, or an annual pass of $20 can be purchased. If you have a Golden Eagle Pass, you can get in free. If you've got a national parks pass, you can upgrade it for $15 and get into Mt. Lemmon and Sabino Canyon for as long as your national parks pass is good.

The mountain can be climbed year-round, but hikers would be wise to avoid the summer months, during which temperatures in Sabino Canyon and nearby frequently reach 100 and above.

The many dangers common to other peaks in other areas are applicable here as well. In addition, there are a number of hazards especially particular to southeastern Arizona.

The first and most obvious is heat; here, it can be a killer. Everyone's heard the catchphrase "it's a dry heat" - in fact, this probably should be on the AZ license plate. But although the low humidity makes 100 degrees more comfortable here than it would be out East, there's a danger. The severe aridity dries perspiration to the extent that you may not even realize that you're sweating buckets until it's too late. Bring a lot of extra water when climbing here - you won't be sorry you did. I'd recommend leaving some in your vehicle or at the trailhead as well, just in case you run out during the climb.

The Tucson area - the Santa Catalina area in particular - is home to a number of mountain lions. In recent years, Sabino Canyon has occasionally been closed due to the aggressive behavior of these lions. I have personally had an encounter with a lion just below the summit of Thimble Peak. Rattlesnakes can also be found in the Tucson area. If you choose to hike or climb here, take the necessary precautions!

The cacti and other sharp plants here present problems as well. If you stay on paths the damage will be minimized, but if you're climbing to an off-trail summit - like the Cleaver or Prominent Point - then prepare to bleed. While long, thick pants can help, some of the foliage here (like the broad-bladed yucca) can punch through clothing as easily as they punch through skin.

A final danger is presented by loose rock. True, you can find loose rock many places, but enough of the spires here are composed of it that the rock type has acquired the popular nickname: "Arizona desert junkoid." While there is some fine granite to be found - on Mt. Lemmon and Baboquivari Peak, for example - loose rock is a severe danger in many places. Some of the worst of it is clustered along the front of the Catalinas, on peaks such as the Cleaver, Shark's tooth, Table Mountain, and Window Peak.

Camping is allowed in most of Sabino Canyon and in the area surrounding Thimble Peak on the other sides as well. However the mountain itself is a straightforward one-day climb, and a high camp is not necessary.

The Mt. Lemmon highway is experiencing heavy construction due to damage caused by recent fires. The website for the latest closures is:

Here is the forest service's page on Sabino Canyon:

There is a back way to hike /climb Thimble Peak that is longer, but has less elevation gain. I think it is about 10 miles roundtrip. From Catalina Highway, park in the parking lot on the southwest side of the road at mile marker 7. It is the old Soldier Camp Road and Trailhead. The wash leads to the climbing area known as Jailhouse Rock. Instead follow the old dirt road as it heads west. Once you hit Sycamore Spring Reservoir, the road becomes a trail. Follow the trail west to the junction with Bear Canyon Trail. Hang a left (south) and you will follow that trail until it starts to head downhill. Look for some cairns that mark a faint trail heading to the right and towards Thimble Peak. Follow this faint trail all the way to the peak.

Hans, very interesting! I've actually climbed at Jailhouse but never thought about doing Thumble from there. Want to do a route page? If not maybe I can check it out. How's life and climbing?

Thanks for the reply! I wouldn't mind doing a route page...but I don't think I have many pics...if any at all! I will have to double-check. Life has been busy...we are trying to adopt. Climbing has been sparse, but I am hoping to get out more this summer. You?

I hear you amigo... heck, I haven't made a new page (other than the Sedona one) in a long damned time. How's the adoption thing going? My summer's fun - lots of trips (Hawaii was one) and fun, just not much climbing here either....

Hey, I found my old pics and put up the page - named Thimble Flat! Enjoy!