Cerro Carambola, a.k.a. Carambola Mountain is a diminutive but enchanting peak located on the coastal island of Roatan on the north shore of this small Central American country, at 570 feet above sea level, Carambola is not really a high peak, but rises straight from the ocean. Named for a delicious fruit, Cerro Carambola is one of the higher peaks on the island of Roatan. A hike to its summit is a steep but easy endeavor and along the way one can expect to encounter iguanas, beautiful flowers and exotic plants, and myriad species of birds, all while working one’s way along a rustic trail through a dark and humid jungle. Views from the mountain’s summit include the nearby Bay Island of Utila, as well as a bird’s eye view of a beautiful coral reef in the Caribbean Sea below. This coral reef, and others like it in the Bay Islands, is known for some of the best diving in the world (funny how all Caribbean destinations like to claim “the best diving in the world”). Note: Credit should also go to SP member cp0915 whom originally submitted the peak and provided much of the original text. 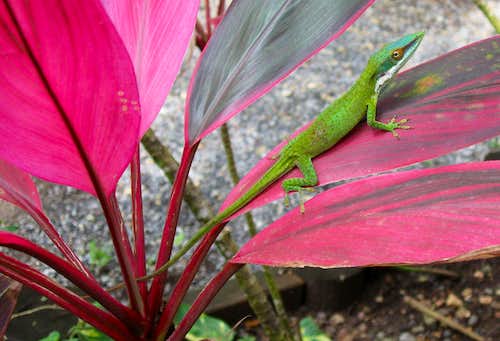 Here is a little information about Roatan (since the mountain is not likely the only reason you’ll be visiting). Roatan is one of the three “major” Bay Islands of Honduras, the others being Utila (only 3 miles long - and known specifically for its world-class diving) and Guanaja, Roatan is less than 100 miles from the mainland town of La Ceiba. The island is a thin, east-west trending island known for its beautiful forests, low tropical mountains, an awesome coral reef, and excellent fishing. Its people are friendly, apparently happy, and jaw-droppingly poor. In disturbing contrast to the poverty seen in such towns (villages?) as the curiously-named Coxen Hole, many high-dollar resorts also litter the charming island. For those who care, and I’m not one of them, episodes from “Temptation Island” were filmed on the island. 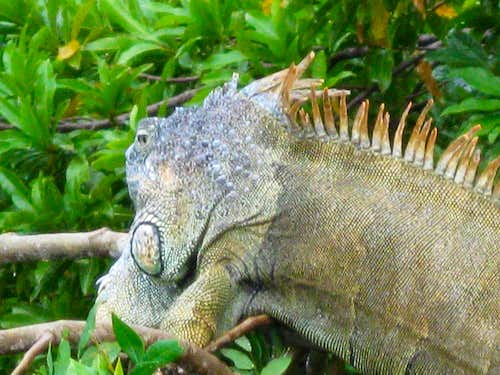 Iguanas are often seen on Cerrro Carambola. Locals know them as "wishywillies".

Getting to the Island

There are two common ways of getting to Roatan – by flight or by boat. Air Several major airlines fly to Roatan from the Honduran cities of Tegucigalpa, La Ceiba and San Pedro Sula. . The short flights to Roatan from La Ceiba, for example, cost about $42 each way (2008). Believe it or not, Continental Airlines also offers twice-weekly flight service directly to Roatan from Houston and Delta has once a week service from Atlanta. Ferry Most people probably come in by ferry and it’s the easiest way to get there (unless flying directly). As of December 2008 the ferry from La Ceiba cost about $21. The Galaxy Wave Ferry leaves La Ceiba for Dixon Cove on Roatan at 9:30 AM and 4:30 PM every day and returns from Roatan to La Ceiba 7:00 Am and 2:00 PM. Cruise Ship Several major cruise lines, such as Norwegian, offer destinations to Roatan on some of their itineraries if you are that type of traveler. 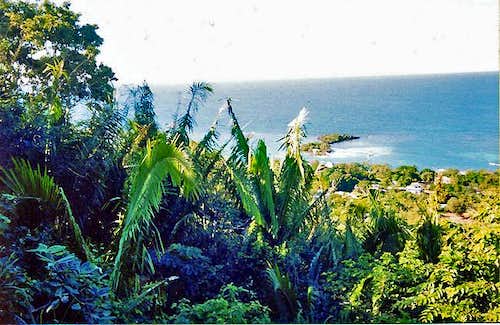 Getting to the Peak

Carambola Mountain is located within Carambola Botanical Gardens at Sandy Bay, on the on the southwestern portion of the island. Though close to nearby Coxen Hole, the Botanical Gardens are too far (and potentially too dangerous) to walk to. Any of the numerous cabbies in Coxen Hole will bend over backward to sell you a ride to the Gardens, which are located along the main road in Sandy Bay, and directly across the street from Anthony’s Key Resort – all of the taxi drivers will know where it’s at. Expect to pay $15-20 to be driven to and from the Gardens from Coxen Hole, including having the driver wait for you at the entrance to the Gardens while you hike/explore/sightsee. For an extra few bucks, you can easily talk your way into a tour of the western portion of the island too (history lesson included!). Minibuses also follow the route and are much cheaper than taxis (about $1 per ride). Buses are about every 30 minutes and start at West End or Coxen Hole, though you can’t take one directly from the Ferry to the Gardens. 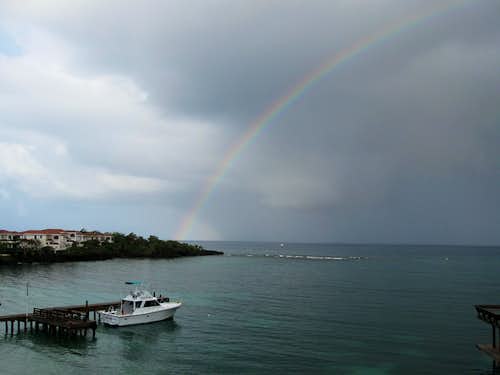 This is West End. Most people take a taxi from West End or Coxen Hole to the trailhead, but if you are on a budget wait for the minibus on the main drag along the coastline.

Once at the Gardens, you’ll see that it’s a fine place to visit. In addition to the exotic plants and flowers found at the entrance, you can check out the two nature trails the park offers. Both trails start at the entrance station. The “jungle path” gives itself up as a nice tour of Carambola Botanical Gardens, including some of the park’s wildlife, such as parrots and iguanas. The “mountain path” consists of a rustic loop trail, which climbs steeply and quickly to the summit of Carambola Mountain. The path is no more than one mile long, climbs maybe 500 feet, and takes all of 30 minutes to hike up and a few hours to do the entire loop and visit side tracks. The trail is wet and subject to wash-outs, and after a storm dangling vines are occasionally used for hand lines while overcoming the various minor obstacles encountered along the way…this all adds up to a fun and enjoyable mini-jungle experience. In December 2008 the trail was in good condition. The summit views are pleasing. Sit down and enjoy them – I suppose you earned it. 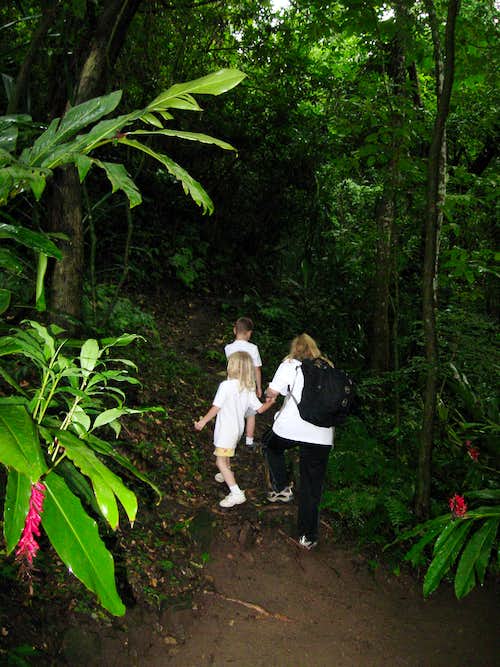 As mentioned by cp0915, the rainforest on Carambola is dark and somewhat hard to photograph even in the middle of the day.

As of December 2008 a $6 entrance fee is charged to visit Carambola Botanical Gardens. Once this financial obstacle is surmounted, you can hike the mountain without further intrusion.

Any time other than during tropical storms is a good time to climb. Roatan has a different climate than much of mainland Honduras. September through February is the wet season on Roatan and October through December is wettest of all, though hurricane season is June through November. Since it’s warm though, the rain isn’t much of a hindrance since the trail is nice and it didn’t bother us to walk in the rain. Avoid the island during hurricanes!

Camping and Places to Stay

Camping is forbidden on the island unless you get permission from a local land owner. If you do want to stay somewhere in the budget price range, make sure to book in advance as we found all the budget places full and had to stay in a relatively expensive place. For those not on a budget, Anthony's Key is right across from the trailhead. It isn't cheap, but is highly rated by all travel guidebooks.

Hey Scott, Thanks for all the detailed, up-to-date and corrective info on Carambola. I'd be happy to integrate the info into the page, however, I'd more happily give you ownership of the page. Interested?!? CP

Consider it yours, my friend.

I integrated the updated info. Check the page and see what you think.