The Dutch side of the island is smaller, but has a higher population, the international airport, and more tourists.   The French side the best hiking trails and before 2017 had the most famous beach.   The famous Orient Beach was wiped out by Hurricane Irma in September 2017.   The hurricane devastated much of the rest of the island and the tourist facilities as well.   When I was there in December 2018 it is said that tourism is down 76% from pre-hurricane levels.   It seems that things have been getting back to normal though.

Pic Paradis has several spectacular viewpoints and some nice forest.  The summit itself however is no paradise and is festoon with many radio towers, some of which are rather unsightly.

Hiking the trails around Pic Paradis is a good way to get some exercise and to take a break from the beaches. 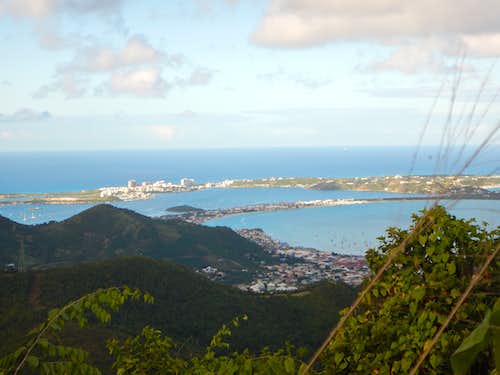 The airport at Sint Maarten (SXM) is served by several airlines and is a major hub.  Most tourists seem to stay in the Simpson Bay area which is near the airport.

From the airport or Simpson Bay, you can take a taxi, bus, or rental car to Marigot, the interesting capital of the French side of the island.  From Marigot, take a taxi, bus, or rental car along the main road north to the community of Rambaud (pronounced Rambo).   You can walk to Pic Paradise from Rambaud or you can drive the signposted steep road all the way to the summit.   I wouldn't recommend driving to the summit.  Break-ins are a chronic problem at the summit area and I wouldn't recommend leaving a car there.

The main steep concrete road (the Rue du Pic Paradis) actually leads to a parking lot to where there is a trail to the summit of Pic Paradis.  A rough 4wd road does branch off the main road and goes to the summit, but it's better to start at the end of the concrete road.  Once again, be aware of break-ins here and walking to here is recommended.

Part way up the concrete road to the summit is a road to the right leading to the Loterie Farm Activity Center.  This is another starting point to hike to the mountain and is said to have the most scenic trail to the summit, but it does require a fee. 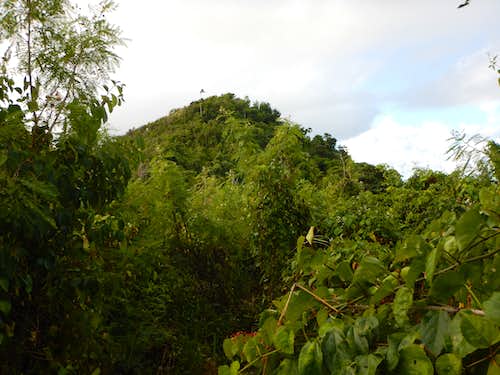 From near the end of the concrete road known as Rue du Pic Paradis, there is a marked trail to the summit area along with a trail to an overlook. This only takes a half hour or so round trip, but since the area is prone to break-ins, walking from near Rambaud is recommended.  This will take at least a few hours. 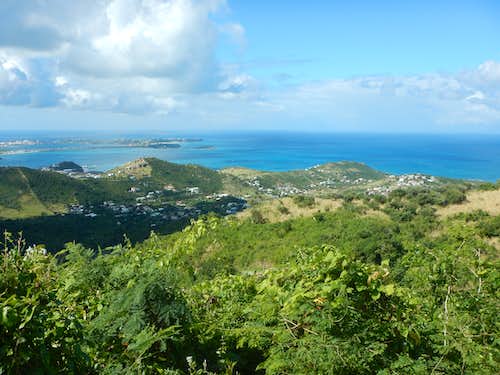 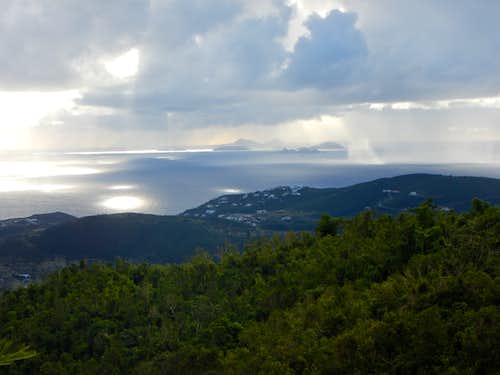 Looking east from the overlook near the summit.

This is said to be the most scenic route on the mountain and passes two waterfalls, but a guide and fee is required.  Check at the Loterie Farm for details.

This is probably the best hike on the island.  From the parking lot at the end of the Rue du Pic Paradis (which is south of the summit itself), this trail heads south along the main crest of the island to all the way to the south coast via several branching trails.

I hiked this trail to Mont Flagstaff at the border between the French and Dutch sides of the island, but the trail disappeared there.   It was a pretty good trail on the French side, but once I got to the border, the trail simply disappeared.  I made several probes into the forest looking for it, but never found a trace.   Apparently the French side of the island still maintains the trails and the Dutch side has allowed the vegetation to reclaim the trails shown on the maps?    I was able to see roads below, but since I couldn't find any trace of the trail, I decided not to bushwhack through the thick vegetation and I returned the same way.   I then walked back to Margot and took another minibus back to the hotel.

Of note, the trail was in pretty good condition, but there were several spider webs (with spiders in them) across the trail in many places.  The spiders aren't dangerous, but this was probably the most challenging part of the hike.   You have to pay attention where your feet are going since there are rocks and stick on the trail, but you have to pay attention to the space directly in front of you or you would walk right through spider webs and have the spiders on your face, neck, or shirt.  This happened several times to me on the hike. 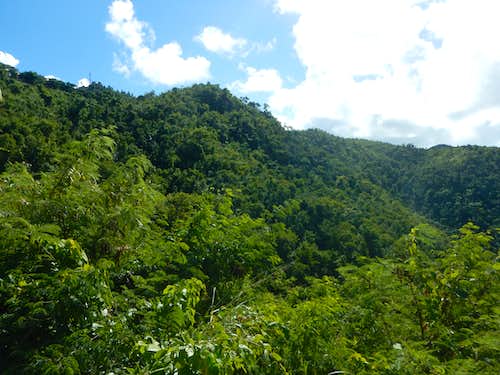 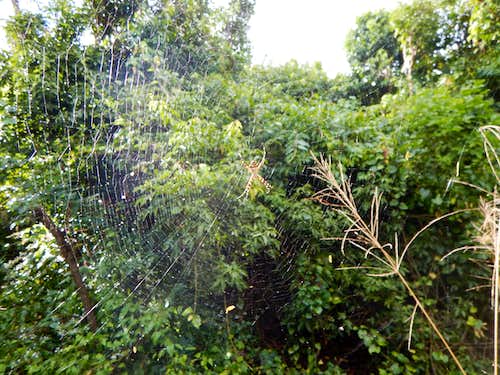 Unless you start at the Loterie Farm, there is no red tape, so please take care of the area.

Camping is not allowed on the island.   There are several lodging options all around the coast of the island.  The most popular area to stay is at Simpson Bay on the Dutch side and near the airport.

The summit can be visited year round as long as the weather isn't extreme. If you plan on hiking the trail to the south towards Mont Flagstaff, the drier season is preferable. Also, be aware hurricane season. August through October have the highest chances of hurricanes. There are no real dry seasons on the highest slopes of the mountain, but some seasons are certainly wetter still than others. Bright sunshine or heavy rains are possible at any time. On average, February, March and April are the driest months, followed by December and January. June through November are wetter, although the difference from the dry season is not always dramatic. From about mid-December through early May is the best time to climb, but even in the driest seasons, it rains frequently up high.

Weather averages for the Camp Jacob (Guadeloupe) at an elevation of 1750 feet/533 meters are below. Information is from the book World Weather Guide, page 323. Although Camp Jacob is on Guadeloupe, weather conditions at Camp Jacob are more representative of climate of Pic Paradis than the weather stations near the coast, though Pic Paradis will be a bit warmer and drier than Camp Jacob.