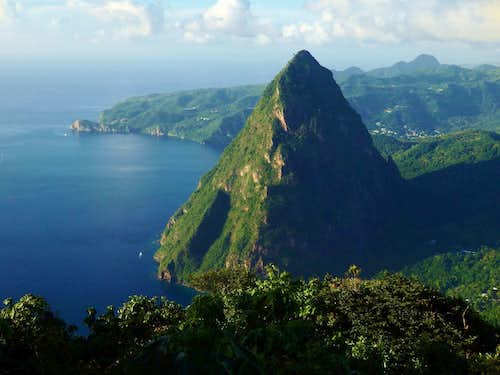 Petit Piton seen from the North Summit of Gros Piton
Petit Piton is the iconic peak of Saint Lucia, the feature of countless travel posters and website banners, the backdrop for a thousand destination weddings every year, the centerpiece of country's flag. But not many visitors to the island venture up it. Access is somewhat restricted, and many islanders will tell you the mountain is closed. And it is a much more difficult climb than its heavily promoted (and equally beautiful) twin, Gros Piton. A lot of nonsense is circulated about Petit Piton. Many a Saint Lucian spins an elaborate tale about how Petit Piton is higher than Gros Piton--that Gros Piton is so named only because it is fatter, but not higher, and so forth. But the truth--as anyone who has climbed both will attest--is that Petit Piton is the smaller peak, distinguished not by its size but by the precipitous angle of its slopes on every side. Should you try this climb? Maybe not. Frankly, if I were climbing just one peak on Saint Lucia, I'd pick Gros Piton--you get to start from the wonderful village of Fond Gens Libre and make your way to a higher summit after passing through a zone of stunningly gorgeous rain forest, an experience mostly absent on drier Petit Piton. Moreover, where Gros Piton is a steep hike, Petit Piton is a scramble, and not such an easy or safe one at that. If you miss your footing on the damp rocks near the summit at the wrong time, it's a long, long way to the ocean below. People with a fear of heights should skip it, and--because of a squeeze chimney on the route--so should people who struggle with their waistline. If this hasn't dissuaded you, read on.

Petit Piton is located two kilometers south of the pretty town of Soufrière on Saint Lucia's west (Caribbean) coast. By rental car or taxi, it's about 45 minutes north of the big airport at Vieux Fort, and a good hour and a half over the tortuous but spectacular road from Castries, the capital. It's marked on this map of the island, and shown more locally on this Soufrière District plan. Beyond that, I'm not going to tell you how to get there. Every page I've published on Summitpost celebrates do-it-yourself, guideless hiking and mountaineering, but this one is an exception. You should get a guide for Petit Piton. Here's why: -- There's just one viable route, and it starts on private land that you don't have permission to cross. -- The trail to the upper mountain is maintained by the guides. -- Near the top, you will almost certainly use the fixed ropes, at least for security. These are placed and maintained by the guides. Most people enjoy their guides who, on this island, seem to be pretty genuine people. Guiding is good work that has helped to provide an economic base and incentive for preservation of natural areas.

How to Get a Guide 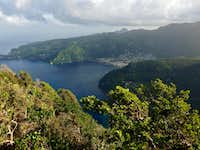 North from the balcony
There is really only one route up Petit Piton. Because of the tropical vegetation smothering every square inch of the upper mountain, climbing by any route other than the established one would be a vertical, technical bushwhack of stupendous proportions. From the hidden trailhead somewhere on the access road to Sugar Beach Resort, the route up Petit Piton starts as a trail climbing steeply through dry forest. The path crosses the north face before bending around to a balcony--a kind of rocky fin--high on the seaward western side of the peak. 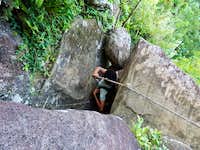 In the rabbit hole
At about 2000 feet, and with breathtaking views over Soufrière and straight down to the reefs of Petit Piton Marine Reserve, the balcony makes a good consolation prize for those disinclined to climb any higher. The ascent to the balcony is certainly an adventurous and sometimes airy hike, but it involves only light scrambling, not even rising to YDS class 3. From the balcony, the top is only a few hundred feet above, but the going is more challenging. There are three short YDS class 4 sections. The first is a short face with some real exposure (although greenery hides the extent of the drop, so it doesn't feel as scary as it might). The holds are big but they tend to be slimy. A knotted fixed rope can provide extra security, but I have seen one person take an alarming swing while dangling from the rope by one arm. The second crux is a low-angled chimney without exposure; it's awkward, and it involves a mid-fifth class move or two unless you use the fixed rope to muscle up it. The third crux, with minor exposure, is called the "rabbit hole;" it is likewise awkward but goes pretty easily with or without the rope. The summit of Petit Piton is everything you could hope for, with a miniature grassy meadow to flop in while you admire ocean and mountain views in every direction. If they're not enfolded by storm clouds, all the major peaks of Saint Lucia are visible, the close-up view of Gros Piton being especially impressive. From the sea-level start, most people will spend 1.5 to 3 hours getting to the top. 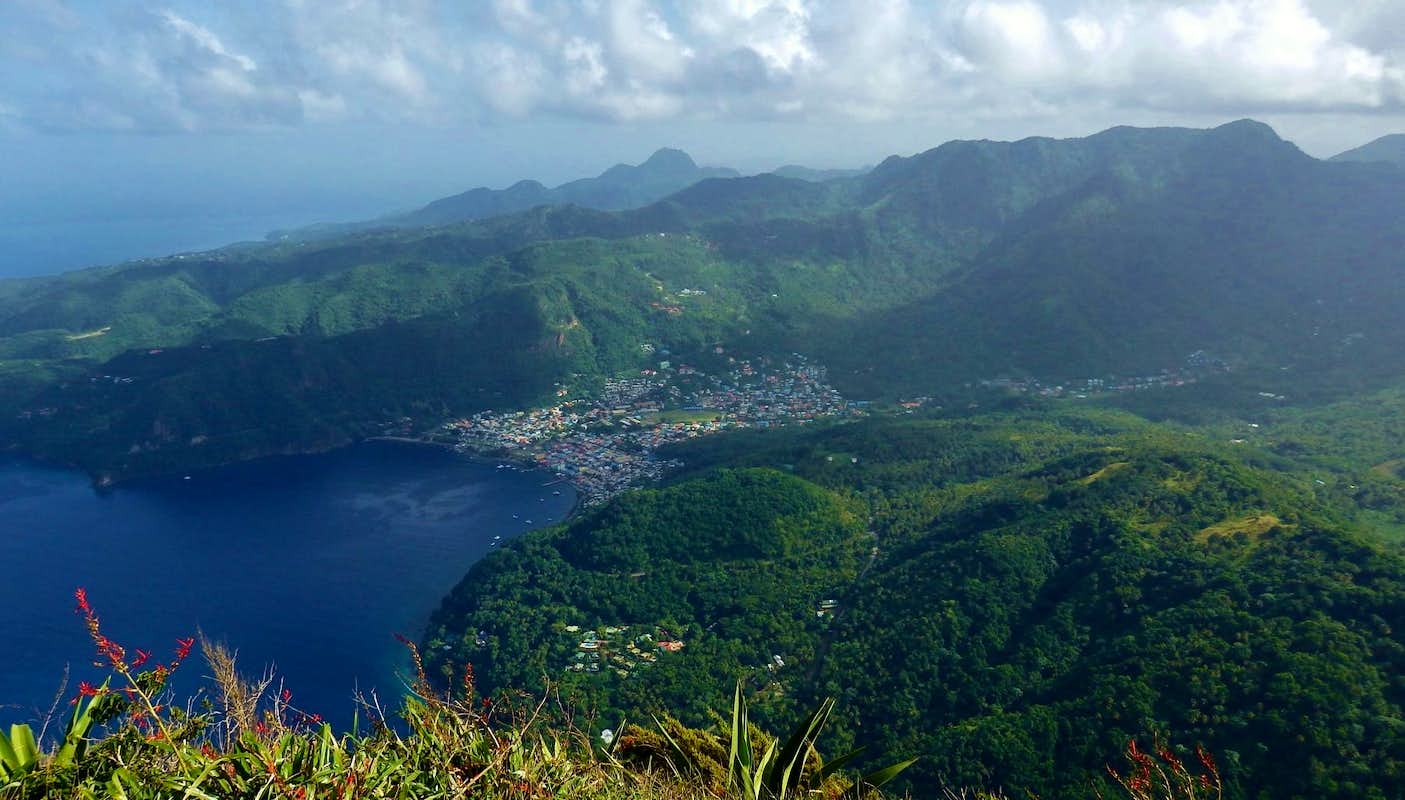 Looking up the west coast of the island, with Soufrière in the foreground

Camping on or near the mountain is not practical. Good nearby lodging includes La Haut Plantation (about US $150 double B&B; awesome views of the Pitons); Crystals (quirky, unique, and a little more expensive; even better mountain views); and Fond Doux (restored cottages 1 km east of Petit Piton). For relatively budget accommodation (about US $75) there is the Downtown Hotel in Soufrière, and Mango Splash (located on the beach about 15 km south).

Petit Piton is made up entirely of dacite (a volcanic rock similar to basalt) that is about 260,000 years old--i.e., very recent in geologic terms. It represents the core of a lava dome volcano that formed along the western edge of a large preexisting caldera from a collapsed stratovolcano. The caldera was centered around the present-day sulfur springs a couple of kilometers to the west of Petit Piton. The area is still volcanically active but, apart from minor steam explosions, there have been no eruptions on Saint Lucia in the last few hundred years. Saint Lucia is fortunate to be spared these events, since neighboring Martinique and St. Vincent have been afflicted by the first and ninth most deadly eruptions of the twentieth century, respectively. 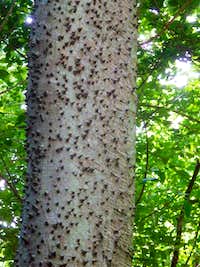 Petit Piton does not seem to be massive enough to waylay the rain clouds as much as its twin, and it lacks the stunning rain forest found on top of Gros Piton. In fact, the lower slopes of Petit Piton can seem a little parched. That said, there are plenty of interesting plants to admire, such as the thorn tree pictured at right. The famous flora of Petit Piton--well, fauna, technically--is the coral found on its submarine slopes; wall dives below the mountain are considered among the best in the Caribbean.

The weather in Saint Lucia is uniformly hot year-round. You'll do best to start your hiking by 6:00 a.m. Rainfall in the wet season (June-November) is about double the remainder of the year, but showers can occur at any time and, conversely, long stretches of gorgeous weather are possible even in the wettest months. Hurricanes are relatively infrequent in this part of the Caribbean.

The Battle of Rabot 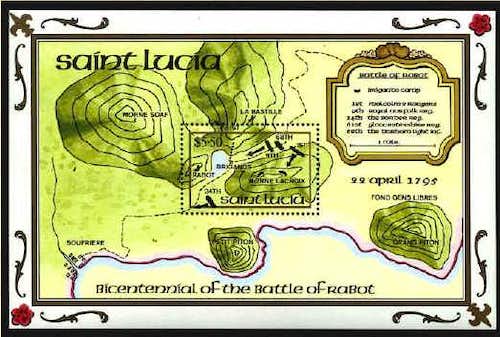 Between the 1630s and 1803, Saint Lucia had a crazy history of see-saw struggles and treachery between the British and French, slavery and slave rebellions. Some of the most fascinating aspects of this unfolded on and around the Pitons, an area that was a refuge for runaway slaves. Indeed, Fond Gens Libre, the current base for the Piton guides, started as an important settlement of "gens libre"--free people--whose proud descendants live there still. Petit Piton was at the center of this struggle in April of 1795, in a battle that shook the confidence of the British Empire and had parallels to Custer's later debacle at the Little Big Horn. The French Revolution had swept through the Caribbean, with slaves abandoning the French plantations in Saint Lucia en masse and organizing--with support from revolutionaries back in France--into Armée Française dans les Bois (French Army in the Woods). The British called this black army the "Brigands" and were determined to stamp them out. They landed 600 regulars and 400 auxiliary troops in southern Saint Lucia and marched confidently through Laborie and Choiseul in a bid to overwhelm the rebel stronghold of Soufrière. Just two kilometers short of their objective, in a little defile at Rabot under Petit Piton, the "Brigands" stopped the redcoats with a road block, then snapped the trap shut with coordinated forces to the south and on the slopes above. As afternoon turned to evening on April 22 and the shadow of Petit Piton thrust like a lance across the Rabot battlefield, the British force found itself pinned down in a natural shooting gallery, almost out of ammunition. They managed a bedraggled retreat to Choiseul after nightfall--though in the words of the History of the British Army, "the men were so much exhausted that they could hardly drag the [artillery]." They left a hundred and seventy officers and men dead along the march, and soon abandoned the island entirely. It seems to have been the first time so large a force of British regulars had suffered a significant defeat at the hands of a black foe, and the army history recorded it as "disconcerting." Of course, the Empire always strikes back, and eventually the British juggernaut would overcome the Brigands. In 1797, the Brigand army surrendered, on condition that its members would not return to slavery; instead, they became the core of one of the West India Regiments in the British Army. 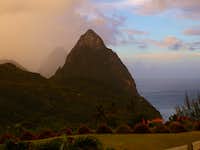