Mount Liamuiga is a 3,792 feet (1,156 m) stratovolcano which forms the western part of the island of Saint Kitts. The peak is the highest point on the island of Saint Kitts, in the federation of Saint Kitts and Nevis, and in the entire British Leeward Islands, as well as one of the tallest peaks in the eastern Caribbean archipelago. The peak is topped by a 0.6 miles (1 km) wide summit crater, which contained a shallow crater lake until 1959. As of 2006, the crater lake had re-formed.[1] The last verified eruptions from the volcano were about 1,800 years ago, while reports of possible eruptions in 1692 and 1843 are considered uncertain.

Mount Liamuiga was formerly named Mount Misery. The renaming took place on the date of St. Kitts' independence, September 19, 1983. However, many older citizens still refer to it as Mount Misery. The name Liamuiga is derived from the Kalinago name for the entire island of St. Kitts, which means, "fertile land."

The mountainsides are covered in farmland and small villages up to the 1,500 feet (460 m) height, after which lush tropical rainforests drape the slopes until cloud forest takes over at 3,000 ft (900 m). Many tours and guided hikes are organized to the peak's summit and surrounding rainforests, usually starting from Belmont Estate in the village of St. Paul's. From the summit, the views are outstanding, including the entire island and the beautiful Caribbean Sea, as well as the neighbouring islands of Saba, Statia, St. Barths, St. Martin, Antigua, and Nevis.

Trail leaves from the Saddlers area on the eastern side of the island. Understand that many locals claiming to hike to the summit in fact only go to the crater rim which is far lower then the summit. These hikes leave from the western side of the mountain. The drive to the trail is through abandoned sugar cane fields. You will need an off-road capable vehicle. After its a hike through mango trees and then into the rain forest. The trail does get steep in places and very muddy. There are ropes in place in the spots where it is needed. The trees become smaller the higher you climb and at the top is smaller vegetation and windy. On top is a mailbox with a climbers log and mad-libs inside. 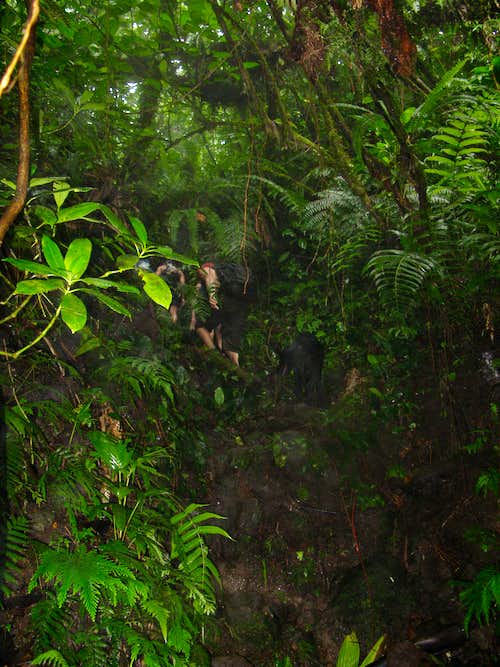 You can camp in the crater but as of right now there is no trail leading from the summit into the crater.

Woops - please check your elevation for this peak. It reads 3 feet / 1 meter. Be careful to eliminate any "," or "." from your elevation when inputting it to the mountain page. Cheers, Sarah

thanks must have been the comma.. I am from Florida so 3 ft is kinda like a mountain here lol but didnt mean to enter that