The Quill is the highest summit on the Island of Sint Eustatius.  Sint Eustatius, usually known by its nickname of Statia is one of the less touristy islands in the Caribbean.   There are no famous beaches (though beaches do exist-usually made of black sand) here and little nightlife or casinos.   There is great hiking though.  The island is made of volcanic peaks, but The Quill dominates them all.

Statia is a dry island by Caribbean standards, but The Quill receives more moisture and has rain forests.  The crater is rather impressive as well.

The last eruption of The Quill was 1600 years ago and the volcano is considered to be dormant.

Expect a good hike and interesting scenery, vegetation, and wildlife when climbing The Quill.  The rainforest is interesting and the views are spectacular. 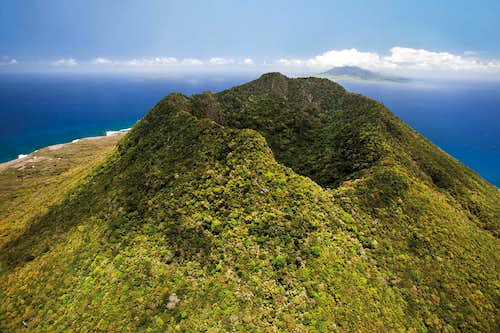 Getting to Sint Eustatius

Almost all visitors arrive in Sint Eustatius by air.

From Sint. Maarten, Winair has several flights a day to Sint Eustatius, via Saba, a 15-minute hop for each leg. Since you have to stop in Saba anyway, you might want to stop there for a day or two to do some hiking or diving.By air: Several carriers take you to Sint Maarten on Netherlands Antilles (SXM).

From Anguilla, Trans Anguilla has flights from Anguilla, Sint Maarten, and Saint Kitts. Taxi or walking is the best way to get around, as the island is not that large. Valid passports are required for all visitors including US and Canadian citizens. A round trip or onward ticket is officially required.

The US dollar is the currency used here. It is recommended that you exchange your money before getting to Sint Eustatius.

Getting to the Trailhead

The trailhead is near the end of Rosemary Lane.  At the four way intersection of Rosemary Lane, Welfare Road, and Simmons Lane, follow Simmons Lane to the end.   It is easy to take a taxi to the trailhead.  with a map in hand, you can also walk.  You can download a map to The Quill using the following tourist office link:

Map of The Quill Trails 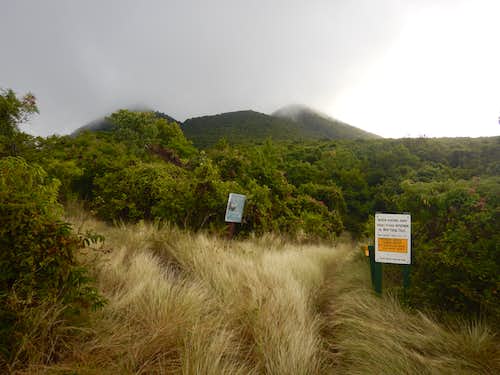 The Quill as seen from near the trailhead.

There are many possibiblities here.  See the map below for the trails on The Quill. 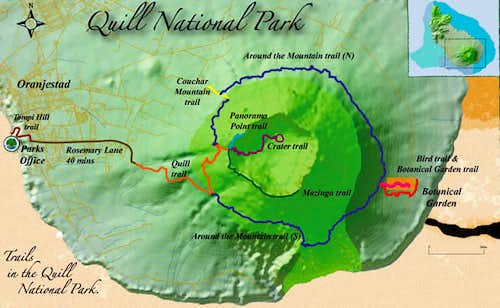 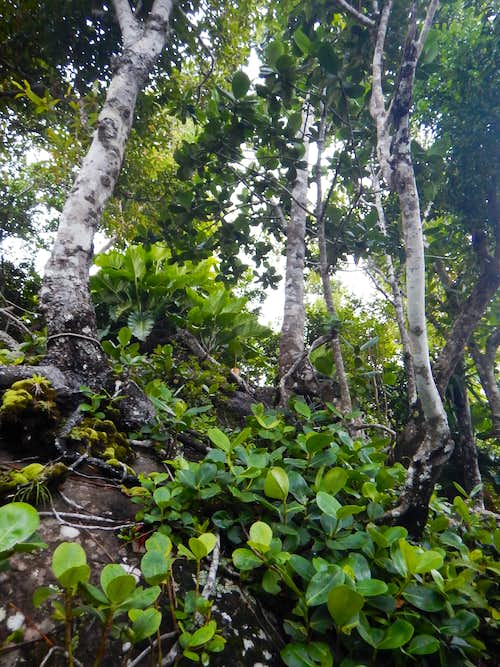 Vegetation near the summit of Mazinga.

From the crater and end of the Quill Trail, you can also turn left and follow the Panorama Point path to the northern crater rim. 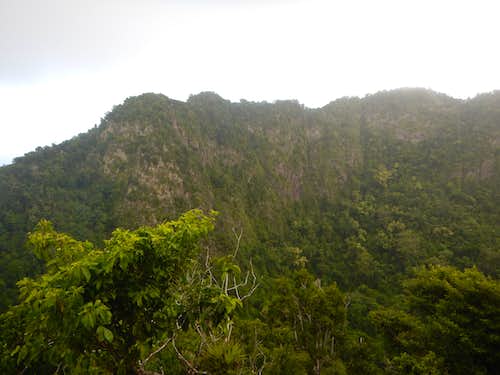 Perhaps the most interesting trail is the Crater Trail into the crater itself.   The vegetation is really lush and there is wildlife as well.  The trail is steep and there are stairs in places.

The Around the Mountain Trail circles the mountain.

The Couchar Mountain Trail is an alternative trail to the crater.  Is is the shortest route to the crater, but getting to the trailhead is more complicated.

To give an idea of distance, hiking to the summit of The Quill via the Quill Trail and Mazinga Trail, along with the trail to the bottom of the crater, will take about a half a day to do both.   If you want an all day hike, add the Around the Mountain Trail to the visit to the summit and crater.

You are supposed to pay a small fee to use the trails on The Quill.  Unfortunately, there is no indication of this until you are already part way up the trail.   You can buy the pass at the Gin House in Oranjestad or at the tourist office near the south end of the main road along the coast in Oranjestad.

The trail to the crater rim can be done year round as long as the weather isn't extreme. If you plan on descending into the crater or climbing to the highest point on the crater rim, the drier season is preferable. Also, be aware hurricane season. August through October have the highest chances of hurricanes. There are no real dry seasons on the highest slopes of the mountain, but some seasons are certainly wetter still than others. Bright sunshine or heavy rains are possible at any time. On average, February, March and April are the driest months, followed by December and January. June through November are wetter, although the difference from the dry season is not always dramatic. From about mid-December through early May is the best time to climb, but even in the driest seasons, it rains almost every day up high.

Weather averages for the Camp Jacob (Guadeloupe) at an elevation of 1750 feet/533 meters are below. Information is from the book World Weather Guide, page 323. Although Camp Jacob is on Guadeloupe, weather conditions at Camp Jacob are more representative of climate of The Quill than the weather stations near the coast.