Pico Duarte is the highest mountain in all of the Caribbean Islands, and it is located in the central portion of the mountain range known as the Cordillera Central. In contrast to most of the rest of the mountains in the Caribbean Islands, the Cordillera Central is not composed of volcanoes, but is instead made of sedamemtary and metemorphic rocks that have been uplifted into the sky. The mountain is covered with cool pine forest and ferns, and the mountain makes a cool break from the heat of the tropics of the Caribbean. Pico Duarte also has a twin summit that is called La Pelona, only two meters lower, separated by a col that's about a mile long. Several routes are available, and all usually take two days or more to hike, depending on the route. This is definately the prime backpacking destination on the Caribbean Islands. On clear days you can see the ocean/sea both to the north and the south from the summit.

Surprisingly, Pico Duarte did not see its first ascent until 1944 when it was climbed to celebrate the independence of the country. Now days, up to 3000 people per year make the ascent.

The mountain is named for Juan Pablo Duarte, one of the founding fathers of the Domincan Republic. The mountain was formerly called Pico Trujillo, during the tyranny of it's namesake dictator.

A few years ago, there was a huge fire that destroyed most of the forests in the national park that includes Pico Duarte. Even the forests in and around Valle Tetero were burnt out. For this reason, the views were disappointing. I was also disappointed because no one on the Internet blogs had mentioned this beforehand. So I’m telling you now. 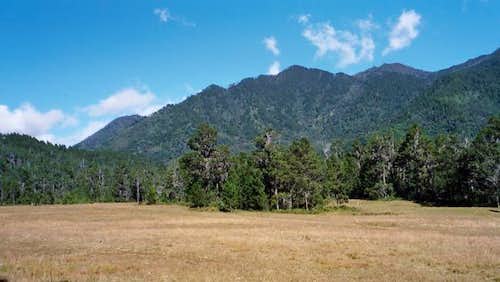 Most people will begin in Santo Domingo. From Santo Domingo, you must make your way to Jaracaboa. Caribe Tours is the bus company that has transport to Jaracaboa. The bus leaves Santiago four times a day from the Caribe Central Bus Station. The journey takes 2.5 hours and cost $5 in December 2004. There are several hotels in Jaracaboa and this is the logical place to arrange a required guide (park service requirement) for Pico Duarte.

From Jarabacoa, you will need to arrange transportation to La Ciénaga. In December 2004 this road was in very bad condition and we had to get out and walk to avoid bottoming out in several places. There is one very narrow bridge that only a small vehicle can cross, and landslides often close the road. 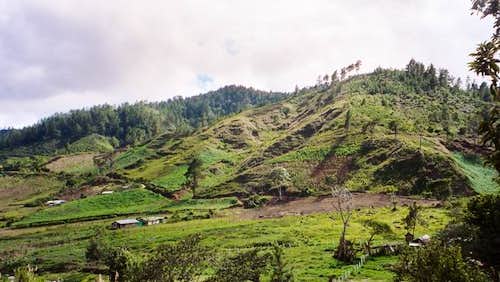 La Cienaga; the beginning of the trek.

These are meant to be overviews only. Click on the route page links for detailed descriptions of the La Ciénaga and Valle de Tetero routes.

This is by far the most popular route. It is also the shortest and easiest route. The route is 46 kms (29 miles) round trip with 2275 meters (7465 feet) elevation gain and usually takes 2-3 days. The route is steep and can be muddy in places, but is not difficult. 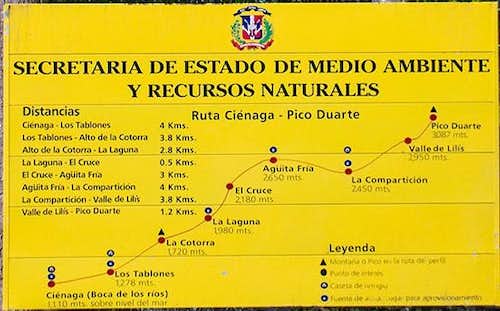 This trailhead sign shows the profile of the route. 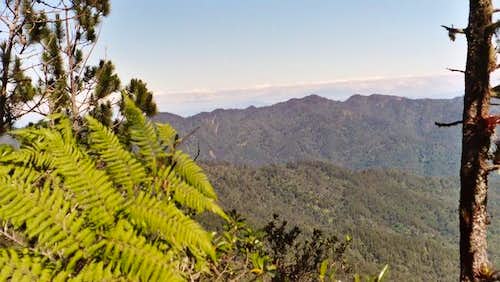 Along the trail on the La Cienaga Route.

This route starts at the same trailhead as the standard standard La Ciénaga Route, but is much more strenuous. The route is also more scenic as well, and the trip is well worth the effort. At least three days are needed to complete this route through the Valle de Tetero and to the summit. Four days are recommended.

The Valle de Tetero itself is the most delightful part of the trek, with nice waterfalls, huge pools, and mountain meadows surrounded by beautiful trees full of colorful parrots and other birds. There are ancient petroglyphs in the valley as well. I would recommend spending a layover day in the valley as it is a real paradise. 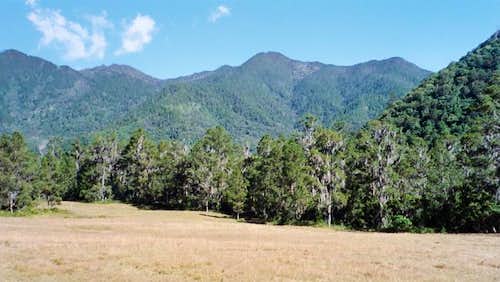 Along the Valle de Tetero route to summit.

This route begins at a huge dam; the Presa Sabaneta. The route is 96 kms (60 miles) round trip with a total of 3802 meters (12474 feet) elevation gain and usually takes 6-7 days to complete. This route joins the Mata Grande route at a place called La Pelona.

This route begins as Las Lagunas and is considered to be one of the more strenous routes on the mountain. The route is 108 kms (67 miles) round trip and usually takes 6-7 days. This route joins the Valle de Tetero route in the valley itself.

This route begins at Los Corralitos, 8 kms (5 miles) east of Constanza. It is considered to be the most strenous and difficult trail on the mountain. The round trip distance is 86 kms (53 miles) and usually takes 6-7 days. This route also joins the Valle de Tetero route in the valley. 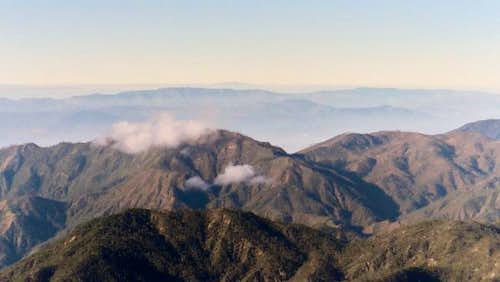 View from summit. This is looking north.

Park permits are required (about US$ 5 for each person in 2004). All persons are required by the national park service to higher a local guide, and you are not allowed to enter the park without one. The guide will almost certainly insist that you hire mules as well. We paid $130 per person for a 4-day trip including mules and a guide, park fees, and transportation to and from Jaracaboa. This was in December 2004.

For more up-to-date info on prices visit www.ceiba.gov.do (Spanish) and click the links that say Pico Duarte or Cordillera Central.

The mountain is usually climbed between the months of December and March, which is the driest season. This time of year is slightly cooler as well. Expect heavy rains (even in the dry season) or cold weather at any time. 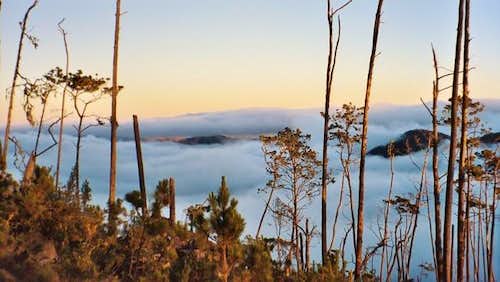 Looking down on the clouds from on the way to the summit. This is looking south.

Camping is allowed practically anywhere inside the park that has a clearing but it is asked that campers limit themselves to previously existing campsites and firerings. There are huts along the standard route at La Comparticion. Even though there is a cabin in the valley, you may want to chose to pitch a tent because the cabin sometimes attracts rats. There is also a hut in the Valley de Tetero along that route, but it has the same problem. The best way to get a good night's sleep may be to bring a tent and camp on any of the routes. Other than the standard La Ciénaga route and the Valle de Tetoro route, a tent is always required. There are plans to build huts along many of the trails, but tents are absolutely necessary on all other routes at this time.

Below is the weather forecast for Jaracaboa near the standard route trailhead. It will be cooler at higher elevations. 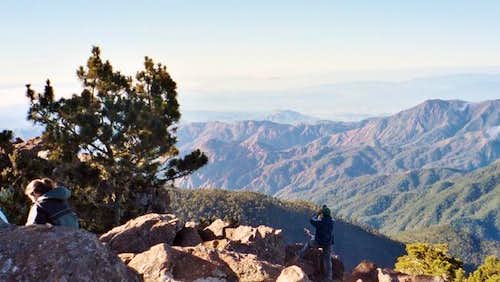 View from summit. This is looking northeast.