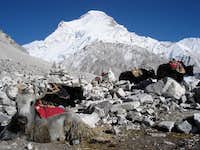 Basic facts and location
At 8188 meters, Cho Oyu is the sixth highest mountain in the world. It is located on the border of Tibet (China) and Nepal about 20 km to the west of Mount Everest.

Just west of Cho Oyo, at about the location of Advanced Base Camp, is the Nangpa La, a 5500 meter glacier pass which is a major trade route between the Khumbu Sherpas and Tibet. The border trade is a bit curious, as Nangpa La also is famous for illegal border crossings, but still authorities on both sides most of the time turn the blind eye on the trade. Long caravans with yaks can be seen here at all times of the year.
In the post-monsoon climbing season of 2006 all this changed dramatically, when Chinese border police shot some refugees to death at Nangpa La.

Some climbers claim that Cho Oyu is the easiest 8000 meter peak (if anything over 8000 meters can be called easy!). There's no really technical sections and the objective dangers are close to non-existent. Its relatively easy access makes it an attractive climb for someone with limited time, as it can be attempted in roughly 6 weeks round trip. Base Camp is accessible by jeep and it is possible to reach Kathmandu in a very long day from Base Camp.

Because of it's ease of access, ABC is often crowded with a large number of expeditions. There have been well over 1000 ascents so far.

This mountain has also recently become popular with ski mountaineers and snowboarders due to it's relatively low objective risk and good snow conditions, especially in the fall.

The name
Cho Oyu is translated in Tibetan as "the Turquoise Goddess", from chomo=godess and yu=turquoise. This derivation of the name is not certain and other "translations" of the name includes "Mighty Head" (Tichy) and "God's Head" (Harrer). Another alternative translation of the name is "bald god". This makes sense looking at a Tibetan legend, where Cho Oyu, the bald god, has his back turned to Chomolongma, the mother godess, because she refused to marry him. 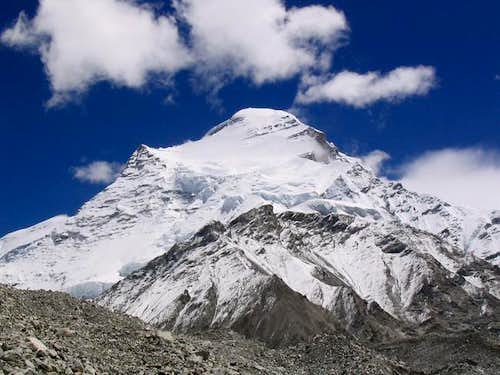 Cho Oyu 8188 meters - the sixth highest peak in the world. Photo from the Chinese side.

Cho Oyu was the 5'th of the 8000 meter peaks to be climbed. The order was: Annapurna, Everest, Nanga Parbat and K2.

http://www.tourism.gov.np/newsupdates.htm
"Effective from December 1, 2004 to November 30, 2009 for five years. Now, the royalty amount for seven members expedition team costs US $ 5000 (Five thousand) only."

According to http://www.tourism.gov.np/1310peaks.htm (if it is correct (and due to the state of their website it might not be)), shouldn`t the geo coordinates of the peak be:

(Where did you get your coordinates from?)

second ever ascent of an 8000 meter peak

Re: second ever ascent of an 8000 meter peak

Hmmm. Must be a rest from the former maintainer's info. "Second ascent ever of an 8000 meter peak". Really incorrect info! Thanks for proof reading. Info will change NOW!