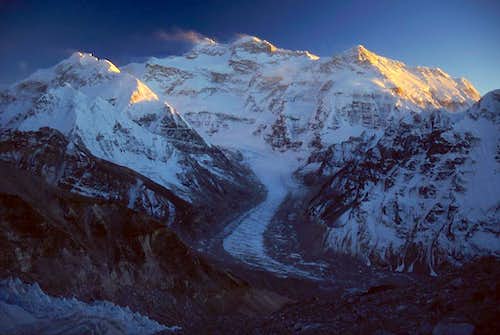 The north face of Kangchenjunga in evening light from above Pangpema. November, 1998

Kangchenjunga is third highest mountain in the world, and the most easterly of the 8000 meter peaks of the Himalaya. The name means Five Treasures of the Great Snow, a reference to its five summits. For those truly interested in such things the 1932 edition of The Himalayan Journal devotes 16 pages to discussing the origin of the word "Kangchenjunga". There was debate over it's Tibetan or Sanskrit derivation. If you don't have access to the Journal (it's in the university library where I live), or don't have the inclination to read 16 pages on this subject, the winner is Tibetan: Kang (Snow), Chen (Big), Zod (Treasury), Nga (Five).

The name is also spelled Kanchenjunga, but according to the Himalayan Journal article, people who know the Tibetan language strongly insist that the 'g' should be there.

The huge massif of Kangchenjunga is buttressed by great ridges running roughly due east to west and north to south, forming a giant 'X'. These ridges contain a host of spectacular 6-7000 meter peaks. On the east ridge in Sikkim, is Siniolchu (22,600' / 6888m), regarded as one of the most beautiful mountains in the world. The west ridge culminates in the magnificent Jannu (25,294' / 7710m) with its imposing north face. To the south, clearly visible form Darjeeling, is Kabru (24,002' / 7,316 m). The north ridge contains The Twins and Tent Peak, and runs up to the Tibetan border by the Jongsong La, a 20,080' (6,120 m) pass.

Kangchenjunga does not have an "easy" route as the threat of avalanche is high. Since it is in the eastern Himalaya it receives the brunt of the monsoon moisture.

The summit is considered sacred by the people of Sikkim. Early expeditions that climbed the mountain stopped a few feet from the top to respect this belief.

Kangchenjunga dominates the skyline of Darjeeling, the famous tea growing region and site of a hill station during the British Raj. Its proximity to Darjeeling has inspired a long history of prose, poetry, art, and exploration dating back to the mid-19th century, decades before eyes were turned to Everest. For a time Kangchenjunga was thought to be the world's highest peak. There is a Map of Hindoostan, Farther India, China, and Tibet, published in 1860 by S. Augustus Mitchell shows Kuncghinginga Mt. 28,178 ft. Highest known Mt. of the Globe.

Here are some highlights from early Kangchenjunga explorations, from the mid 19th to early 20th centuries:

I ... saw the sun drive away the veiling gray and touch up the snow-peaks one after another with pale pink splashes and delicate washes of gold, and finally flood the whole mighty convulsion of snow-mountains with a deluge of rich splendors. ... Mount Everest is a thousand feet higher, but it was not a part of that sea of mountains piled up there before me, so I did not see it; but I did not care, because I think that mountains that are as high as that are disagreeable.

I was told by a resident that the summit of Kinchinjunga is often hidden in the clouds, and that sometimes a tourist has waited twenty-two days and then been obliged to go away without a sight of it. And yet went not disappointed; for when he got his hotel bill he recognized that he was now seeing the highest thing in the Himalayas.

The first serious attempts to climb Kangchenjunga began after World War I. Here are some highlights:

It is interesting to note that the first three ascents were all by new routes. 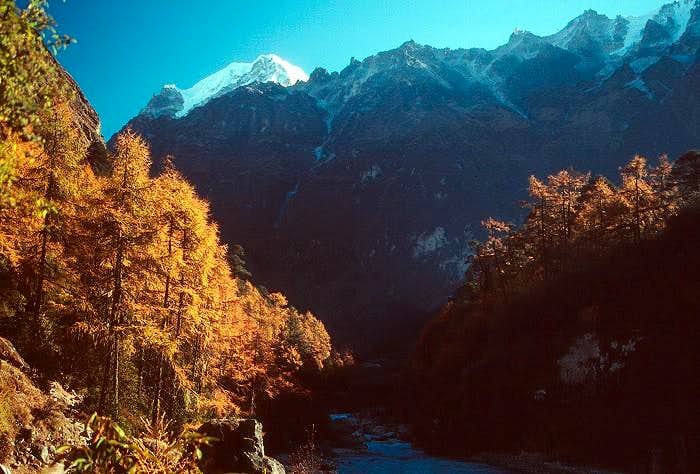 The region around Kangchenjunga offers some of the best trekking in the Himalaya, although every region makes the same claim. There are the now standard base camp treks in Nepal, and the Goeche La trek in Sikkim. In addition there are wild exploratory treks on the Nepalese north side of the mountain and the government in Sikkim is opening up the approaches along the Zemu Glacier which have been closed for years due to border disputes with the Chinese.

I climbed a small summit near Pangpema, Kangchenjunga's north base camp.
Please visit the Peak 5950 page for more information about trekking in this region. 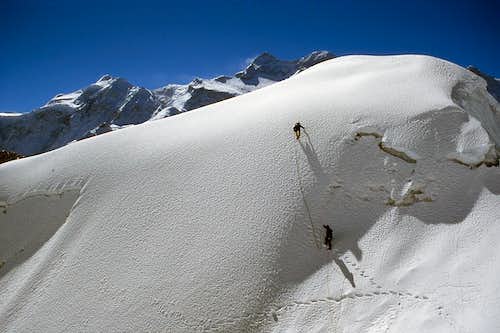 Nearing the summit of Peak 5950, Kangchenjunga in the distance

The Kangchenjunga Conservation Area has been set aside in the hopes of preserving this remarkably biodiverse eco-system. It covers an area of 2035 sq. km, and includes river valleys of dense sub-tropical and temperate forests, up to alpine tundra, and the crowning heights of the Himalayan ice peaks. The World Wildlife Fund has identified the Eastern Himalaya as one of the "Global 200" most important eco-systems on earth.

At lower elevations the forests contain tropical hardwoods. As you gain elevation these are replaced by oak and pine and larch, then fir, juniper, and rhododendron up to the tree line at about 14,000'. There are nearly 30 species of rhododendron, which provide an amazing flower spectacle in the spring, some 70 different types of orchids, and 3,000 flowering plants including the Tibetan blue poppy, one of the grand prize finds of the plant hunters like Joseph Hooker and F. Kingdon Ward.

There is a rich diversity of endangered wildlife including snow leopard, Himalayan black bear, musk deer, and red panda. Other animals include langur monkeys, ghoral, Himalayan tahr, and Himalayan blue sheep, or bharal.

Over 200 species of birds can be found in the region, including some extremely rare ones that live nowhere else. (For comparison of numbers, the entire United States has about 800 species). Birding is a side interest of mine. I have identified more than 50 species of birds in the region. This includes low elevation sub-tropical species such as the Blossom-headed Parakeet and White-throated Kingfisher, the middle hills Scarlet Minivet and Plumbeous Redstart, up to the high alpine Tibetan Snowcock, Black-headed Mountain-Finch, Red-billed and Yellow-billed Chough and the mighty Lammergeier or Bearded Vulture.

This natural diversity is matched with a wide range of human ethnic diversity and culture. The Limbu are the dominant ethnic group in the lower regions, while Sherpas inhabit the higher elevations. These Sherpas have a distinct culture and tradition from those in the Everest region. Other ethnic groups include Rais, Chhetris, and Brahmins.

Monasteries, chortens, temples, and prayer-walls round out the cultural heritage of this remarkable area. I am told that the wall murals at the small monastery at Ghunsa are 400 years old.

As mentioned above Kangchenjunga has attracted writers, artists, poets, and photographers for nearly 200 years. Here is a selected bibliography of books, most of which are in my collection.

A more thorough list can be found here: http://www.travelstained.com/books.htm, which lists much more material including various Himalayan and Alpine Club journal articles. In addition, probably the best site on the web for a review of Asian mountaineering literature is Bill Buxton's Mountain Books page.

The dates I give here are for the first English language edition. Most of the books are long out of print in the first editions. However, many been reprinted recently in either hardback or paperback. You can search Internet used book sites, or amazon.com for titles that interest you.

Boardman, Peter, Sacred Summits - A Climber's Year, 1982; Includes the 1979 ascent of Kangchenjunga with Tasker and Scott. Also climbs on Carstensz and Gauri Shankar.

Bremer-Kamp, Cherie, Living On The Edge, 1987; A winter attempt on Kangchenjunga, A heartfelt story as Bremer's husband Chris Chandler dies of altitude sickness high on the mountain.

Brown, Joe, The Hard Years, 1967; His autobiography, one of the classics.

Cameron, Ian, Mountains Of The Gods, 1984; An excellent general history of the Himalaya. Has a good account of the Rubenson and Aas attempt on Kabru.

Dingle, Graham, Wall Of Shadows, 1976; A New Zealand attempt on the north face of Jannu.

Evans, Charles, Kangchenjunga The Untrodden Peak, 1956; The account of the first ascent.

Freshfield, Douglas, Round Kangchenjunga, 1903; An early classic of Himalayan mountaineering literature. Freshfield's writing and Vittorio Sella's photography, an unbeatable combination. First editions are rare and expensive. It has been reissued in India. You might check amazon.com for it as well.

Hooker, Sir Joseph Dalton, Himalayan Journals, 1854; Another early classic, written by the great plant hunter. It has also been reissued in India, and the entire text is available on the web, including scans of 45 wood engravings.

Mason, Kenneth, Abode Of Snow, 1955; A history of Himalayan mountaineering through 1954, by the first editor of the Himalayan Journal.

Tasker, Joe, Savage Arena, 1982; The widely-acclaimed book which includes Tasker's expeditions on the Eiger, Dunagiri, Changabang, K2, and Kangchenjunga. Tasker disappeared on Everest, along with Pete Boardman after delivering the manuscript to his publisher.

These photos were taken from close to the same spot over a span of one hundred years. The view is looking down to Ghunsa, the largest Sherpa village on the north side of Kangchenjunga from the trail that eventually crosses the Mirgin La.

The first was taken by the great mountain photographer Vittorio Sella, the second by the famous alpinist and author Frank Smythe, and the third by an undistinguished trekker who carried a copy of Smythe's photo which he used to find the same location.